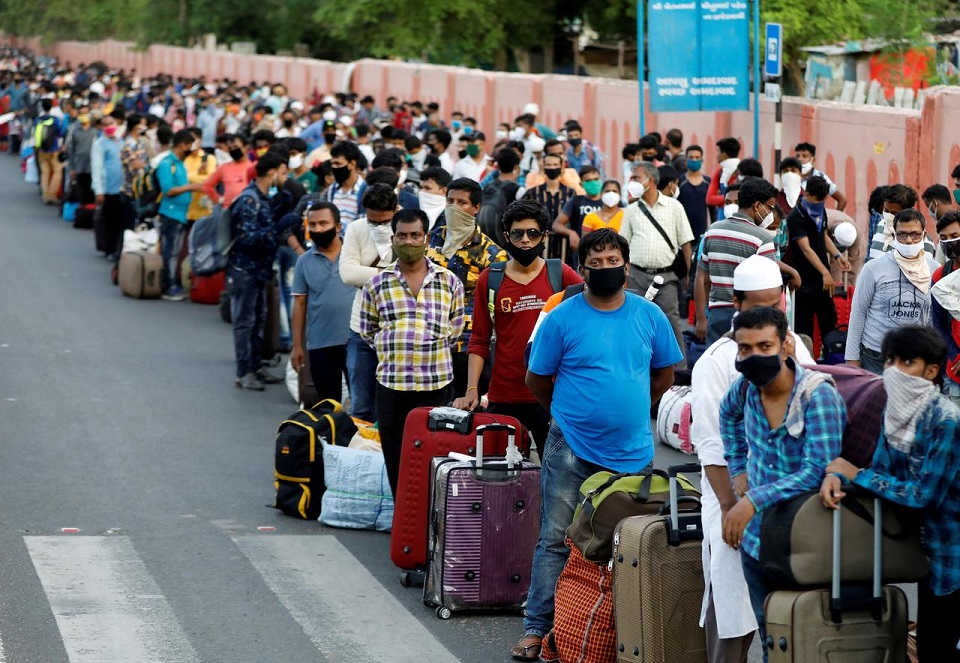 Migrant workers and their families wait in lines outside a railway station to board a train to their home state of eastern West Bengal, after authorities eased lockdown restrictions that were imposed to slow the spread of the coronavirus disease (COVID-19), in Ahmedabad, June 18, 2020. REUTERS/Amit Dave

Given India’s high population density, experts have long worried that a sustained COVID-19 outbreak would lead to pressure on its stretched healthcare system.

Prime Minister Narendra Modi lifted most restrictions that were part of a nearly three-month nationwide lockdown on June 8, despite the continuing rise in cases.

Data from India’s federal health ministry on Friday showed an additional 13,500 cases over the previous 24 hours, with over 300 deaths.

India now lags only the United States, Brazil and Russia in total number of infections and has reported four times more than China, which has a similar size population and is where the virus originated late last year.

On Friday Tamil Nadu imposed a lockdown with tough restrictions in Chennai and surrounding districts until June 30.

Roads in Chennai, known as “India’s Detroit” for its large car-making industry, were largely empty on Friday and most shops were closed amid heavy police patrolling to ensure adherence to the rules.

“Police officers and medical professionals are fighting for you. Please cooperate and be hopeful,” Tamil Nadu state Health Minister C Vijayabaskar said in a tweet on Friday.

“Let’s follow social distancing, stay aware and win this battle against this pandemic.”

Tamil Nadu has tested over 800,000 people for COVID-19 - the highest number in the country - and its mortality rate is nearly a third of the national average. But it has been facing criticism over delayed reporting of deaths, and the number of cases and casualties have been rising steeply in recent days, mainly in and around Chennai.

Restrictions elsewhere in India, where states have their own powers to set health rules, have largely been eased.

Roads and businesses in the capital New Delhi, where several politicians including the state health minister have tested positive for the virus, were largely open on Friday.