A decade of peace 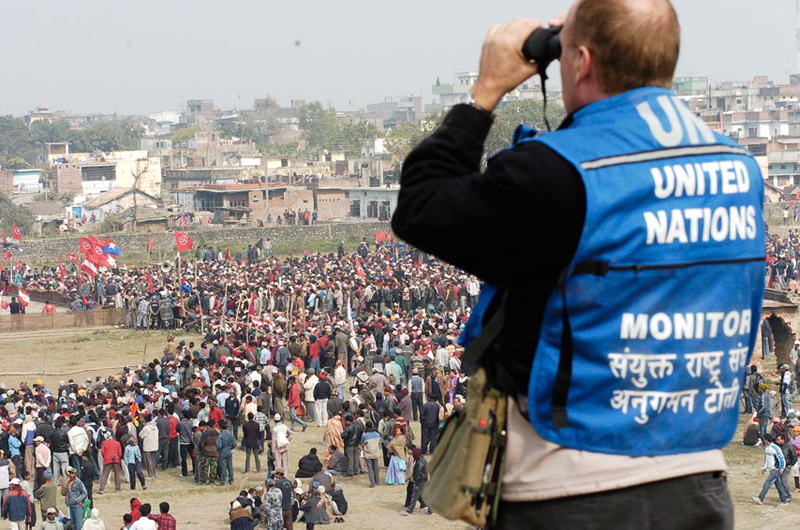 Building peace requires inclusion, justice and making strides to Nepal’s development goals
Today Nepal marks ten years following the Comprehensive Peace Accord that brought an end to its decade-long conflict. Steadily over the last ten years, Nepal has made strides toward maintaining peace, a feat that the UN applauds. This commendation is not only for the nation’s leaders, but also for each and every Nepali who has participated in a decade of sustainable peace since 2006.

Nepal has shown the world it can move past conflict, build peace, and shine a light, however faint, on the root causes of its war while attempting to steer the country towards a more prosperous future. As such, on this laudable occasion, the UN would like to extend its congratulations to the people of Nepal.

The aftermath of war can be equally devastating and arresting the development of a nation, yet Nepal seized the opportunity to set on the path towards sustainable peace.

With an end of hostilities, Nepal succeeded in turning armed conflict into political processes and dialogue. Following the Peace Accord, the country reintegrated former combatants into the Nepal Army, held two inclusive elections, and began drafting policies that would envelop the key principles of its peace agreement.

Last year, Nepal promulgated its long awaited constitution, replacing an interim one, that sewed together a tentative post-conflict vision, a secular federal republic. It is within this 2015 constitution that Nepal enacts one of its boldest and most ambitious public contracts.

While Nepal took necessary steps in the right direction demonstrating a national refusal to slide back into war, under the surface of the last peaceful decade continue to lie the root causes of the initial conflict that must be addressed among which are inequality, ethnic and social exclusion and access to justice.

Transitional justice is a full component of peacebuilding. Uncovering the actual events and wrongdoings in the war and making amends for the crimes and injustices is essential and indispensable in rebuilding trust lost and helping victims heal the wounds of conflict.

Nepal has moved forward on its transitional justice reform. The Supreme Court set out legal parameters for the country to address justice and accountability gaps. The implementation of these parameters and compliance with international human rights instruments are the crucial and indispensable steps in building a real and lasting peace and would also signal Nepal’s commitment to the rule of law without which no sustainable development can be achieved.

Peace is not just the absence of war, but is found in the continuous development of a nation.

Sustaining peace depends on the commitment of leaders, stakeholders and the general public to actively participate. People deserve to live with dignity, with opportunities. When there is a system in place to connect people to economic prosperity, access to education and healthcare, and gender, ethnic and social inclusion, conflict is less likely.

In 2015 the world adopted the Sustainable Development Goals. Underpinning this interlinked set of 17 goals is peacebuilding. It is the cornerstone of a developing society; one that addresses inequality and injustice while promoting an end to poverty, fair and transparent governance, and a commitment to stemming the devastating effects of climate change, among other targets.

Setting the foundation is commendable, but it’s the action taken next that will solidify the ambitions. In today’s peaceful Nepal, there is an ongoing inequality, ethnic, gender and social exclusion that must be addressed. Even and inclusive access to the development gains Nepal has made and continues to make is crucial to solidify the steps made towards a prosperous Nepal.

The UN plays a role in protecting the most vulnerable, encouraging an effective, inclusive and fair transition and has remained a dedicated partner to Nepal through the end of conflict, its decade of peace and into the future. It is as such that the UN will stand with Nepal as it travels the road towards these development goals.

The author is UN Resident Coordinator in Nepal

Commentary: A Decade Of Peace Process: What's the achievement?

KATHMANDU, Nov 23: It has been a decade since Nepal entered into the formal peace process with the signing of... Read More...