Fascinated by youth's demonstration, some people provide free food, water to protestors on their own dime 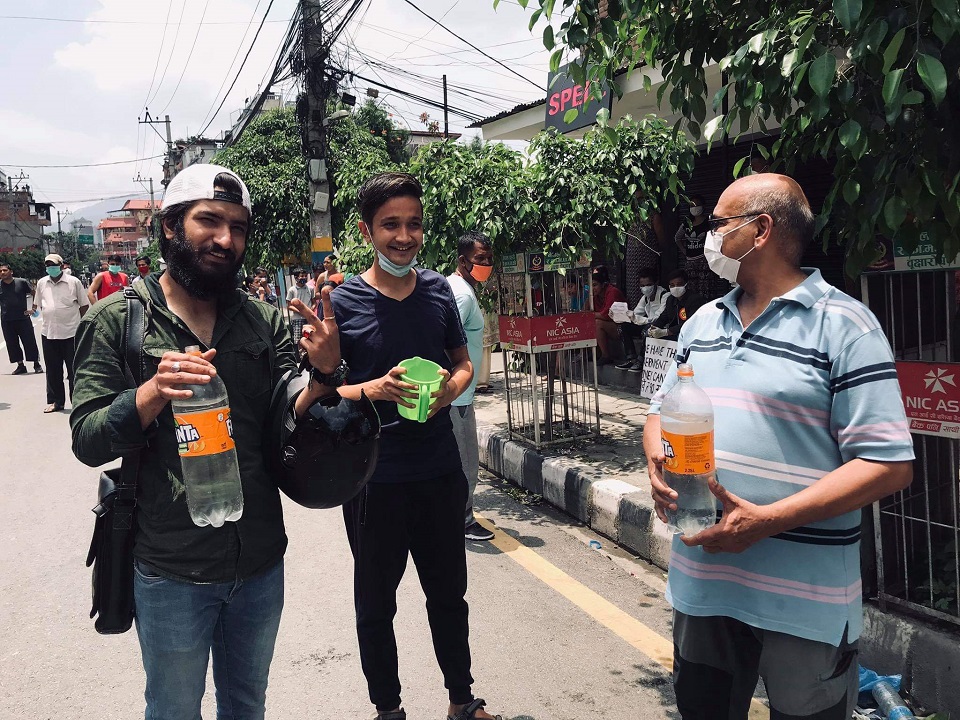 A local from Naxal providing water to protestors.

KATHMANDU, June 14: While the main streets across Maitighar Mandala observed hundreds of protestors demonstrating against the government's dreary response to the COVID-19 pandemic, Samarpan Jung Karki sat inside a roadside cafe, just beside the same street, waiting for the protest to end. Starting from forenoon, 28-year-old Karki, accompanied by his friend Madhav Thapa were busy arranging packets of food they had ordered to feed the protesters - for free. They weren't there to protest but to help the protestors with free food.

"I sense fortitude and determination in these people. The way they're protesting shows how they're resolute to ask for a change from the government.  This encouraged me to help these people in any way I could," Karki said. 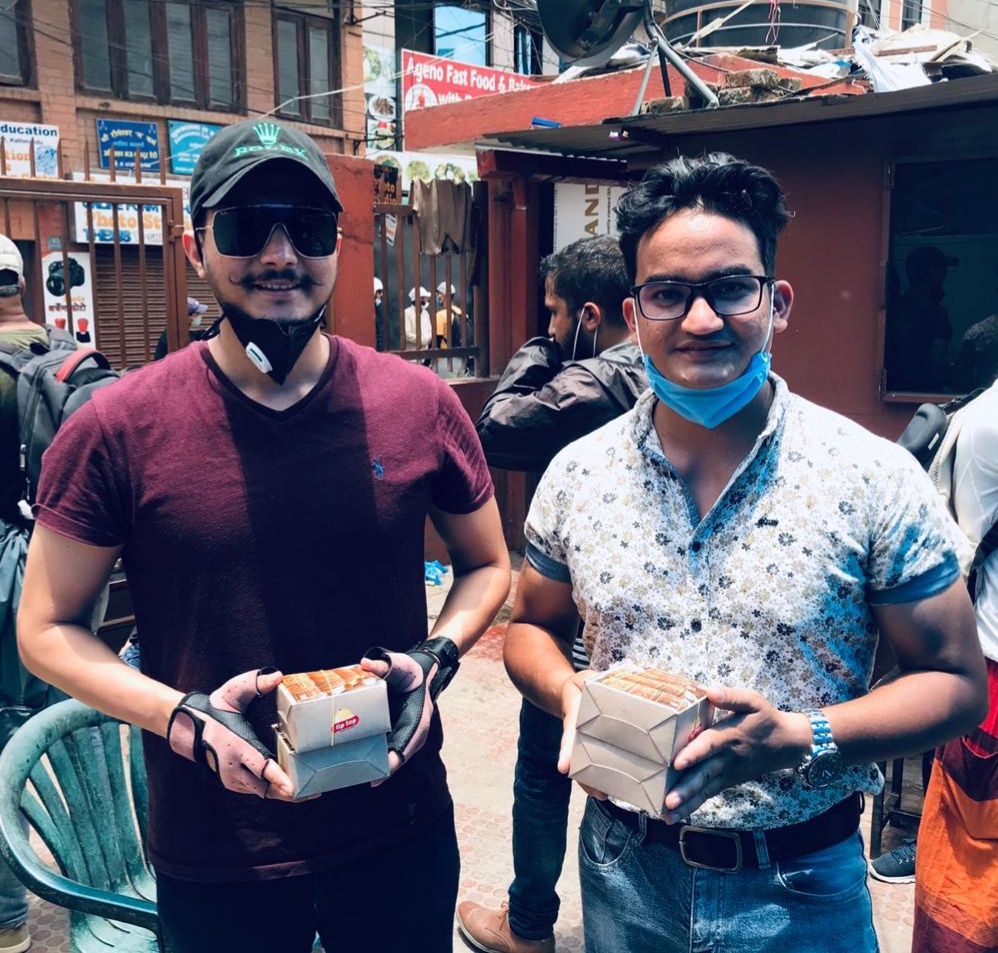 Samarpan Jung Karari and Madhav Thapa pose for a picture while distributing food to protestors.

Unlike the previous two protests observed in Naxal and other parts of the valley on Tuesday and Thursday, the protest held on Saturday at Maitighar Mandala was nonviolent and non-aggressive. The youth-led protest, initiated on social media, first took place on Tuesday spreading across several parts of the nation since then. The previous protests were vehement that witnessed clashes between protesters and policemen. This time, however, the circumstances were different.

Most of the protesters could be seen with placards lettering positive statements rather than aggressive and sarcastic ones. A lot of them were also holding flowers and national flags.

Predicting the chaos the COVID-19 pandemic was likely to create, Karki who worked as a pilot in the United States came back to Nepal a few months ago. "I came back to Nepal as the pandemic was on the verge of creating an aura of fear and distress in the US." However, Karki mentioned that the handling of this situation by the Nepali government was gloomier for him to look at. "Everything back in the states was systematic. Here however, things are muddled and the government hasn't taken sturdy measures to help the citizens. It is a sad thing to realize, " Karki told Republica Online, adding, "I see myself in these youths that have taken to the streets to protest against the passiveness of the government. The willpower they carry to change this is appreciable".

He has been providing food to the protestors since the very beginning of this protest and the money he uses in buying the food is all from his personal savings. His friend Thapa has also been helping him in this initiative. "These people have spared their energy and effort to mark our common voices. We just wanted to help them however we could manage", Thapa said. By now, he has spent thousands of rupees from his own savings.

On Thursday as well, a few locals from Naxal had set up water stalls at different spots to provide water to thirsty protestors. Keshav Giri and his wife Shova Giri were amongst the few individuals who provided water to the thirsty protestors. When one of the protestors felt unconscious, the Giris who own a grocery store in Naxal gave her shelter until she was fine.

Talking to Republica Online on Thursday, 42-year-old Keshav said, "I am amazed to see that most of these protesters are youths. This reminds me of the People’s Movement II of 2006."

The couple seemed very happy to help the people even with their little efforts. Keshav's Wife Shova even enjoyed having conversations with the protestors about their initiative behind the protest. "The agenda for their protest seems genuine, however, they could have avoided this during critical times like these," she expressed her view earlier this Thursday. Along with setting water stalls, the couple also gave around 100 bottles of water to the protestors from their store.

Although the situation between the protesters and policemen on the field was aggressive during previous protests, the protest on Saturday was different. However, 13 people including some foreign nationals were arrested from the spot. Learning from the previous failures in following safety measures, most of the protestors on Saturday were very careful in adhering to sanitation measures.

The demonstration too was carried out in a peaceful manner where the protestors lined up on the streets maintaining social distance. A couple of them were seen sharing hand sanitizers with other protesters. A few people even offered flowers to the police after the protest to thank them for being kind and not using force this time.

Having looked at the previous two protests, Karki seemed happy to see a restful protest this time and he hopes the protest leads to a better conclusion. "Afterall things work better when solved amicably than with hostility. I hope the government hears our calls so that the people don’t have to hit the streets time and again."

Permission granted to cut around 7,000 trees to widen Mugling-Pokhara road

DAMAULI, Oct 22: Around 7,000 trees are to be cut during the widening of the Mugling-Pokhara road section of the... Read More...

PM assures of relief packages for survivors of floods, landslides

MAHENDRANAGAR, Oct 22: Prime Minister Sher Bahadur Deuba has announced that the government will come up with relief packages for... Read More...

DOTI, Oct 22: Electricity and communication services which had been disrupted for the past six days due to floods and... Read More...