A decade on, legacy of Maoist war stalks Nepal 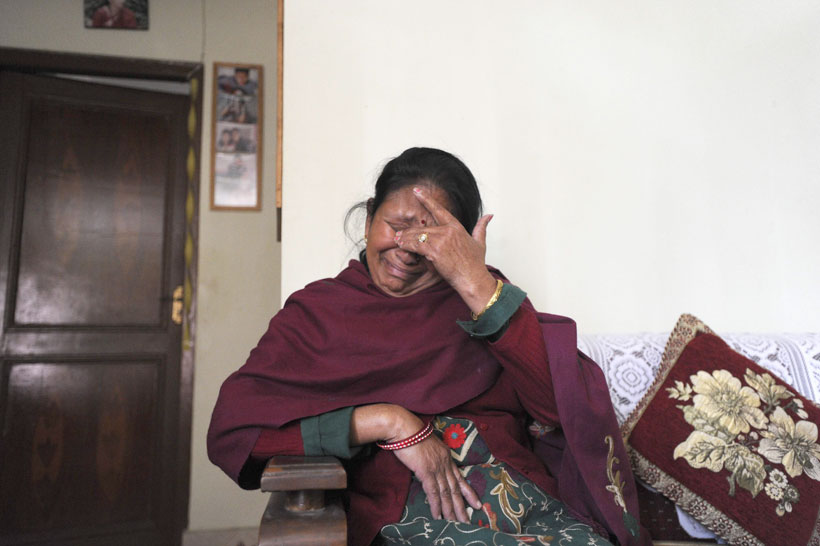 In this photograph taken on November 15, 2016, Sabitri Chilwal, widow of victim Ganesh Chilwal who was shot dead by alleged Maoists cadres in 2004 during Nepal's decade-long war, weeps as she speaks to AFP in an interview in Kathmandu

KATHMANDU, Nov 19:  Sabitri Chilwal's eyes mist over as she remembers the day 12 years ago when her husband was shot in his office and left to die in a pool of blood at the peak of Nepal's Maoist insurgency.

Sunday marks a decade since the Maoists signed a peace deal to end a 10-year civil war that claimed more than 16,000 lives, laying down their arms and entering politics with a promise to bring change to the deeply feudal country.

The peace agreement hastened the end of a 240-year-old Hindu monarchy and transformed Nepal into a secular republic, and with it came hope that a new constitution would heal the deep fissures in the impoverished Himalayan nation.

But Nepal has since shuffled through nine governments, mostly brittle coalitions, as political infighting has thwarted reconciliation and left victims of the bloody insurgency doubtful that they will ever see justice.

Chilwal is among over 60,000 people who have filed complaints with the two commissions set up in 2014 to investigate the murders, rapes and forced disappearances perpetrated by both sides during the conflict.

The commissions have been hamstrung by a lack of funding but the slow progress is also blamed on reluctance among some quarters to find the perpetrators, many of whom occupy positions in the military and political parties.

"It has been ten years since the war ended and yet nothing has happened. My husband's killers are walking free," said Chilwal.

"They themselves are in the government now. I don't know how anything will happen," she added.

The Maoists swept to victory in the first national elections held after the 2006 peace deal but soon fell out of favour as former cadres accused rebel leaders of adopting lavish lifestyles and betraying their sacrifices.

Nepal's fractious coalition politics however meant that Maoist chief Pushpa Kamal Dahal, better known by his nom de guerre Prachanda or "the fierce one", secured a second chance at being prime minister in August after winning the support of other parties.

Prachanda has since promised to resolve disagreements over the new constitution, which was finally adopted in September last year -- rushed through parliament four months after a massive earthquake devastated the country and claimed nearly 9,000 lives.

But the passing of the long-awaited charter -- meant to usher in a new era of peace and stability for war-torn Nepal -- was marred by deadly clashes between police and ethnic minority protesters, who say the constitution has left them marginalised.

"If we assess the peace deal after a decade we find that it limited itself to ending the conflict but failed on restructuring (the country) to establish political stability through equality and progressive agendas," said Kathmandu-based political commentator CK Lal.

"It gets a pass mark, but bigger issues remain to be addressed," Lal added.

- 'Diluted, lost, ignored' -
The first sign of trouble emerged when members of the historically sidelined Madhesi minority, who live in the densely-populated Terai plains bordering India, complained that new internal borders laid out in the draft charter would leave them under-represented at the ballot box and in the national parliament.

The Madhesis -- who make up a significant proportion of the Terai population -- have long complained of discrimination, with many encountering prejudice due to their close cultural, linguistic and family ties to Indians living across the border.

Their demands went unheard and days after the constitution was adopted, protesters kicked off a months-long border blockade that led to a crippling shortage of goods across Nepal.

"If you look at the early documents of the Maoists and the peace process there is an agreement on socio-economic transformation on both sides. But it has been hugely diluted, lost or ignored," said Akhilesh Upadhyay, editor of The Kathmandu Post.

Dahal has promised amendments to the constitution by the end of November, hoping to stave off another showdown with Madhesi demonstrators who are threatening a fresh round of protests if their demands are not met.

Shopkeeper Saroj Mishra, 35, was among thousands of Madhesis who protested against the charter last year.

Beaten by police during the demonstrations, Mishra said he was fed up of waiting for the government to listen to citizens like him.

"The government seems to think Nepal is (only) Kathmandu," he said.

"So many years have passed after the peace deal, but here we are still forced to fight."