KATHMANDU, May 30: A Secretariat meeting of the ruling Nepal Communist Party (NCP) is currently underway at the Prime Minister's Official Residence in Baluwatar.

The meeting is focused on endorsing the US Millennium Challenge Corporation (MCC) agreement through the federal parliament, according to Surya Thapa, the prime minister's press advisor.

In the fiscal year 2020/21 budget unveiled on Friday, the government included the projects to be developed under the 500 million MCC grant although it has yet to be ratified by the federal parliament. 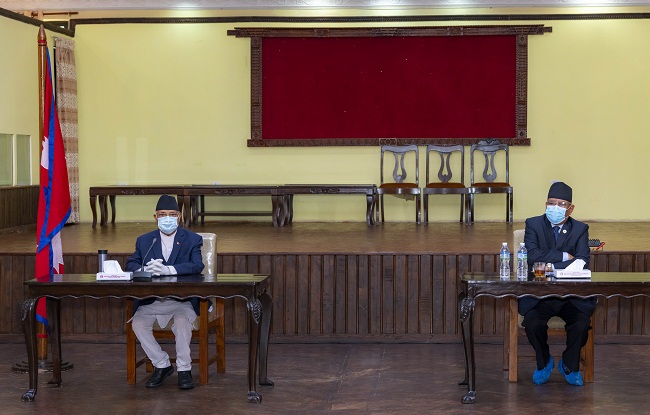 Those NCP leaders who are opposing the MCC Compact have primarily objected to its three provisions. The first is that the Compact will prevail over Nepal's existing laws in cases of conflicts. The second one is that Nepal has to take the Indian government's consent while developing transmission lines within the Nepali territory. The third one is that Nepal's Auditor General will not be able to audit the accounts of the projects under MCC and only US audit firms are allowed to do so. Likewise, NCP leaders Khanal and Rawal have been insisting for a long time that the MCC should not be ratified through the parliament as it is since this is an integral part of the Indo-Pacific Strategy pushed forward by the United States to counter China.

The meeting is discussing a report earlier submitted by an NCP taskforce to settle the MCC row.

Although NCP leader Rawal, Foreign Minister Gyawali and Finance Minister Yuba Raj Khatiwada are not NCP Secretariat members, they too have been invited to the meeting today, according to Thapa.

"Given the differences within the party over the MCC ratification through parliament, today's Secretariat meeting will try to forge a consensus among the top brass of the NCP on the same," a leader of the NCP told Republica Online.

KATHMANDU, Dec 23: Failing to forge consensus in the party's standing committee on whether to endorse the $500 million US... Read More...

Accepting this grant is Nepal’s choice but the availability of MCC funding is not open-ended: US