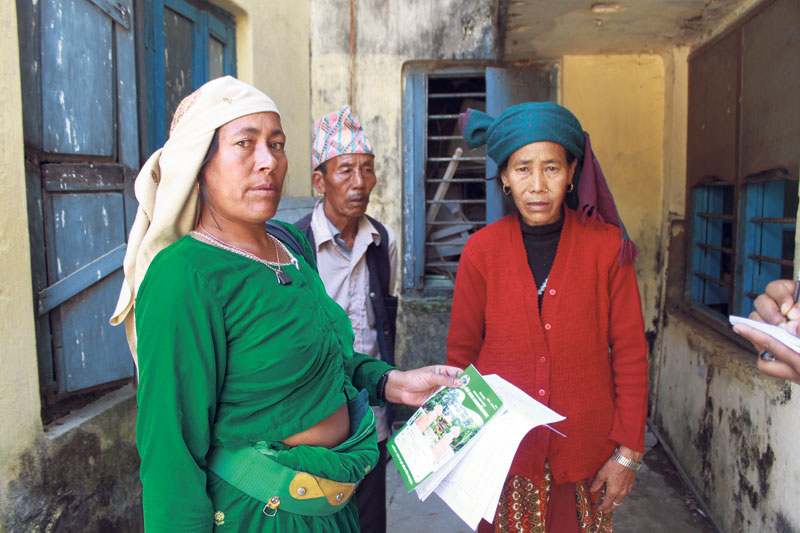 BIRATNAGAR, Nov 18: After his 18-month-old son got diagnosed with brain tumor, Shambhu Singh, a local of Kamaha village of Sunsari district did not think twice before selling off the only plot of land they had to cover the cost of treatment.

The boy underwent surgery in a well known hospital in Biratnagar two months ago. Singh paid Rs 250,000 to the hospital for the treatment. Soon after removing the tumor through operation, the child was shifted from the intensive care unit (ICU) to the general ward though his health was still critical. In the general ward, his health begun to worsen.

The boy’s condition began deteriorating and then he was taken back to the ICU again. He was getting treatment in ventilator and that meant the hospital bill was accumulating.

Even after selling off whatever they had, Singh’s family could not afford the treatment any longer and the child was finally taken out of the ventilator.

“The cost of ICU service was over Rs 10,000 per day,” said Singh’s neighbor Pramod Sharma. “Arranging enough money for such treatment was something impossible for his family. We were also helping them but that was not easy,” he added.

A woman from Kamahi bursts into tears after Neuro Hospital refused to hand her the dead body of her son without clearing bills.

When the boy’s health turned critical, the hospital referred him either to BP Koirala Institute of Health Sciences of Dharan or to Siliguri in India. The family, which had already spent more than their capacity for the treatment of the child was not in a condition to follow the hospital’s suggestion. The hospital forced the boy out of ventilator, which took further toll on the boy’s health and he soon succumbed to his illness.

After the boy’s death, the hospital used his body as bargaining chip to force the family pay the due bills. It did not get ready to hand over the body to the family unless the bills were settled. “They told the family to pay Rs 500,000 and take away the body,” said Sharma, the family’s neighbor.

For two days, the dead body remained in the hospital. On the third day, following a joint meeting of the boy’s family, representatives of political parties and the hospital, the body was finally released by the hospital without the bills being settled.

In another case, Anuj Biswash of Kusahwa, Sunsari got bed ridden due to meningitis. He was admitted to Birat Nursing Home in Biratnagar. When was recovering and few days were left for his discharge, he was handed a bill of Rs 82,000 by the hospital. The cost of medicine was equally high. Anuj’s caretaker and brother Manoj got shocked over the expenses and discussed the matter with their father over phone. The father assured them that he would arrange the amount by taking loan from friends or relatives. Worst was yet to happened as the father was trying to bail out his sons.

“The next call that I got from Manoj shattered me. He told me that Anuj had committed suicide,” said the bereaved father.

Anuj was not able to bear the pain his father was undertaking to save him. For the poor family, the amount asked by the hospital was not a small thing. “My son jumped off the hospital terrace and ended his life just because of few thousand rupees. He would not have done that if I was able to pay off the bill easily,” lamented the father.

This unfortunate family had lost its prime member two years ago in lack of treatment. Anuj’s mother had died due to an illness compounded by delayed and incomplete treatment. The incident left a deep mark in his psyche and it was also one of the reasons why Anuj was not able to take his situation lightly.

“My brother was recovering and that should have made him happy. He was getting discharged. But then, poverty killed him,” said Manoj.

The two cases are just examples of poverty killing people. Except for well-off people, it is not easy for others to get health facilities from hospitals, according to locals. They said that those who are from modest economic background are better dead than ill.
Nepali Congress leader Sujata Koirala receiving Rs five million for treatment of her breast cancer has outraged the public. Amid this outcry, the sorry state of health facilities for commoners and the lack of zeal among the leaders to improve the health sector expose their real nature, locals said.

“As long as they have easy access to better hospitals abroad for their treatment, they would never feel the need to improve things here in our own country. Who would care for the poor?” said a relative of 51-year-old Kisan Maya Rai, a heart patient. Rai is looking for free treatment in government hospital. However, she has little hopes from Koshi Zonal Hospital where she, along with her relatives, was spotted recently.

LAHAN, March 11: On January 19, 2007, the East-West Highway was blocked in Lahan to pressurize the government to release Upendra... Read More...