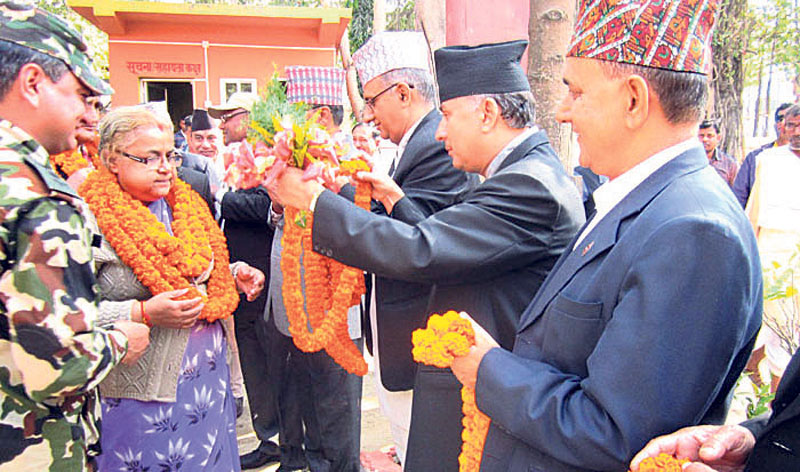 Chief Justice Sushila Karki being welcomed at Rajbiraj of Saptari district when she arrived there to inspect the Rajbiraj Bench of Janakpur High Court on Friday. (Jitendra Kumaar Jha/ Republica)

RAJBIRAJ, Nov 19: Chief Justice Sushila Karki has said that although she is in favor of proportional inclusive system, she will not appoint an unqualified candidate as justice as such a move would be inappropriate.

She stressed the need for producing capable individuals saying that promoting an unqualified individual in the judiciary or any other sector just on the basis of proportional inclusive system would invite negative consequences.

"On the one hand a person demands proportional inclusiveness and on the other, the same person doesn't allow the female members of his family to lift the veil. This tendency still exists in our society, which is wrong," Karki told journalists at Rajbiraj Airport on Friday. "Everyone should create an environment favorable for daughters and daughters-in-law so that they can become capable citizens. Only then can proportional inclusiveness be felt."

She sought support from all sides in her efforts to end irregularities in the judicial sector.

Asked about the trend of nominating candidates for justices based on political affiliations, Karki argued that an individual can have some political conviction but he/she must work independently after assuming judicial responsibility.

CHITWAN, Dec 13: Chief Justice Sushila Karki has directed the judges to provide the justice being clever to maintain the... Read More...

Infographics: Being HIV-positive doesn't mean you have aids

Being HIV-positive doesn't mean you have aids ... Read More...

Concerns over safety of public money, data after F1Soft's intrusion in news website
17 hours ago

Australian PM Morrison advises foreign students to leave his country, thousands of Nepali students likely to be affected
2 hours ago

PM should immediately sack his IT consultant: NC leader Koirala
10 hours ago

Cold remedies that work
12 hours ago