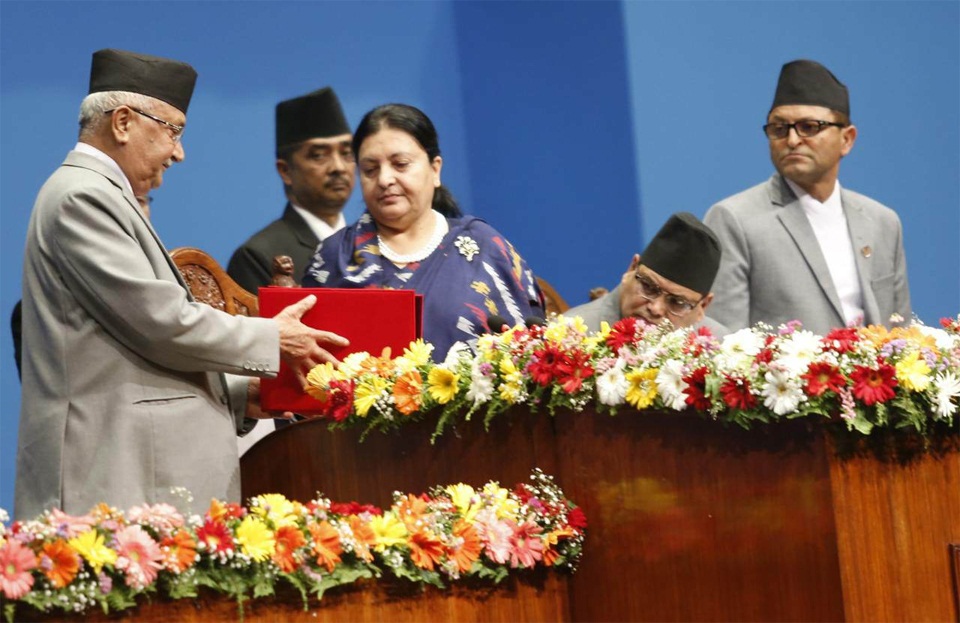 KATHMANDU, May 15: As President Bidya Devi Bhandari is unveiling the government's policies and programs for the upcoming fiscal year 2020/21 later today, many are waiting curiously to see how the head of state presents herself in parliament this time.

President Bhandari had courted a serious controversy after she used the term 'mero sarkar' (my government) instead of the Nepal government while presenting the government’s policies and programs last year as this was the first time any head of state had used that phrase after the country embraced the republican system in 2008.

Critics said that the use of the phrase 'mero sarkar' by the president of Republic Nepal was akin to its usage by former monarchs in parliament and that this indicated the emergence of new royals after the ousting of the old ones.

President Bhandari courted further controversy after Prime Minister K P Oli raised some issues about her seating arrangement in parliament. President Bhandari was seated at the same level as the then Speaker Krishna Bahadur Mahara in the rostrum.

President Bhandari’s lavish motorcade from Sheetal Niwas to the Parliament Building in New Baneshwar had equally drawn public criticism. Critics say that this gave an impression that the monarchy is still alive in the country, although the 240-year old institution of monarchy was abolished to establish republicanism in the country.

Sources said there will be no extra formalities and lavish motorcades this year as compared to the previous year in view of the threats of coronavirus (COVID-19). Foreign diplomats haven’t been invited to this year’s policies and programs unveiling ceremony.

President Bhanadari is scheduled to unveil the government's Policies and Programs before the joint session of the House of Representatives and National Assembly at 4 pm. All lawmakers of the federal parliament have been asked to take their seats before 3:45 pm, according to the Parliament Secretariat.

A team of Nepal Army personnel had inspected the parliament building to see the preparations made on Friday morning. A rehearsal of the program was also done earlier.

KATHMANDU, April 21: While concluding that the two separate ordinances promulgated by the government on Monday go against the spirit... Read More...