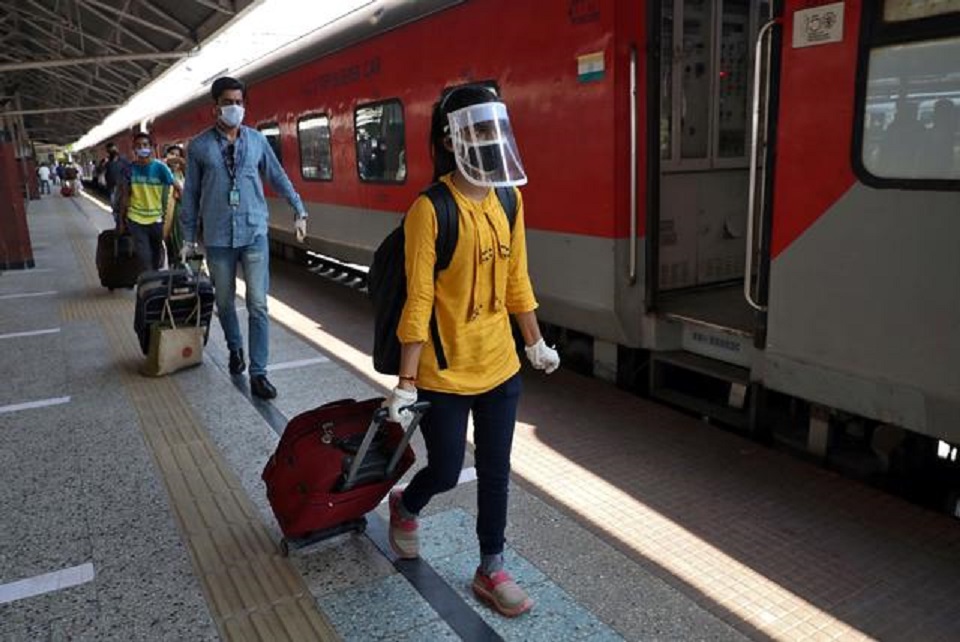 People carrying their belongings queue outside a railway station to board trains that will take them to their home states after India announced a limited reopening of its giant rail network following a nearly seven-week lockdown to slow the spreading of the coronavirus disease (COVID-19), in New Delhi, India, May 12, 2020. REUTERS/Adnan Abidi

NEW DELHI, May 12: Tens of thousands of people have booked out seats on Indian trains that are due to restart on Tuesday after a near seven-week lockdown, raising concerns of spreading the coronavirus in the absence of social distancing.

Prime Minister Narendra Modi’s government is starting to pull back from one of the world’s tightest lockdowns of 1.3 billion people that has left millions out of work and stranded in cities far from home while infections keep rising.

State-run railways restarted services from New Delhi to 12 cities including Mumbai, Chennai and Bengaluru, and within an hour of opening, all seats were booked out online, a spokesman said.

“The trains will run full. Reservations have been made for 54,000 passengers,” said another official.

Tuesday will only be a small opening for the notoriously overcrowded rail system that in normal times moves more than 20 million people a day.

Passengers will have to wear masks throughout the journey and will be screened before they board the train, the railway ministry said. They also have to sign up for a government-backed contact tracing app on their phones, the ministry said.

The move comes as India’s coronavirus infections reached 70,756, adding 3,604 over the previous day. At the current rate, India is set to surpass the number of infections in China in less than a week. China’s case toll now stands at 82,918.

India’s numbers are still small compared to those of the United States, United Kingdom and Italy, but many state leaders are wary of opening up rail, road and air networks for fear of an exponential rise in infections that would overwhelm the limited medical facilities.

During a video conference with Modi to decide the way out of the lockdown that has battered the economy, the chief minister of eastern Bihar state, Nitish Kumar, said restarting rail services was a “mistake”.

His state was already seeing a surge in infections as migrant workers from India’s big cities such as Mumbai and Delhi reached home, he told the meeting, according to a state official.

The chief minister of the southern state of Telangana, K Chandrasekhar Rao, said restarting trains from Delhi, one of the coronavirus hotspots, was risky.

“It will not be possible to conduct tests on everyone. It is also difficult to put all those who travelled by train under quarantine,” he said.

But pressure has been building on Modi to ease restrictions from political leaders, businesses and people whose livelihoods have been destroyed by the shutdown.

Modi is due to address the nation later in the day.