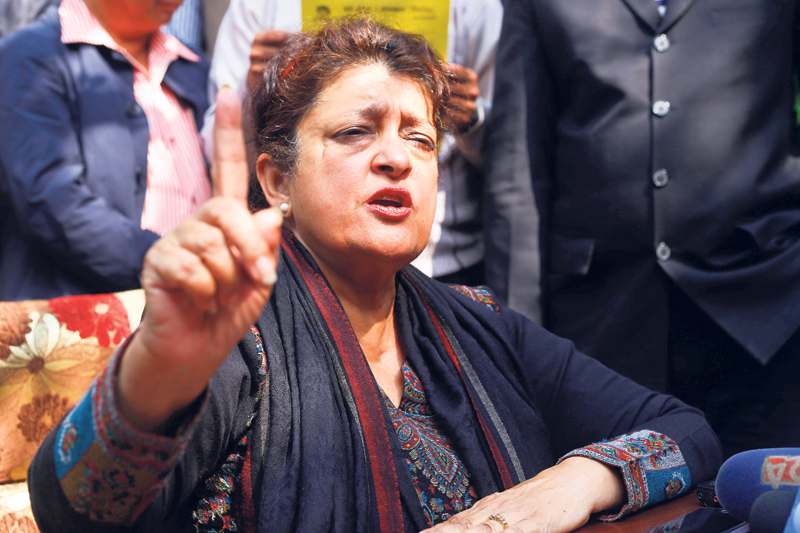 Social media has been alight the last few days with outrage and indignation over the government’s decision to pay Sujata Koirala a ‘discounted’ amount of five million rupees for her cancer treatment abroad.

In a country where people can barely afford to meet health care costs, and where a venerated doctor has to repeatedly put his life on the line to make health services accessible and affordable for the public, this decision, along with all the subterfuge surrounding it was bound to raise people’s pulses.

The anger at this decision is understandable, but what isn’t is the repeated disparaging attacks on a person’s family or private aspects of their lives, especially someone who has been diagnosed with cancer. This ailment isn’t something we would wish on our worst enemy and, therefore, our anger should only be directed at her decision to solicit money because this type of ‘personal abuse’ is not only in extremely bad taste but it also undermines the argument against the system that allows selective acts of charity like this to go unchallenged.

I’m not defending Koirala by any means – she is as repugnant as they come and that is saying a lot, when you consider the assortment of odious characters within the Nepali Congress. The problem is not the individual – it is the system that is designed in order to let a select few take advantage of it. What makes her case and also that of Dr Ram Baran Yadav’s, particularly galling is the fact that both these people aren’t exactly impoverished – not by any stretch of anyone’s imagination.

It’s not only the high and mighty that we have been compelled to sponsor because the list of privileged beneficiaries also includes all manner of assorted sideshows whose contribution to the national cause is questionable at best. They spend the best part of their lives ripping the public off and we get no respite from them even when they’re old. Apart from a few decent folks, everyone’s comfortably settled into this gravy train.

Why else would our usually loquacious politicians be so quiet? The silence – including of our current ‘son of the soil’ KP Oli, who usually is never short of a sound bite whether in government or in opposition – across party lines is deafening because these are people who have either already benefited from or hope, in the future, to benefit from state largesse. The various student unions that otherwise would be tearing up the streets with their faux patriotism and symbolic acts of vandalism are keeping mum because their masters have been mooching off the same system. At least, to their credit, they display an understanding of the concept of irony.

In the midst of all this, we have keyboard warriors and netizens getting all worked up and venting their anger on social media. This, of course, is all too predictable but what really strains incredulity is that some of them actually believe their indignation or ‘suggestions’, liking and sharing posts actually make a difference. Some of us are still so naive that we believe social media can somehow perform ‘checks and balances’ against our politicians and their decisions. The truth is we have simply ceased to matter anymore to our netas and will continue to be until the next elections. Never mind social media, in Nepal, even the mainstream media has lost its potency a long time ago vis-à-vis its power to influence or bring about change in our system not for lack of gumption but due to our elected lot having transcended the shame barrier – driven on by public impotence.

This armchair activism is all we can muster these days but I doubt that even good old-fashioned political activism in the form of protests would do the trick either. Aside from the fact that it is now the preserve of unemployed ‘masu bhat’ goons, protests don’t really challenge the establishment anymore. The repeated betrayals of Dr Govinda KC and the failure to bring Lokman to book serve as almost daily reminders to us all.

If we really want to put an end to this ‘loot-tantra’ then we collectively need to change the way we are governed and put the only thing that matters, our votes, to good use.

Perhaps, along with the property details of our candidates we need to insist on their medical reports when they come around looking for votes.

For the moment, it just seems like the state exchequer is burdened with one issue after another. In a couple of days, you and I will soon be saddled with the results of the next wave of political hustling. As I write this, parliament is deciding to increase the pay and perks of all lawmakers by eye watering amounts. Apparently, life is really tough when you’re sitting around doing nothing. The gravy train is up and running again.