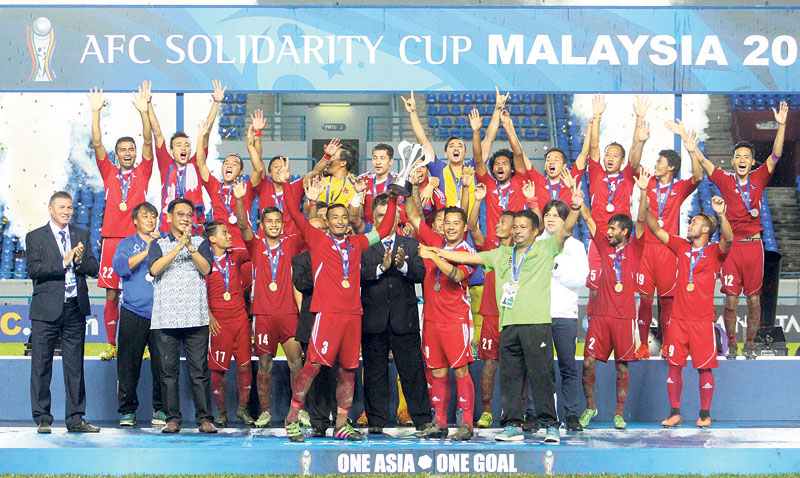 Members of the Nepali national football team pose for a group photo with their winner’s trophy of the AFC Solidarity Cup. (Photo Courtesy: ANFA)

KATHMANDU, Nov 15: Nepal has won the first edition of the AFC Solidarity Cup beating Macau 1-0 in the final held in Kuching, Malaysia on Tuesday.

Sujal Shrestha scored the only goal of the match in the 29th minute which turned to be the decisive goal. The win over Macau also gifted Nepal its first ever Asian football title in its history.

Sujal scored with a header capitalizing on Bharat Khawas’ cross from the right wing. Bharat came with great effort and intensity beating a Macau defender before setting the goal for Sujal.

The win also extended Nepal’s unbeaten run to eight matches as it beat Macau for the fourth occasion out of sixth meetings between the two sides.

Goal scorer Sujal dedicated the winning goal to his mother and aunt. “I am right now out of the world. I want to dedicate my goal to my mom and aunt,” said Sujal.

He also said that the Nepali team is looking forward to the upcoming SAFF championship. “This is just the beginning. Now we have to set our sight on the SAFF Championship,” said Sujal.

This is also the third title of Nepali football team this year after winning the titles of Bangabandhu Gold Cup and men’s football during South Asian Games (SAG) earlier this year. However, Bangabandhu (Bangladesh) wasn’t recognized as an official tournament and SAG (India) sees participation of U-23 teams.

Nepal started the game brightly at the waterlogged pitch of the Sarawak Stadium. With downpour just before the kick-off, Nepal still managed to start the match with exchange of good passes and attacking moves.

Nepal failed to take early lead when Bharat Khawas broke Macau’s defense line with his quick sprint from the right wing. He failed to achieve the target as his low shot went off the post.

Anil Gurung (L) and Biraj Maharjan (R) pose for a photo with head coach Gyotoku Koji after the match.

In the second minute of the second half, Bikram Lama missed a good chance to extend Nepal’s lead, when the midfielder failed to put the free header into the net. It was Anjan Bista’s turn to miss yet another chance in the 52nd minute after he ended up hitting a feeble shot straight into Macau’s goalkeeper’s hands.

Nepal continued to pile up pressure on Macau in the match making attacking moves and build-ups despite slippery pitch preventing both sides to make accurate passes. However, Nepal failed to produce another goal with Bimal Gharti Magar particularly attempting many weaker close-range shots.

Nepal’s players celebrate after Sujal Shrestha (15) scored the winning goal against Macau during the AFC Solidarity Cup final in Kunching, Malaysia on Tuesday.