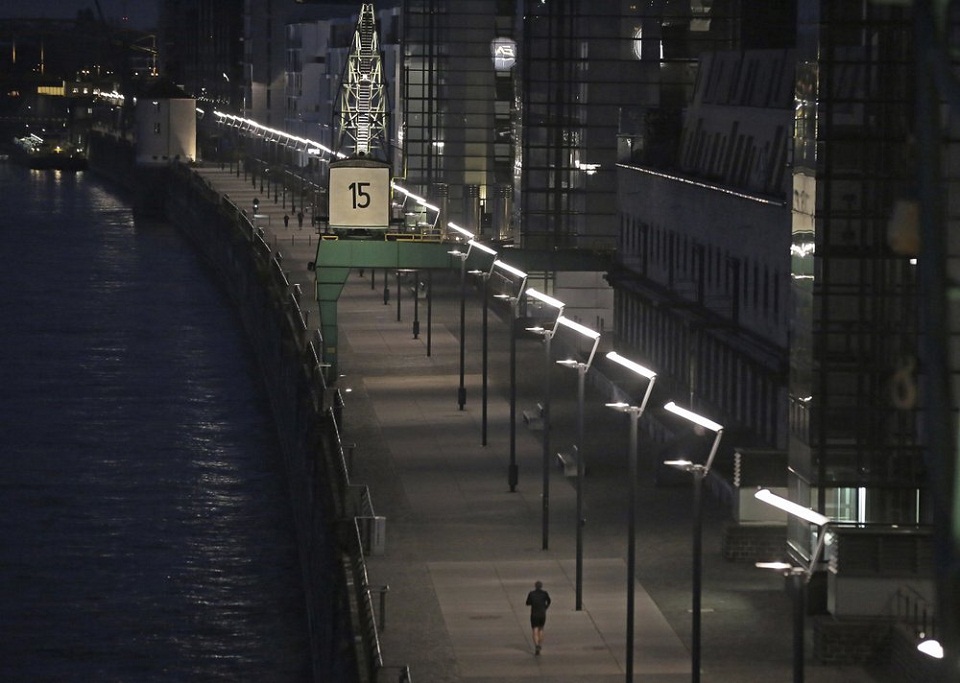 A man jogs in the morning in the Rheinauhafen in Cologne, North Rhine-Westphalia Wednesday, April 8, 2020. To contain the coronavirus, NRW has banned all accumulations of three or more people in public. (Oliver Berg/dpa via AP)

NEW YORK, April 8: As New York City faced one of its darkest days with the death toll from the coronavirus surging past 4,000 — more than the number killed on 9/11 — the Chinese city where the global pandemic began lifted its final restrictions on movement Wednesday as deaths there plummeted.

Despite the staggering death toll in America’s largest city, authorities in New York were optimistic that the outbreak might finally be easing, as has been seen in other global hot spots such as Italy and Spain and before that, China. Health officials, however, warned people not to let their guard down.

The virus toll in New York City is now more than 1,000 deaths higher than that of the deadliest terror attack on U.S. soil, which killed 2,753 people in the city and 2,977 overall.

In an encouraging sign, the governor said hospital admissions and the number of people receiving breathing tubes are dropping. And the death toll itself is a “lagging indicator,” reflecting people who had been hospitalized before this week, he said.

But he warned that gains are dependent on people continuing to practice social distancing.

“It still depends on what we do, and what we do will affect those numbers,” he said.

In Wuhan — the Chinese city of 11 million that was the first in the world to go on lockdown — tens of thousands of people streamed out of town by plane and train alone as harsh restrictions on movement were finally lifted. Citizens waved flags and the city staged a light show with skyscrapers and bridges radiating animated images of health workers aiding patients.

Restrictions in the city where most of China’s more than 82,000 virus cases and over 3,300 deaths were reported have been gradually eased in recent weeks as the number of new cases steadily declined. The government reported no new cases Wednesday, though there have been questions about the veracity of China’s count.

“I haven’t been outside for more than 70 days,” said an emotional Tong Zhengkun, who was watching the display. Residents in his apartment complex had contracted the virus so they couldn’t go out even to buy groceries, which neighborhood workers delivered.

“Being indoors for so long drove me crazy,” he said.

In London, the 55-year-old Johnson was in stable condition and conscious at a hospital, where he was receiving oxygen but was not on a ventilator, officials said. Foreign Secretary Dominic Raab was designated to run the country in the meantime.

“I’m confident he’ll pull through because if there’s one thing I know about this prime minister, he’s a fighter,” Raab said.

Deaths in Britain reached nearly 6,200, after a one-day increase of almost 800.

In France, the number of dead climbed to more than 10,300, said Jerome Salomon, national health director.

“We are in the epidemic’s ascendant stage,” he said. “We have not yet reached the peak.”

In other European hot spots, authorities saw signs that the outbreak was turning a corner, based on slowdowns in new deaths and hospitalizations.

In Spain, new deaths Tuesday rose to 743 and infections climbed by 5,400 after five days of declines, but the increases were believed to reflect a weekend backlog. Authorities said they were confident in the downward trend.

In Italy, the hardest-hit country of all with over 17,000 deaths, authorities appealed to people ahead of Easter weekend not to lower their guard and to abide by a lockdown now in its fifth week, even as new cases dropped to a level not seen since the early weeks of the outbreak.

On Wall Stock street Tuesday, a strong rally propelled by signs that the outbreak may be leveling off evaporated after the price of crude oil suddenly fell. Stocks ended the day slightly lower. Asian markets followed mostly lower Wednesday.

Across the U.S., the death toll topped 12,900, with nearly 400,000 confirmed infections. Some of the deadliest hot spots were Detroit, New Orleans and the New York metropolitan area, which includes parts of Long Island, New Jersey and Connecticut.

In Wisconsin, after a legal battle that reached the Supreme Court, voters were asked to ignore a stay-at-home order to participate in its presidential primary.

Meanwhile, President Donald Trump threatened to freeze U.S. funding to the World Health Organization, saying the international group had “missed the call” on the pandemic.

Trump said the international group had “called it wrong” on the virus and that the organization was “very China-centric” in its approach, suggesting that the WHO had gone along with Beijing’s efforts months ago to minimize the severity of the outbreak.

The virus continued to affect global travel, and cruise ships in particular. More than half of the 217 people on a ship off Uruguay’s coast tested positive for the coronavirus. The Australian operator of the Greg Mortimer ship said no one had symptoms and it was working to disembark the crew and passengers — many from Australia, Europe and the U.S. — and arrange their return home.

Worldwide, about 1.4 million people have been confirmed infected and more than 82,000 have died, according to Johns Hopkins University. The true numbers are almost certainly much higher, because of limited testing, different rules for counting the dead and deliberate underreporting by some governments.

For most people, the virus causes mild to moderate symptoms such as fever and cough. But for some, especially older adults and the infirm, it can cause pneumonia. About 300,000 people have recovered worldwide, by Johns Hopkins’ count.

KATHMANDU, Aug 28: Nepal recorded 12 more coronavirus-related deaths in the past 24 hours, the Ministry of Health and Population... Read More...