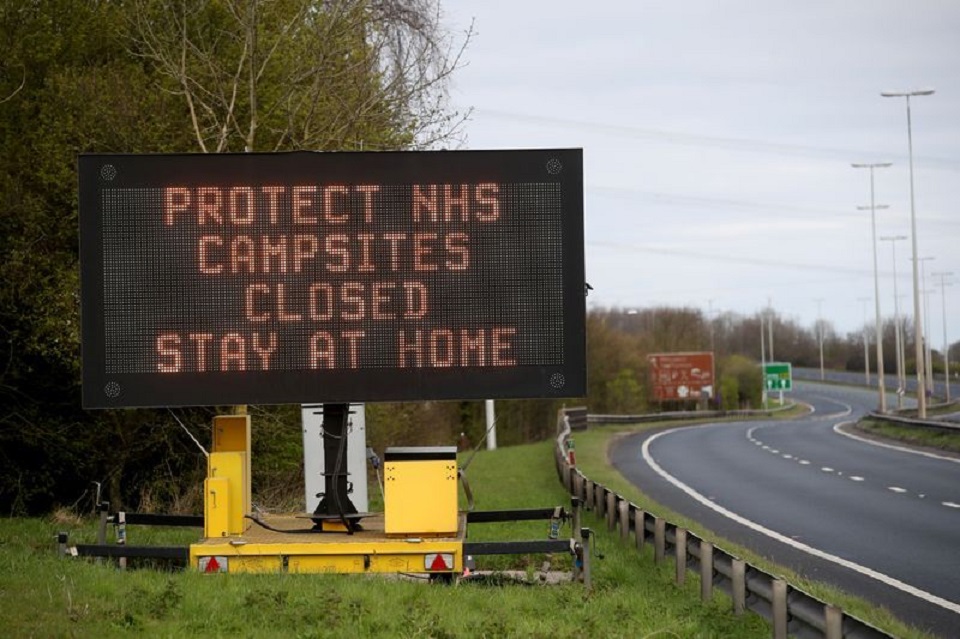 A sign displaying a message asking for people to stay home is seen next to the A55 as the spread of the coronavirus disease (COVID-19) continues, Holywell, Wales, Britain, April 4, 2020. REUTERS/Carl Recine

LONDON, April 4: Britain is unlikely to lift its stringent lockdown rules until the end of May, once the spread of the coronavirus has started to slow, a leading government adviser said on Saturday as the death toll rose to 4,313.

The government has put Britain into a widespread shutdown, closing pubs, restaurants and nearly all shops, while ordering people to stay home unless absolutely essential to venture out.

The order is designed to curb the spread of COVID-19 in the country, which has almost 42,000 confirmed cases. But some experts have started to question whether the shuttering of the economy will cost more lives in the long run.

“We want to move to a situation where at least by the end of May we’re able to substitute some less intensive measures, more based on technology and testing, for the complete lockdown we have now,” Neil Ferguson, a professor of mathematical biology at Imperial College London, told BBC Radio.

Britain’s death toll from the coronavirus rose by 20% to 4,313 by Friday afternoon with 708 new fatalties recorded, the health ministry said. That compared to a 23% rise on Thursday.

The peak of new cases could come within a week or 10 days, Ferguson said, but adherence to the strict rules will determine how quickly the rate of infections decline after that.

“It is quite finely balanced at the current time,” he said, adding that Britain could have quite high levels of infection for “weeks and weeks” if people start to socialise.

Britain initially took a restrained approach to the outbreak but Prime Minister Boris Johnson changed tack and imposed stringent social-distancing measures after Ferguson’s modelling showed a quarter of a million people in the country could die.

The response has since been hampered by a lack of ventilators and an inability to carry out mass testing to determine whether the public, and particularly health workers, have built up an immunity.

Johnson, who has been in self-isolation after testing positive for the novel coronavirus, has invited opposition party leaders to a briefing next week with medical advisers, including the new leader of the Labour Party, Keir Starmer.

“As party leaders we have a duty to work together at this moment of national emergency,” he said.

Some are questioning the long-term strategy.

A second senior government adviser, the chief pandemic modeller Graham Medley, said he feared Britain had painted itself into a corner, with no clear exit from a strategy that would damage the economic and mental well-being of many people.

Almost one million people have applied for welfare benefits in just two weeks in Britain, according to official data that shows the economy is set for a depression that could be worse than the slump in the 1930s.

“If we carry on with lockdown it buys us more time, we can get more thought put into it, but it doesn’t resolve anything - it’s a placeholder,” Medley told the Times newspaper.

“We’ve kind of painted ourselves into a corner, because then the question will be, what do we do now? In broad terms are we going to continue to harm children to protect vulnerable people, or not?”

Health Minister Matt Hancock has set a goal of 100,000 tests per day by the end of this month, a tenfold increase that industry leaders have questioned due to shortages of equipment. It is also considering immunity certificates.

Separately the government said it would free prisoners who were deemed to be low risk and were within weeks of release.

China's Wuhan, where the coronavirus emerged, begins to lift its lockdown

First governor of NRB passes away
55 minutes ago