Political parties collect up to 50 percent levy from lawmakers 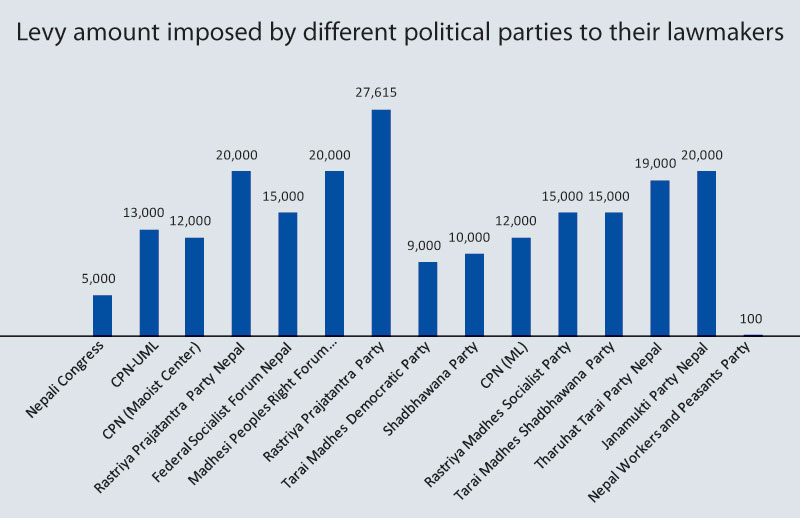 KATHMANDU, Nov 16: At a time when members of parliament are being criticized for lobbying to increase their perks and benefits, political parties are found to be collecting up to 50 percent of their monthly pay as levy.

Additionally, political parties are found to be drawing money from their parliamentarians as donations for party's general convention as well as other functions.

Although a new bill under discussion in the parliament proposes Rs 55,230 as their basic remunerations, lawmakers have been paying up to Rs 27,000 as levy to their respective parties. If a lawmaker is appointed as minister, the levy amount s/he is supposed to pay grows higher.

“I would not have been able to bear the expenses in Kathmandu if I did not have business as I pay more than Rs 27,000 as levy for the party and Rs 25,000 as donation for party's district office every month from my salary,” said Rastriya Prajatantra Party lawmaker Istiak Ahamad Khan.

RPP collects Rs 27,615 as levy from its lawmakers, which is the highest amount among all parties. This accounts to be almost 50 percent of their pay. Rastriya Prajatantra Party Nepal (RPP-N), Madhesi Peoples Right Forum Democratic (MPRF-D) and Rastriya Janamukti Party collect Rs 20,000 a month as levy from each of their lawmaker.

While Rastriya Madhes Socialist Party, Terai Madhes Shadbhawana Party Nepal are also collecting Rs 15,000 each, Tharuhat Tarai Party, Nepal has been collecting Rs 19,000 levy from of its lawmakers every month.

However, big political parties are found to be collecting relatively less amount of money from their lawmakers. The largest party in the parliament, Nepali Congress (NC) collects Rs 5,000 levy, while the second largest party, CPN-UML collects Rs 13,000 a month from its lawmakers. The levy amount collected by the CPN (Maoist Center) stands at Rs 12,000.

Interestingly, Nepal Workers and Peasants Party (NWPP) is found to be collecting the lowest amount of levy from its lawmakers. The party collects just Rs 100 a month as levy from its four lawmakers.