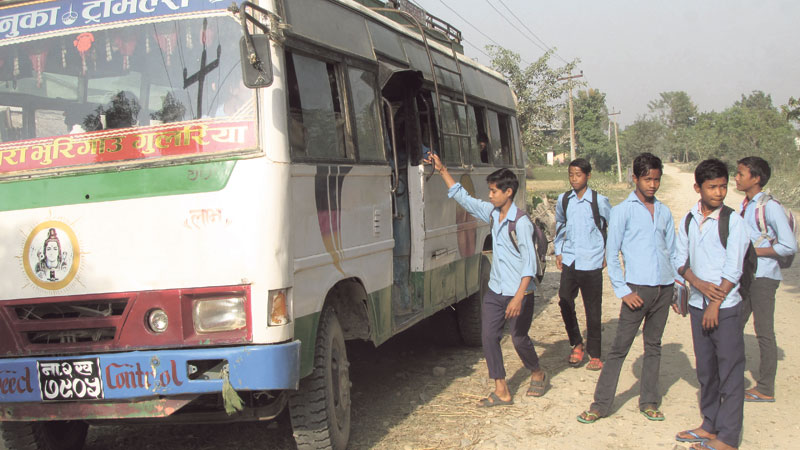 A bus carrying children of Dhodari village, Bardiya to school in this recent picture. The bus service was started after children from the village stopped going to school fearing encounters with wild animals on the way. (Nirmal Ghimire/ Republica)

BARDIYA, Nov 14: It used to take just 25 minutes for Ram Bahadur Chaudhari, 12, to reach his school but still he would not go regulary. “It was not that I was forced to stay at home for domestic work or any other reasons. I was irregular because I feared walking alone through the jungle,” he said.

“The fear has not gone from our heart. Many times, I had set off for school but returned from halfway after feeling very insecure,” Chaudari shared. He added that there were many students like him who were irregular to school because of the same reason.

Chaudari’s village, Dhodari, is near the Bardiya National Park. His neighboring village, Dalla, runs home stay services for tourists. While tourism is thriving in Dalla because of its proximity to the national park, the same has been a bane for Chaudhari’s village.
“In our village, there are few houses and we do not run home stay like them,” he said. “People are very poor here and the elephant menace is making us even poorer. Elephants kill our people, destroy our houses and crops.”

In order to ensure security of the village, the villagers have since long demanded for wire fencing their settlement. Though they have hit the streets for it, the demand still remains unaddressed. “Due to lack of responsiveness from the state authorities, our people continue to die. Most vulnerable are children and elderly,” said Dilram Tharu, a resident of the same village.

Chaudhari, says that the distance of the school would not have been problem for them, had there been no fear of elephants. But considering the ever looming fear, he felt that having a school in the village itself would help children like him to attend school on regular basis, back then.

“I used to feel that we would not have to choose between our fear and studies, if we had a school in our own village. Since the deaths, our parents were also not willing to send us to school unless they could accompany us,” he said.

He shared that he had encountered wild animals several times while passing through the jungle and said he usually used to hide behind bushes to avoid contact with them. “If you encounter an elephant and if that is in aggressive mood, that’s very dangerous.”

Responding to the concerns, a bus services for Chaudari’s village to the school, has been recently started by the Bardiya National Park and Krishnasar Transport Entrepreneur Association. And this dramatically resolved the dilemma of the parents, students and school administration. “Around 40 students use the bus service from our village,” an elated Chaudhari said.

“This has comforted us and our parents a lot. Though some still are not feeling convenient to attend studies, the bus service has helped us in continuing our studies.”
Hemant Sharma, another resident of the village expressed amusement over the bus facility. He stated that the bus transportation has relieved parents of worries and provided the children another reason for going to school. “The bus service has brought a lot of happiness to the children. It’s amusing to see the children compete for seats in the bus.”
Though the bus service has brought respite to the villagers, yet it has not effectively addressed all their concerns. Children of this village along with elders are still under threat of elephant attacks.

8th grader Laxman Tharu stated that he has lived in fear of wild animals for the last five years. “We are in constant fear of being attacked by wild animals. But you cannot stop doing your regular activities,” he said. Though he has encountered bear, tiger, elephant and rhino, he feels lucky of being not attacked by any of them.
His classmate Sunita added that fear has become a part of their lifestyle. “We have lost many of our villagers and relatives to wild animals. And given the reality, it’s not possible to not fear the beasts that live in the forests around you.”

Sunita Tharu added that elephant menace is not a new thing to the villagers. However, the killings have deeply troubled the villagers. “The way they were brutally mauled to death by the elephants has terrified all the villagers. Though the bus service has been huge relief for the students, it’s not a permanent solution to our fears.”

Shambhu Rijal, president of the Krishnasar Transportation Entrepreneurs Association of the district, also had similar assessment of the situation. “As for student’s ease, we have started this bus service. But the magnitude of the problem is bigger and the government has to take appropriate measures to address concerns of the locality effectively.”

An elephant in the Bardiya National Park in this file photo.

KATHMANDU, Dec 20: With the historic elections to the federal parliament and provincial assemblies over, the nation has now entered... Read More...

PM under pressure to probe medical procurement deal
23 hours ago 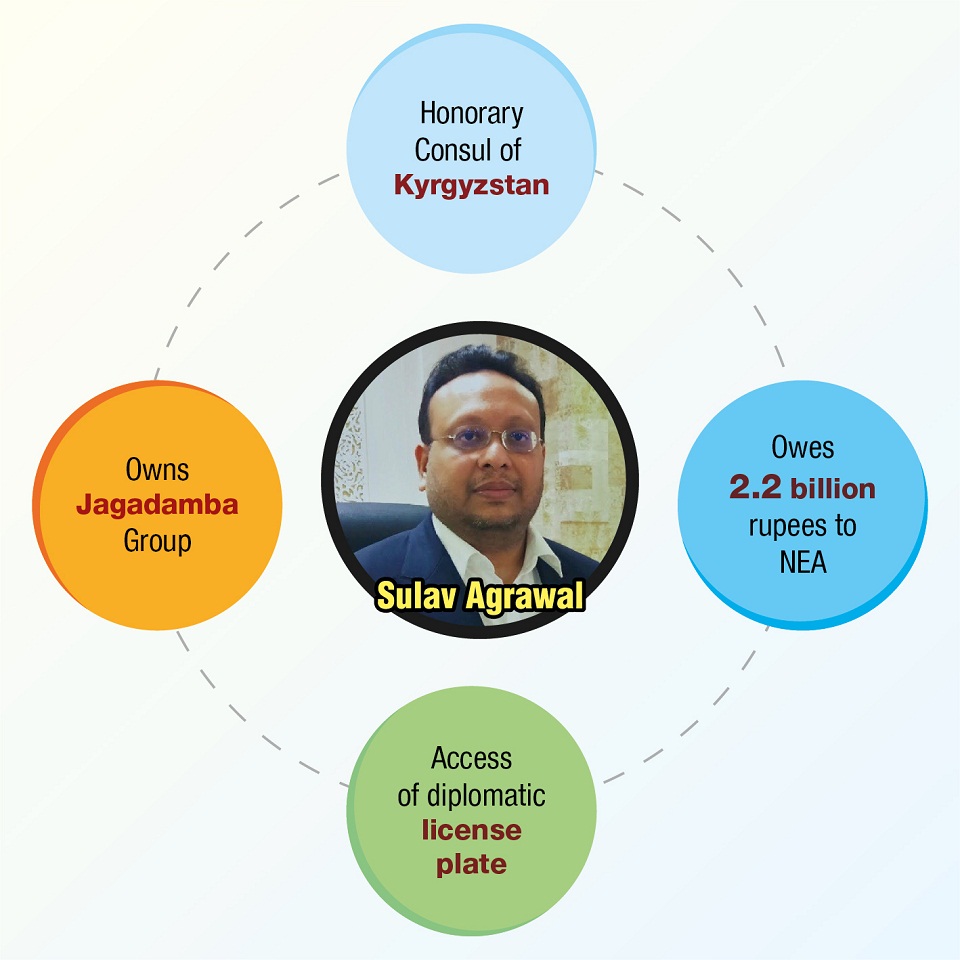