KATHMANDU, Nov 15: The government's decision to provide Rs 5 million to Nepali Congress leader Sujata Koirala for the treatment of her breast cancer has drawn criticism from all walks of life. In the light of this, we have taken a look into the health status of Nepal's major political leaders and the funds doled out from state coffers for their treatment.

KP Sharma Oli, 65, former prime minister and chairman of the CPN-UML, suffers from kidney problems. Oli, who underwent a successful kidney transplant in 2007, keeps visiting hospitals outside the country as he falls sick from time to time. The government has already provided Rs 10.26 million for his treatment.

Another UML leader, Jhlanath Nath Khanal, 66, suffers from prostate complaints. The former PM has undergone treatment at Johns Hopkins Medical Center in the US.

Former prime minister Madhav Kumar Nepal, 63, has been taking medication for high blood pressure for a while now. He also suffers from chest and urinary complaints, according to his aide, Mohan Gautam.

The government provided  former president Ram Baran Yadav Rs 6 million for cancer treatment. Yadav, who is also a former health minister, was treated at Henry Ford Hospital in the US.

Like other politicians, Prime Minister Pushpa Kamal Dahal has diabetes and blood pressure-related problems. Dahal, who is also head of the CPN (Maoist Center), takes medicines on a regular basis. “He has no major health issues. However, we have to check his blood pressure and sugar level once a week,” said Dr. Yubaraj Sharma,  private physician to Dahal. So far, he has not received any government funds for treatment.

Sixty two-year-old Dahal was briefly admitted to Janamaitri Community Hospital, Balaju in 2008 after developing a fever. “He  plays badminton for around one hour regularly to maintain his health,” said Santu Darai, a Maoist leader who works closely with the PM.

Former prime minister and Nepali Congress President Sher Bahadur Deuba doesn't have any major health problem. Deuba neither goes to hospital for regular checkups nor takes medicine, according to his aide Keshav Joshi.

And it is not just politicians. Influential individuals and bureaucrats also drain the state coffers.  The government provided Rs 8 million to then chief justice Ram Kumar Sah and Rs 10 million to Aaditya, the Google boy.

The Health Ministry's recent proposal in the cabinet to limit state fund grants  for the treatment of VIPs to Rs 1.5 million remains undecided.

The government has doled out more than Rs 71 million to nearly a dozen politicians in the name of medical expenses in the last decade or so. A report received by Republica shows that politicians, including former prime ministers, received a total of Rs 71.17 million from state coffers for medical treatment abroad, on the basis of cabinet decisions.

The Commission for Investigation of Abuse of Authority (CIAA), the constitutional anti-graft body, is not allowed to investigate the decisions of the cabinet. Moreover, individuals receiving money in this fashion do not have to submit their expense details.

Social sites like Facebook and Twitter are filled with angry messages from the public over the misuse of tax payer money by leaders who are believed to have millions stashed away in their personal bank accounts. Many are asking why the leaders have to go abroad for treatment when the country's top hospitals have VVIP medical lounges meant for them.

Dr Govinda KC, a senior doctor at Tribhuvan University Teaching Hospital, said that these leaders have been misusing resources and bleeding the state coffers.

“They should get treatment in the country just as ordinary people as long as the services are available here. They should be restricted from going abroad through new provisions in the law,” said KC, who is currently staging his 10th hunger strike demanding reforms in the medical sector. “The hospitals should be modernized and equipped with all the facilities for the tretment of everyone." 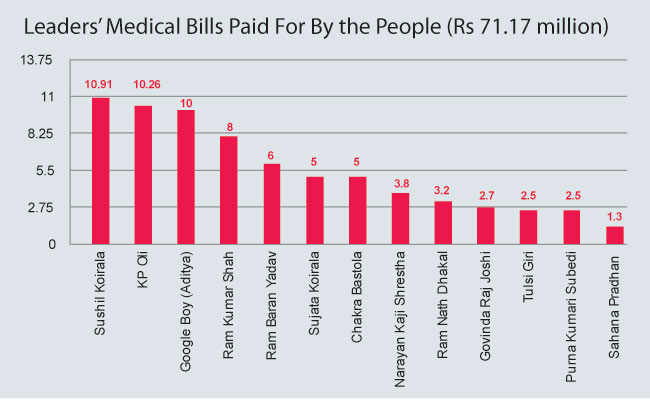 KATHMANDU, Nov 4: Manifestos and commitments that political parties have come up with for upcoming elections of House of Representatives... Read More...