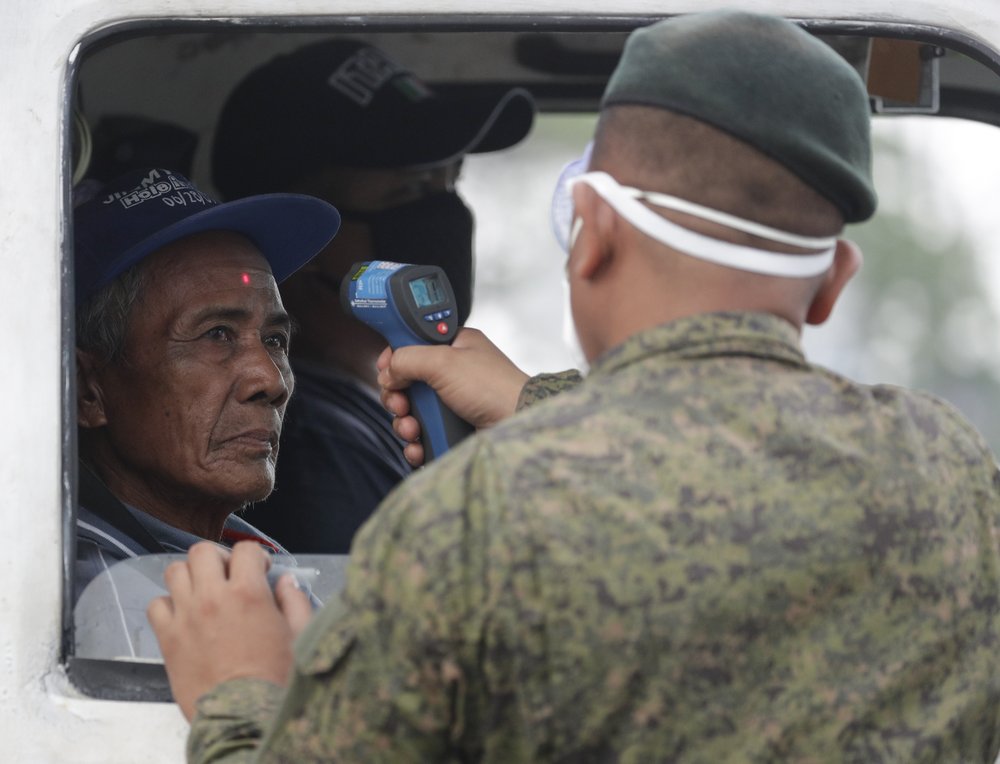 A man's temperature is checked by an army trooper before entering the metropolis at a checkpoint on the outskirts of Quezon city, Philippines Sunday, March 15, 2020. Thousands of Philippine police, backed by the army and coast guard, have started sealing the densely populated capital from most domestic travelers in one of Southeast Asia's most drastic containment moves against the coronavirus. For most people, the new coronavirus causes only mild or moderate symptoms. For some, it can cause more severe illness, especially in older adults and people with existing health problems. (AP Photo/Aaron Favila)

MANILA, March 15: Thousands of police officers and army troops started sealing the Philippines’ densely populated capital on Sunday at the start of one of Southeast Asia’s most drastic containment moves against the new coronavirus.

Under monthlong restrictions imposed in the entire Manila metropolis — home to more than 12 million people — residents are compelled to stay at home, except when they need to leave for work or go on urgent errands, including medical emergencies.

Police and soldiers set up checkpoints at entryways to Manila to check commuters for fever with thermal scanners on Sunday, snarling traffic all day. But despite the delays, most commuters remained patient, with troops politely apologizing.

“The traffic is heavy and this is disruptive, but it’s OK. It’s for our own good, for our health,” said one commuter, Teresita Paraon.

A driver stuck in a traffic jam, Romel Gaso, said, “We cannot do anything but follow the protocol if we don’t want to make things worse.”

The metropolis-wide restrictions involve the suspension of domestic travel by land, air and sea to and from the capital region. Large gatherings including concerts, movies, parties and cockfighting are prohibited and most government work in executive department offices will be suspended in the metropolis. School closures at all levels were extended by a month.

Enforcement of the containment moves appeared lenient in some areas on Sunday, but officials said law enforcers would be stricter in the coming days.

Movement of cargo and food shipments will continue unhampered, they said.

Traffic jams have long been a part of life in Manila, even on weekends, with the bustling capital home to some of Asia’s largest shopping malls. But traffic in the city was considerably lighter on Sunday and some usually crowded Roman Catholic church areas looked barren.

In a chapel in suburban Quezon city, a Catholic priest celebrated Mass with an altar boy and an organ player in front of empty wooden pews. A cameraman live-streamed the Mass to devotees on Facebook after church leaders canceled Sunday Masses due to the virus outbreak.

Philippine health officials reported 29 new cases of coronavirus infections Sunday, bringing the number of cases in the country to 140. Eleven of the infected have died.

While the virus can be deadly, particularly for the elderly and people with other health problems, for most people it causes only mild or moderate symptoms, such as fever and cough. Some feel no symptoms at all and the vast majority of people recover.

Manila’s usually crowded international airport banned non-passengers in its terminals and discouraged those without confirmed flight bookings from going to the airport.

“The considerable number of chance passengers causes overcrowding inside the airport terminals and goes against the social distancing measures being implemented by the government,” airport officials said in a statement.

Several mayors have announced plans for night curfews, which they said would start in the next few days once legal requirements are completed. Shopping malls have been asked to close to discourage crowds, but grocery stores, drugstores and banks will be allowed to stay open.

Interior Secretary Eduardo Ano said the 8 p.m. to 5 a.m. curfew, which was proposed by 17 mayors, would apply to nonessential trips and leisure gatherings like parties, family reunions and concerts. Stressing the urgency of the move, he cited the case of Italy, where he said the numbers of coronavirus infections and deaths alarmingly spiked because effective containment steps were not put in place early.

Police Lt. Gen. Guillermo Eleazar said cities and towns would enforce the curfew once their separate councils have authorized it in the next few days.

The Associated Press receives support for health and science coverage from the Howard Hughes Medical Institute’s Department of Science Education. The AP is solely responsible for all content.

Netherlands coronavirus tally at 1,705, with 43 deaths

AMSTERDAM, March 17: The total number of confirmed cases of coronavirus in the Netherlands stood at 1,705, health officials said an... Read More...