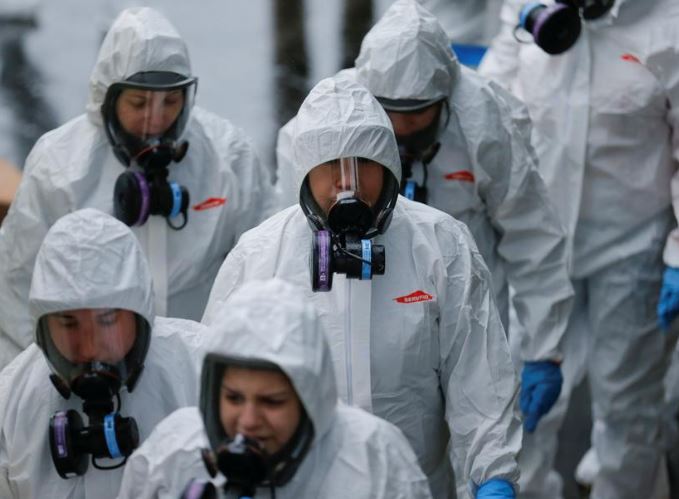 CHICAGO, March 14:  As President Donald Trump declared a national emergency, the coronavirus pandemic pushed Los Angeles and Chicago to suspend classes, delayed two of the country’s best-known sporting events and triggered a run on food supplies at some grocery stores.

Trump’s declaration would “unleash the full power of the federal government” to bear on the escalating health crisis by freeing up some $50 billion in aid, Trump said at the White House. He urged every state to set up emergency centres to help fight the virus, which has already killed at least 47 Americans and infected nearly 1,700.

Speaker of the House Nancy Pelosi said a deal with the Trump administration on a coronavirus aid package had been struck and would soon be passed by lawmakers.

Outside of Washington, the crisis extended deeper into the daily routine of American life. The Los Angeles United School District, the country’s second largest with 750,000 students, will close all schools for two weeks beginning Monday while it evaluates what to do next.

“This will be a challenging time for families and put a strain on teachers and students, and each of us can play a part in supporting them,” Los Angeles Mayor Eric Garcetti said.

San Francisco, San Diego, Miami and Washington, D.C. were among the other big cities telling students on Friday to stay away from class for two or three weeks.

In Illinois, Governor Jay Pritzker said all public schools in the state, including those in Chicago, would close beginning Tuesday through March 29. A handful of states, including Ohio and Michigan, have announced similar shutdowns.

In the world of sports, Boston said it would stage its prestigious marathon on Sept. 15 instead of April 20 because of coronavirus. The 26.2-mile race has been held every year since 1897. The Masters, golf’s opening major, was also postponed.

Ryan Starbuck, who was looking forward to running his seventh Boston Marathon next month, said the postponement would upend his usual schedule of two to three marathons a year.

“I think it’s absolutely the right decision to move it,” said Starbuck, 34, of Denver, who easily qualified for the elite race with a time of 2 hours, 40 minutes. “I was expecting them to come to this decision. I just wish it came a little bit sooner,” he said.

Across America, shoppers preparing to hunker down at home hit stores in droves to stockpile supplies of food and other essentials like toilet paper, cookies, pasta and paper towels as coronavirus concerns stoked fears of shortages.

The Wegmans supermarket in Hanover, New Jersey was packed by mid-morning, with some 40 customers lined up waiting for it to open. Some shelves were stripped bare of sanitary items such as anti-bacterial wipes and food staples like bulk rice and dried beans. Others were posted with signs limiting purchases of hand sanitizer and bottled water.

“What I’m most worried about is panic, because that’s when people make poor decisions,” said Marlene Russell, 69, a retired school guidance counsellor, as she wiped down the handle of her shopping cart with an anti-bacterial cloth.

Coronavirus took its biggest toll yet on this year’s U.S. presidential election when Louisiana announced on Friday it had postponed its Democratic and Republican presidential primaries.

The state said it will push the nominating contests back two months from April 4 due to the virus.

In a sliver of good news for the U.S. economy, Wall Street staged a furious rally in the waning moments of the session on Friday after Trump’s declaration of a national emergency.

The Dow Jones Industrial Average .DJI rose 1,985 points, or 9.36% but the indexes were still about 20% below record highs hit in mid-February.

One main concern in the United States is a lack of tests, hampering the ability of health authorities to track the spread and preventing many patients from getting proper diagnoses. The

U.S. Centers for Disease Control and Prevention (CDC) on Friday reported 1,678 U.S. cases of coronavirus, an increase of 414 from its previous count, and said that the number of deaths had risen to 47. Worldwide, the virus has infected 138,000 people.

But a lack of tests to date has hampered the ability of health authorities to count cases accurately and track the spread, preventing many patients from getting proper diagnoses.

In announcing the emergency declaration at a White House briefing, Trump said the federal government was partnering with the private sector to accelerate production of test kits.

He said there will be about 5 million coronavirus tests available but doubted that that many will be needed. He urged Americans only to seek out the test if they feel they need it.

“We don’t want people to take a test if we feel that they shouldn’t be doing it and we don’t want everyone running out and taking - only if you have certain symptoms,” he said.

Alongside Trump was Anthony Fauci of the National Institutes of Health, the nation’s top infectious disease expert.

“We still have a long way to go. There will be many more cases. But we’ll take care of that,” said Fauci.

KATHMANDU, March 23: Due to grappling fear of outbreak of novel coronavirus (COVID-19) in Nepal, people are found to have... Read More...

INFOGRAPHICS: How to use mask properly?

Wearing a mask is one of the safety precautions against this pandemic. Here are some basic information relating to using... Read More...