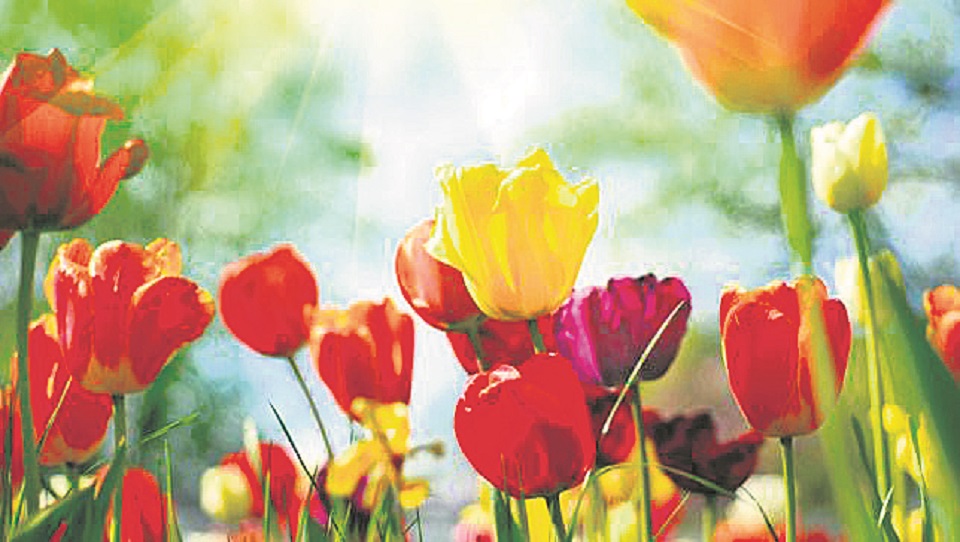 Spring is the most consequential season when most species of bees, birds and insects choose to actively engage in copulation and procreation. Most wild and many domestic animals get pregnant during spring

Spring is all about the grandeur of nature. The red and pink rhododendron blossoms smile effusively against the snow white mountains. Simal(red silk cotton tree) blossoms wondrously beam by the frothy rivers in the vales. White, pink, purple and magenta petals of pear and peach blossoms flash shy smiles while embraced by the breeze by hamlets and creeks. The orchids magnificently sway by the tree branches in the woods. This is perhaps the best of all seasons to learn from nature and live accordingly.

Madison Taylor has made a succinct observation in her book DailyOM: “Nature is a mirror, inspiring us, teaching us, and developing our sense of belonging in the world. We live our lives according to the same principles as the trees, the mountains, the clouds, and the birds. We begin life in the womb, folded in ourselves like the bud of a flower…when we emerge from the womb, we slowly commence our unfolding, just  as the flower begins to open its petals …thoughts are akin to clouds: appearing, changing shape, passing through the sky without a trace, just as an emotional release cleanses our mind”.

Our insights and rhythms of life are shaped and defined by how we connect to and behave in nature. The blossoms draw many birds, bees and also insects to them and also the eyes of appreciative human. It’s always painful to see them fading and returning to the earth if we forget death is just one part of the cycle.

Above all else, spring is the most consequential season when most species of bees, birds and insects choose to actively engage in copulation and procreation. Most wild and many domestic animals get pregnant during spring. A close observation of the natural occurrences during this season helps us make sense of this copulation conundrum underlying every creature’s lifecycle.

Season of mating
Birds mate during spring as there are adequate insects to feed on and to feed their fledglings. There are enough canopies of leaves of trees for protection of their nests and young ones from the heat. Similarly, frogs carefully plan their generational expansion as the female frogs release eggs and the male frogs release sperm on them during summer when the trenches, terraces, and canals overflow with water for their embryos to safely develop from tadpoles into young frogs before the water dries up.

The sole objective of mating is not to seek pleasure but to secure their genes for generations to come for most species of insects, animals and birds with the exception of human beings. They desire to create as many successors as possible to outnumber their competitors. Same applies across and among the species as they want to see their species grow exponentially.

The bees are no exception to this natural principle. Worker bees (approximately one thousand per drone bee) collect the most pollen and nectar in the spring to make the most honey for drone bees and larvae to eat while the queen bee enjoys royal jelly (‘a protein-rich secretion from glands on the heads of young worker bees’). The drone bees (roughly a hundred in a hive) mate with the queen bee to fertilize the eggs she lays (upto two thousand eggs each day) to expand the colony.

That means every drone bee has to mate twenty times a day in an average to remain competitive. Otherwise, it runs the risk of being kicked out of the hive cell. During lean seasons (winter), many of them starve to death owing to dearth of honey to eat and strength to impregnate the queen bee. Even the older queen bee is replaced with a young queen bee born and raised in a special hive cell and fed with royal jelly to grow double the size of ordinary bees and to be the most productive.

This fierce and ruthless reproductive capacity related survival strategy in the beehive is a stark reminder of what goes on within every species of creature. It’s unthinkable that hierarchy, conflict, segregation, and death coexist in a beehive. In addition, it’s surprising to know that the drone bees don’t have a stinger, that the worker bees possess but they too are not immune from death upon its maiden usage as it is unretractable.

However, I am nonplussed about the fact that humans (who are mostly on the prowl for mating for entertainment sake only) are the most poisonous animals on the earth who go about stinging people by whatever means (connections, money etc) they can access without having to suffer unlike the worker bees.

Human exception
Human beings are an exception to the principle of the natural world that mating is primarily carried out to cope with the underlying fear of being outnumbered by others. It’s understandable that their obsession with mating or copulating in any place, at any time of the day and in any season or month of the year sets them apart from the most of the creatures due to their inherent sense of insecurity. But they erroneously take it for granted that insemination is a way of feeling unalienated and abandoned.

We know that human beings are vulnerable to greater risks of being outnumbered real quick as it takes a long time to raise a baby into a child. “…Compared to other animals, humans are born prematurely, when many of their vital systems are still under-developed. Human babies are helpless, dependent, for many years on their elders for sustenance, protection, and education…we are full of fears and anxieties over our position, which makes us doubly cruel and dangerous”, writes Yuval Noah Harari in his seminal book Sapiens A Brief History of Humankind.

But, is there any justification to our indiscreet behavior about the limited natural resources and natural world? We have failed to live in the nature. We have failed to live to the nature. This is a proof that humans are the most incoherent and consistently inconsistent animal inhabiting the earth. From resourceful young to dried-up old people, their eagerness to indulge in and entangle in each other’s groins is an aberration to the natural principle of copulation.

“The flowers that bloom in the garden are called flowers, and the flowers that bloom in the vacant lots are called weeds”, says Margaret Renkl in Late Migrations: Natural History of Love and Loss. Would  it be deemed an overstatement if I said that the creatures that mate once a year during certain season to preserve their genes act natural and rational but the creatures that mate around the year act unnatural and irrational?

Anyway, our reckless action with regard to squandering nature and creative energies belies our    own claim that we are the wisest and the most rational creature on the earth. No other creature has ever brought the scale of destruction upon the natural world like human beings have. The problem with knowing a disaster is in the making around us is that we can’t un-know this. The problem with learning to disrupt the forces of nature negatively is that we can’t un-do this.

Margaret Renkl warns: “The path of the migrating songbirds has been synced to the growing season of plants that now bloom and fade out of their once typical seasons”. As a result, there are less sparrows chirping by our roofs and hay stacks. There are less crows cawing by our front yards.

There are less songbirds migrating to sing in the spring in the orchards by our homes. The hawks are getting more hawkish and the doves are getting less dovish. The spring of life and natural world are virtually thrown out of order.

When spring blossomed in my life

I first met her three years back when it was spring. I saw her is the school’s ground. She was... Read More...