Ireland to shut schools and universities over coronavirus 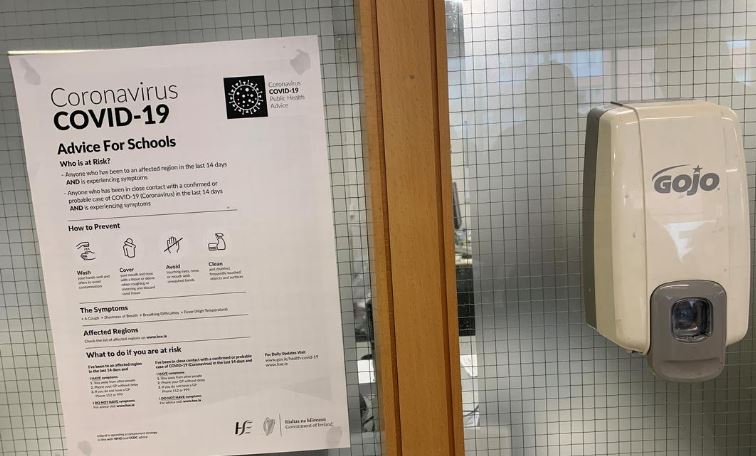 FILE PHOTO: A coronavirus advice notice is seen next to an anti-bacterial gel dispenser in a college in Dublin, Ireland, March 4, 2020. REUTERS/Phil Noble

Ireland’s chief medical officer said the government had turned to measures to try to delay the spread, rather than simply contain it, following fresh case information late on Wednesday.

Details on new cases will be provided at 1730 GMT.

Ireland confirmed its first death of a patient diagnosed with the coronavirus on Wednesday as the number of confirmed cases of the virus rose to 43 from 34 a day earlier. There are also 18 cases in Northern Ireland, the British region which shares an open border with the Irish republic.

“From 6 pm today, the following measures are being put in place and they will stay in place until March 29: schools, colleges and childcare facilities will close from tomorrow, where possible teaching will be done online or remotely,” Varadkar said in statement.

Within an hour, long queues formed at supermarkets in central Dublin despite repeated calls by ministers not to resort to panic buying.

Varadkar encouraged people to limit social interactions and for offices to stagger break times and hold meetings remotely to limit contact. While restaurants can stay open, they should look at how to operate social distancing, he added.

Public transport will continue to operate and shops will remain open with plans in place to ensure supply chains will not be interrupted, he said.

On Monday, Ireland cancelled all St. Patrick’s Day parades which draw hundreds of thousands of revellers, including tourists from around the world, each March.

At a separate news conference, Deputy Prime Minister Simon Coveney said measures were planned for people arriving at airports from affected areas, but that airports will not be closed.

He also said parliament will still sit next Thursday to vote through emergency laws to boost sick pay, part of a 3 billion euro package announced this week that the finance minister said could push the state’s finances back into deficit.

Initial talks to form a new government between Varadkar and Coveney’s Fine Gael party and rivals Fianna Fail following an inconclusive Feb. 8 election will be postponed for now, Coveney said.

Earlier on Thursday Dublin’s Mater Hospital, one of the capital’s main hospitals, postponed all outpatient appointments and elective surgeries until further notice.

It said in a statement that staff in every part of the hospital “are working around the clock” to deal with the virus.“In the period ahead, the government will deploy all the resources we can muster. They are extensive but not unlimited,” Varadkar said in the statement which was broadcast on national television from Washington, where he is due to meet President Donald Trump on Thursday.

“This is going to involve big changes in the way we live our lives and I know I’m asking people to make enormous sacrifices. Acting together as a nation, we can save many lives.”

Slovakia will introduce border checks, stop international travel to and from the country and close schools as it steps up measures to battle the spreading coronavirus, Prime Minister Peter Pellegrini said on Thursday.

The central European country, which has so far reported 16 cases of the new virus, also plans to close sport, leisure and entertainment centres like ski areas, pools and clubs, and will shut shopping centres over weekends among its measures.

KATHMANDU, March 16: The Government has expressed commitment to extending all necessary supports, within the maximum extent of our capacity,... Read More...

Cabinet meeting underway in Baluwatar, likely to endorse recommendations made by CCMC to contain spread of COVID-19
10 hours ago