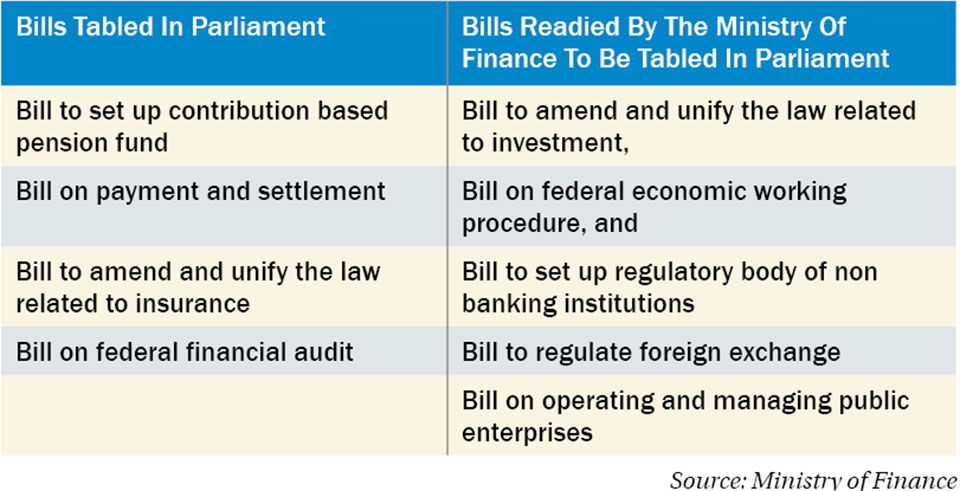 KATHMANDU, Aug 19: The government has tabled four bills related to economy and finance in the federal parliament, while five more bills are on the pipeline. The bill to set up contribution-based pension fund, bill on payment and settlement, bill to amend and unify laws related to insurance, and bill on federal financial audit have already been tabled in the parliament.

Similarly, the government is preparing to table the bill to amend and unify the law related to investment, bill on federal economic working procedure, bill to set up a regulatory body of non-banking institutions, bill on operating and managing public enterprises, and bill to regulate foreign exchange, according to Minister for Finance Yuba Raj Khatiwada.

With the tabling of the bills, the government has intensified the process of drafting laws to facilitate the implementation of federalism, give  an impetus to economic reform, and improve the public delivery process.

Some of the bills that the government has moved forward for the approval of the parliament were long due. For example, the amendment process of the insurance bill was initiated nearly a decade ago, but it was stalled due to reluctance by previous finance ministers to push it.

Likewise, though there had been talks to create pension fund on a contributory basis for government employees, the new system was not getting implemented due to lack of the law governing the pension fund.

Similarly, the bill on federal financial audit will give a legal foundation to conduct auditing and publishing the report of federal, provincial, and local governments in the new federal set up.

The government is also preparing to table the bill to amend and integrate various acts related to investment. Finance Minister Khatiwada said that the new bill will address the issue of public-private investment.

“The bill to amend and integrate acts related to investment will, among other, address various problems seen in the investment act as well as govern the investment on projects of public private partnership,” Khatiwada told a press meet on Friday.

The NRB along with other stakeholders have long been calling for the creation of second-tier institution to regulate such non-banking institutions that risk destabilizing the financial system in the lack of regulatory and supervisory body.