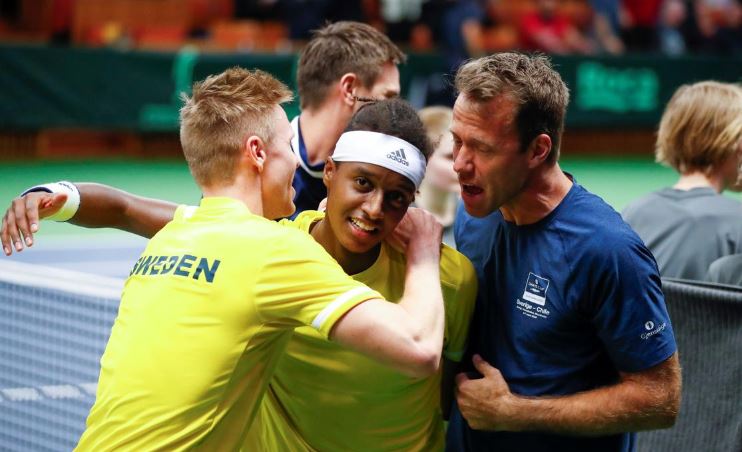 Ecuador, Sweden, Hungary, Czech Republic and Austria will all be in next week’s draw for the 18-nation showdown at La Caja Magica in the Spanish capital in November, having missed the inaugural finals last year when the international teams event was revamped.

Ecuador’s 3-0 victory over Japan was less surprising than it might look as hosts Japan were without Kei Nishikori because of injury and world number 48 Yoshihito Nishioka, who did not travel because he was concerned that the coronavirus crisis would prevent his return to the United States.

The match in Miki was played with no fans.

The South Americans made light of the strange environment, however, with Gonzalo Escobar and Diego Hidalgo securing the winning point in a decisive doubles victory over Ben McLachlan and Yasutaka Uchiyama.

Sweden, who won the Davis Cup on seven occasions between 1975 and 1998 but have been in the doldrums, beat Chile 3-1 with Mikael Ymer claiming the decisive point.

Hungary, who will host this year’s revamped Fed Cup finals, claimed a thrilling 3-2 win over Belgium.

Trailing 2-1 after Saturday’s doubles, they went through with singles wins for Attila Balazs and Marton Fuscovics.

Czech Republic did not have to travel far to book their ticket, just across the border to Bratislava where they completed a 3-1 victory over Slovakia.

Austria, without world number three Dominic Thiem, ended the hopes of Uruguay in Graz with Dennis Novak beating Pablo Cuevas to give his side a 3-1 win.

India caused a stir in Zagreb where veteran duo Leander Paes and Rohan Bopanna edged Mate Pavic and Franko Skugor in Saturday’s doubles to keep alive the tie with Croatia. But Marin Cilic quickly doused Indian hopes with a 6-0 6-1 win over Sumit Nagal.

Italy crushed South Korea 4-0 in Cagliari in another tie shorn of fans because of coronavirus concerns.

Kazakhstan will be in Madrid for the second year after beating the Netherlands.

Six teams had already qualified for the Madrid showdown, the second version since the event was revamped in a $3-billion deal over 25 years between the ITF and Kosmos, the Spanish investment firm of Barcelona soccer player Gerard Pique.

Last year’s winners Spain, runners-up Canada and losing semi-finalists Britain and Russia, as well as wildcards Serbia and France did not need to play in the qualifiers.

Spectator's stands are seen empty during a tennis match between Japan and Ecuador in a Davis Cup qualifier which is taking behind closed doors amid the spread of the new coronavirus, in Miki, Hyogo prefecture, Japan, March 6, 2020, in this photo taken by Kyodo. Kyodo via REUTERS

Former Nepali envoy to Pakistan no more
13 hours ago