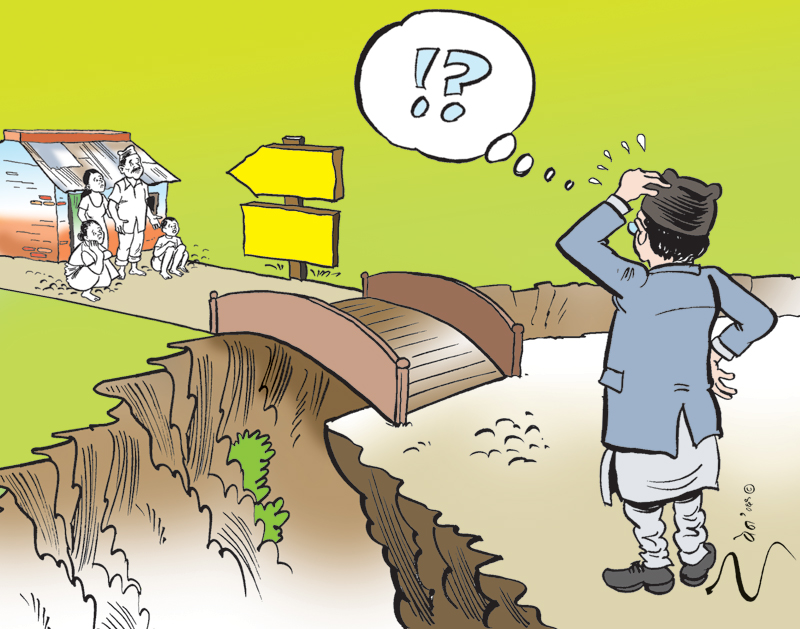 Over-politicization of society has hindered development initiatives in Nepal’s countryside
Politics generally divides us. It also limits us. And I am not talking about the amazing US elections where Mr Donald ‘Badboy’ Trump has just trumped almost every punditry to conquer the White House.

It may not be politically correct to declare but I care very less about US elections. I did not even follow the campaign. Here I am referring to the politics at our villages and towns.

Dashain, the festive holiday season of Nepal, when even newspapers are not published for a week, brings a wonderful influx of new energy in our countryside.

At all other times, these days, because of the remittance economy, our Moffusil remains almost always weak, old and lifeless. The beautiful terraced fields in the hills are barren and it’s difficult to spot young people in the villages and towns.

But the festival season is different. It’s the capital that is deserted at that time. A mass exodus of sorts takes place. The valley breathes in great relief. People, from everywhere, flock back to their villages and towns. That’s the time when family get-togethers, school and colleges reunions and many other social functions are organized.

This time, while I was in my hometown, I was invited to one such event. A local writer, and poet, and teacher, and political leader, was being remembered and commemorated posthumously. Bheshaj Raj Sharma was an expert on Sanskrit Grammar and was well reputed in the region as a teacher.

He had written many books, most of them with political undertones. He was a Marxist intellectual of the Panchayat era. It is strange, in many ways to think of a Sanskrit Grammar Scholar as a Marxist leader, but that is the beauty of the intellectual mindscape in Nepal. It happens, aplenty.

And nowadays, even Baburam Bhattarai, the brain behind the Maoist war in Nepal, the chief ideologue under whose leadership Sanskrit education was forcefully stopped in our schools during the conflict era, uses Sanskrit shlokas to prove his Marxist-Leninist-Maoist points. But we will talk about him somewhere else, may be. For now let’s focus on our local protagonist.

One book, which got special attention during the function, was about Shravan Kumar, the ideal son of the Ramayan, who had carried his old and blind parents on his shoulders for pilgrimage. He was killed by the king Dashrath during a hunting expedition. A legend connects the origin of the river Andhikhola of Syangja district to this event. The river, it says, originated from the tears of the blind parents of Shravan Kumar after his murder.

Bheshaj Raj Sharma, the author, addresses the King in an insulting tone and showers unconditional love on Shravan Kumar. Written in classical Sanskrit verse, the story challenges the traditional power structure. And hence there was no question of such attempts being given space in the mainstream literature during the Panchayat era.

That was a different era. Such challengers were punished, forget being recognized. But it is strange that politics, in a different way, is limiting us at the grassroots level even today.

Because he was a Marxist and he was associated with a particular party, the people present at the event were mostly from that party. The function almost was like a political gathering of the party. I was, in fact, saddened to see that the point that he was more a writer than a political leader was lost.

It’s not just limited to controlling the narrative or ignoring the messengers. It’s a malaise that has crept into almost every field in Nepal. There is a very stark example of my home-town. A drinking water project, which was supposed to be operated for Waling Municipality, was stalled because of the political divide.  It is still stuck after 25 years.

Over-politicization, I feel, is one of the reasons why the Mofussil is still weak. So, in a strange way, the politics that is supposed to empower our margins is doing exactly the opposite.

There is an urgent need to upturn many things in Nepal. The way we do politics surely is one of them. A bottom-up model, where the local icons are celebrated more, would be an apt change.

Only a united Mofussil, which ignores the vertical splits imposed from the top, can challenge the status quo.

We have a number of politicians who think election is all about money and muscle, and this ails Nepali politics ... Read More...