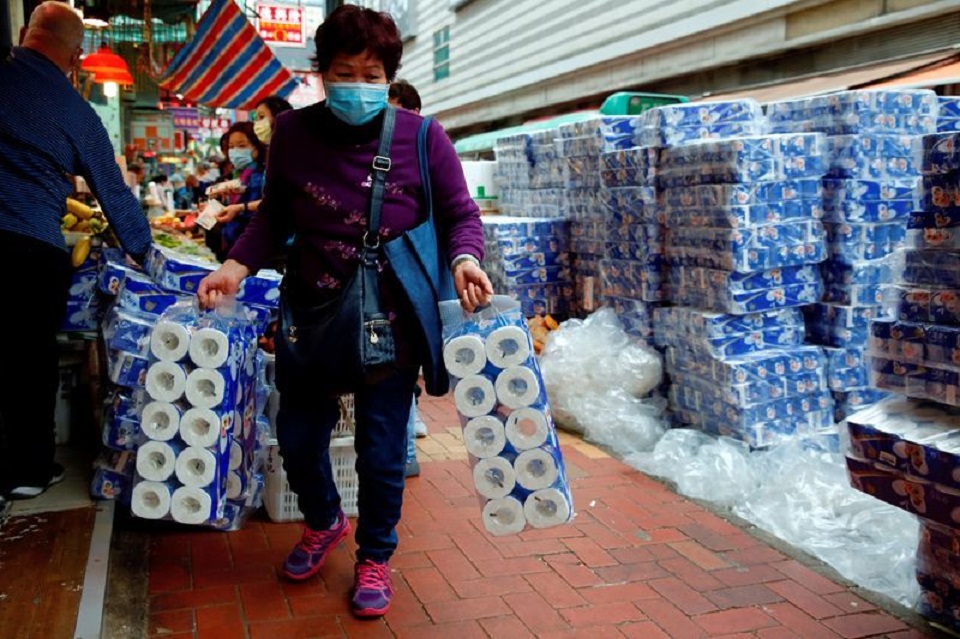 SYDNEY/TOKYO, March 6: In Australia, major grocers have restricted supplies to one pack per person. In Japan, rolls are chained to the wall in public toilets. In Hong Kong, armed robbers carried out a heist as supplies were delivered to a supermarket.

Toilet paper has emerged as the unlikely No.1 stockpiling target for people across Asia who are worried that the spread of the coronavirus epidemic will lead to supply shortages.

While other household products - including disinfectants, tissues and staples like rice and pasta - have also proved popular, it is the humble toilet roll that has inspired showdowns in supermarket aisles and countless social media memes.

The demand has caught many shoppers and sellers short, but psychologists say hoarding is a natural human reaction in times of high anxiety - and a desire to ensure sufficient supplies for lavatory visits in particular is not too much of a surprise.

“When we’re buying stuff, things close to the body are very comforting, whether that be food, body care or in this case toilet paper,” Adam Ferrier, a Melbourne-based psychologist who specializes in consumer behavior, told Reuters.

In Australia, police were called out to settle grocery aisle disputes, a delivery truck catching fire due to a mechanical fault made national headlines, and outback newspaper The NT News published an eight-page liftout of blank paper saying the move was to give the nation what it wanted.

“It’s been a wild week. Everyone’s been on the edge of their seat looking at what’s happening,” said Simon Griffiths, co-founder of Who Gives A Crap, a social enterprise that sells recycled toilet paper and gives half its profit to sanitation-related charity.

The company had to suspend store sales and new subscriptions on Wednesday when sales volumes jumped 1100% the day before.

In Japan, the economy ministry has launched a publicity campaign to urge calm, posting daily photos on its Twitter account of delivery trucks carrying toilet rolls arriving full at their destinations and of replenished store aisles.

“We wanted to send a message for consumers to understand that inventory was arriving,” ministry spokesman Yasushi Nozawa told Reuters, adding that while there was no shortage of supply of toilet rolls, distribution networks were struggling to keep up.

“Inventory has piled up at warehouses,” he said. “We have requested a doubling of daily delivery capacity from 20 million rolls to 40 million.”

It’s not the first time Japan has succumbed to toilet paper fever. During the global oil crisis of 1973, there were violent scenes in some stores as people rushed to buy bathroom tissue, fearing disruption to production.

Singapore-based academics Roland Bouffanais and Lim Sun Sun said this time around, social media played a major role in making the worries of a toilet paper crunch “propagate like a wildfire.”

“Collective behaviours among humans are remarkably similar to processes in the animal kingdom such as schooling among fish and flocking among birds,” they wrote in an editorial about toilet roll hoarding in the Straits Times newspaper.

The situation has also led to some unusually frank comments by Asian politicians.

Singapore Trade Minister Chan Chun Sing was reported by local media as calling the panic buying idiotic in a meeting with business leaders, quipping: “Why stock toilet paper? If you eat all the rice and instant noodles you confirm diarrhea.”

In Taiwan, during a brief toilet paper panic last month, Premier Su Tseng-chang called for calm on his Facebook page, saying people “only have one butt-hole,” to widespread amusement across the island.

After a week of panic buying, Japan’s biggest supermarket chain Aeon Co resorted to stacking up 12-roll packs in prominent displays at some of its stores to reassure customers there was plenty to go round.

“Our goal is to eliminate people’s fears,” said Aeon spokesman Daisuke Yokota. “So we’re piling them into these huge towers, to send the message: boom, there’s plenty.”

KATHMANDU, March 20: The National Assembly has been suspended until further notice. ... Read More...

BEIJING, Feb 17: The Chinese parliament’s top committee will meet on Feb. 24 to discuss whether to delay the annual March... Read More...