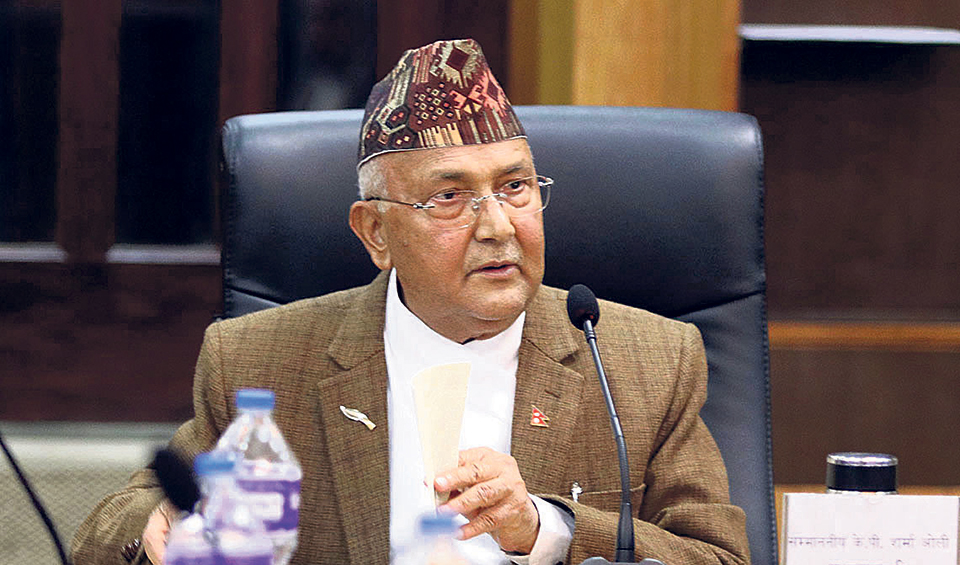 The government of KP Oli completed its two years on February 15.  During the elections in 2017, the left alliance composed of CPN(UML) and CPN(Maoist Center), which merged into Nepal Communist Party (NCP) later on,  had unveiled many two-year and five-year plans, in its election manifesto. It won the elections based on those plans and promises.

Promise vs delivery
The two-year plans in the election manifesto included making Nepal self-sufficient in five agricultural products such as basic food, fish, meat, eggs and milk. Empirical facts demonstrate, Nepal is still far from being self-sufficient in these products. For example, according to the statistics of Ministry of Agriculture and Livestock Development, Nepal imported main crops and  meat worth of NRs 71 billion and NRs 70 billion in the fiscal years 2018/2019 and 2019/2020 respectively.

The manifesto also said that Bhairahawa Airport would be completed within two years. It is still incomplete. Other two-year plans included  replacing petroleum-fueled vehicles with electric vehicles, compensating and rehabilitating the victims of conflict, reviewing and replacing all unequal treaties including the 1950’s treaty with India and making a diplomatic effort to resolve border issues, among others.  They have not been implemented either. It was said that price list would be made mandatory in all shops and that prices and quality of food would be monitored regularly. This has not happened. Though sometimes it monitors quality of food products, it does not do so seriously. Monitoring is not only infrequent but also seems to be done for the sake of formality.

The fact that only 18 percent of total development budget has been spent so far shows how poorly the government is performing.

The second criterion is not easy to meet because even the governments of many rich countries have not succeeded in ensuring the positive changes in the lives of all people. This is the reason why a systematic debate on the best model of development that began in the late eighteenth century is still going on in the realm of development thinking.  However, if those who are running the present government had been both intellectually and practically capable of carrying out their responsibilities effectively, they would have contributed to the amelioration of the difficult living conditions of the poor section of Nepali society to some extent.

When we assess the performance of the last two years against both of these two criteria, we find that it is not satisfactory. There are three kinds of people who assess the government’s performance. The first kind deliberately hides the weaknesses of the government and bring to the fore its successes. The second kind pays heed to its weaknesses only and intentionally conceals its strengths. And the third kind adopts a critical perspective on its performance. I belong to the third type and I do not claim the government has done nothing. A critic should not deliberately hide the positive aspects.

Of course, certain things have been accomplished. The task of installing the 69-kilometre-long Motihari-Amlekhgunj petroleum pipeline was completed in September, 2019 ahead of its deadline. During Chinese President Xi Jinping’s two-day state visit to Nepal in October, 2019, 18 memorandum of understandings (MoUs) and two letters of intent were signed. They include the MoU between the Ministry of Physical Infrastructure and Transport of Nepal and the Ministry of Transport of China on the Feasibility Study of China-Nepal Cross-Border Railway Project and the MoU between the Ministry of Finance of Nepal and China International Development Cooperation Agency on Tunnels Construction Cooperation, among others.

Illusion of success
On the basis of these, the government supporters claim achievements. But this claim needs to be examined critically.  They make such claim for different reasons. Some do so because they honestly think so. On the contrary, others claim so not because they really think so but because they are guided by certain vested interests. They deliberately exaggerate performance.

The reason why some honestly believe that the present government has done many things lies in the relativeness of the notion of ‘many’. Therefore, their controversial claim is attributable to the relativeness of what the term ‘many’ means. Up to this point, they are not untenable: the linguistic fact, that is, the conceptual relativeness of the term ‘many’, protects them against criticism. But, when we move the analysis of their claim from the linguistic level to the logical level, we find that they are untenable. There is a very long list of things the present government is expected to do. The list of things that it has done and that its supporters think are many in number forms a very insignificant part of the whole list of things it is responsible for. Therefore, when we look at the number of the things it has done so far from this viewpoint, we cannot logically say that it has done many things. The conclusion those who assess its performance from this viewpoint arrive at is that there are many things it needs to do and that it has done only a few of them.

I think the claim made by the supporters of the present government is harmful not only to the country but also to the political future of NCP itself. There are still three years left before the present government’s duration comes to an end. If it takes into account the above-mentioned conclusion and corrects itself by putting people’s interests first, it can do many, if not all, things within the next three years.

Excuse for failure
Supporters of the Oli-led government account for the government’s fundamental, if not complete, failure in four ways. First, the government was too busy making administrative and legal preparations for the implementation of the federal structure composed of three layers-federal, provincial and local. For example, they point out the fact that enacting laws related to the implementation of a federal system proved to be a time-consuming process. Second, the ruling party is embroiled in the internal conflict. Third, the PM Oli controls the ministers. Fourth, bureaucrats are recalcitrant. It is true that these four reasons adduced by the supporters of the present government cannot be ignored in explaining the government’s failure as comprehensively as possible. However, they are secondary reasons.

Let me classify the present government’s plans into two categories—practically possible plans (such as corruption control and ending a syndicate system in public transport) and conditionally possible plans that are viable only under certain conditions beyond national control (such as catching up with the developed countries). As I indicated above, there is not a strong reason to criticize the present government for its failure to accomplish the plans belonging to the second category. Only its failure to successfully implement the plans subsumed under the first category provides us with a strong reason to criticize it in the intellectually harshest possible terms.

The main reason behind Oli-led government’s failure to accomplish the plans that belong to the first category is not that it did not have enough time to implement them as its supporters argue. Instead, the main reason is that it is neither capitalist nor socialist. Likewise, it is neither social democratic nor democratic socialist. It is no more than a group of people obsessed with personal aggrandizement. Purely capitalist government and purely socialist government are not problematic up to a certain level of development where Nepali society has yet to reach. Part of the reason also lies in the continuity of the administrative status quo that is in favor of bureaucrats including ministers and against a large number of poor people.