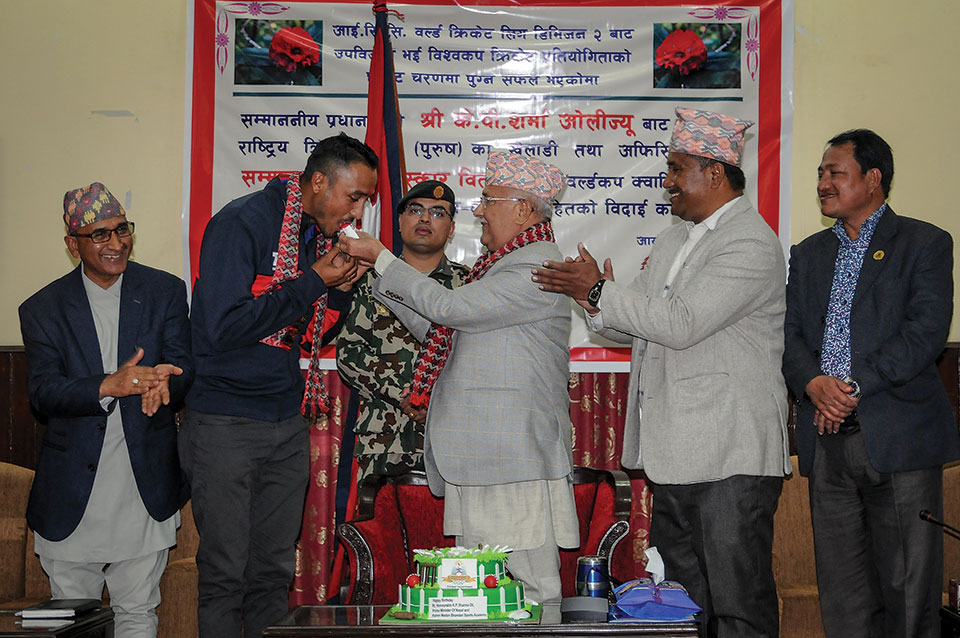 First of all, let us take a sip of our doodh chiyas and give a round of applause to Gokul dai for resigning from office. Our former (mis)information mantri can now start writing a weekly column for one of our newspapers since he will have a lot of free time. Gokul dai is not the first mantri to ask for commission from big shady deals. He would have given some of it to his mother party, some to his spouse, some to his near and dear ones and they would all have had some fun with the free illegal money.

Our ward chairpersons around the country are minting money left, right and center. Our mayors are making tons of moolah from shady contractors. So why are we so surprised by our mantris asking for bribes from our byaparis? After all, you have to pay to get the ticket to stand up for election and if you become a mantri, you better bring home some bacon for your mother party or else you will not get to be a mantri again and again.

But Gokul dai should have known better. Well, I think he was too smart for his own good. If you really want to talk illegal deals then it’s better to not talk it over the phone. Go to Gokarna Forest Resort, have a cup of coffee, walk around the golf course and do your deal. I think our mantris should know better. If not, then watch a few movies about the Italian mafia in New York.

Well, John Gotti had to die in prison but there are other mafia bosses who have managed to stay home because they discuss their deals while on a walk or somewhere else where the chances of being wiretapped or recorded is minimal. After all, our politicians are the mafia dons of today and they should probably watch the ‘Godfather’ series to learn how to act like a mafia boss instead of acting like pickpockets.

Let’s get back to the talk of the town. Oli ba celebrated his birthday not at some five-star resort but back in the village where he was born. Whoever gifted the cake to Oli ba should be jailed for a year or two for the worst cake design ever. You don’t make a cake of Nepal and then ask the PM to cut it. Why not just make a simple cake instead? And why are we so surprised once again by the Yeti folks personally delivering the cake in their own helicopter? Let them have all the fun because it’s their time to make as much money as possible as long as these buffoons are in power. And don’t worry, they will continue to have fun even if the congressis or any other coalition government comes to power the next time around. After all, they are byaparis and they will figure out a way to make deals with whoever is in power.

Oli ba must certainly live in a bubble. We have to feel sorry for ourselves because our prime minister also has a hearing defect. He doesn’t listen to the people or the press. He listens only to his puppets. If Oli ba is true to his words then he will hand over the keys to Prachanda soon. Let us hope Prachanda will not celebrate his birthday back in his village and waste millions of our taxpayers’ money as well.

Oli ba accuses the opposition, the press and the people for trying to defame his government. He tells us that we are blind and we don’t see the prosperity this government has brought but instead we spend our time whining and bitching about corruption and other nataks.

Oli ba needs to visit an ENT doctor as well as an ophthalmologist. Besides having problems with his hearing, his eyesight doesn’t seem to be that good either. Our government is not worried about all the corruption scandals the media reports about because it has the majority in the house. Our government doesn’t care about people because ordinary folks cannot pay crore of rupees in commissions to those in power. Our government is probably the most incompetent ever because Oli believes in zero tolerance when it comes to corruption but his courtiers are the most corrupt netas ever.

Yes, Oli is not a corrupt person. He will not take any ghoos and will not allow his courtiers to take chiya kharcha either. So, the question is, where did Gokul dai go wrong? Or is Oli ba just making fun of people with his jokes and one-liners but, deep inside, he is just another corrupt clown like the rest of them?

We expected a lot from our great communist government. We gave them the majority in hopes of a prosperous Nepal and, so far, only our netas and civil servants have fattened their wallets while we, the people, see our earnings being eaten up by inflation, taxes and chiya kharcha to our hakim sahebs.

Let us all wish our Oli ba a very happy Birthday. Instead of wasting millions of rupees on such birthday natak, our prime minister should have just asked the Yeti folks to organize a tea party at all of our wards across the country. They would have gladly funded the chiya kharcha after all. Let us wish Oli Ba a very Happy Birthday and may he live to be 100 so that he can also travel in our railroads, go on a cruise since will have our own ships and probably, by then, we will have gas lines connected to our homes. Happy Birthday, Mr Prime Minister. You have done us all proud and the birthday party was fabulous. Can we get a piece of the cake as well?

It need not be emphasized how inflation affects the general people. Prices of daily goods go up way too high.... Read More...

BIRGUNJ, Feb 4: Ministry of Federal Affairs and General Administration has issued a circular to all 753 local units across... Read More...

KATHMANDU, June 17: Despite government's claims of having cracked its whip at price rises, the country's inflation is hovering at double... Read More...