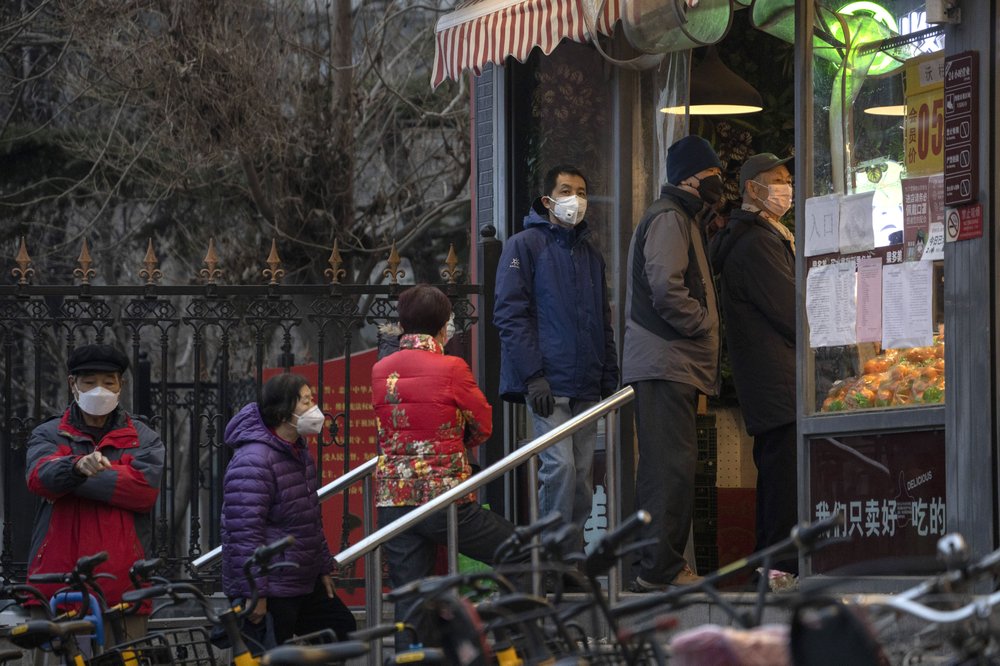 Residents wear masks and line up to enter a supermarket which is controlling the numbers of shoppers in Beijing, China on Tuesday, Feb. 25, 2020. The new virus took aim at a broadening swath of the globe Monday, with officials in Europe and the Middle East scrambling to limit the spread of an outbreak that showed signs of stabilizing at its Chinese epicenter but posed new threats far beyond. (AP Photo/Ng Han Guan)

BEIJING, China and South Korea on Tuesday reported more cases of a new viral illness that has been concentrated in North Asia but is creating worrisome, increasing clusters in the Middle East and Europe.

China reported 508 new cases and another 71 deaths, 68 of them in the central city of Wuhan, where the epidemic began in December. The updates bring mainland China’s totals to 77,658 cases and 2,663 deaths.

South Korea now has the second-most cases with 60 reported Tuesday morning, bringing its total to 893. South Korea has reported a near 15-fold increase in infections with the new coronavirus in a week, as health workers continue to find batches in the southeastern city of Daegu and nearby areas, where panic has brought towns to an eerie standstill.

Of the 60 new cases reported by South Korea’s Centers for Disease Control and Prevention, 49 came from Daegu and the surrounding areas of North Gyeongsang province.

The country also reported its eight fatality, a man in his 60s who was linked to a hospital in Cheongdo, where a slew of infections has been reported among patients at a mental ward.

South Korea’s cases now outnumber those reported by Japan, where the virus infected almost one-fifth of the passengers and crew on a cruise ship.

Clusters have also emerged in Iran and Italy, and there are concerns that the new outbreaks could signal a serious new stage in the global spread of the illness.

Schools were closed in Iran for a second day, and daily sanitizing of public buses and the Tehran metro, which is used by some 3 million people, was begun.

In several countries that reported their first cases on Monday — Iraq, Afghanistan, Kuwait, Bahrain and Oman, the infected patients had links with Iran. Iraq and Afghanistan closed their borders with Iran in an effort to stop the further spread.

In Italy, where 229 people have tested positive for the virus and seven have died, police manned checkpoints around a dozen quarantined northern towns as worries grew across the continent.

Austria temporarily halted rail traffic across its border with Italy. Slovenia and Croatia, popular getaways for Italians, were holding crisis meetings. Schools were closed, theater performances were canceled and even Carnival celebrations in Venice were called off.

It was a sign of how quickly circumstances could change in the widening COVID-19 scare. Italy had imposed more stringent measures than other European countries after the outbreak began, barring flights beginning Jan. 31 to and from China, Taiwan, Hong Kong and Macau.

“These rapid developments over the weekend have shown how quickly this situation can change,” the health commissioner for the European Union, Stella Kyriakides, said in Brussels. “We need to take this situation of course very seriously, but we must not give in to panic, and, even more importantly, to disinformation.”

After the large increases in COVID-19 cases were reported in other countries, the World Heath Organization said the virus had the potential to cause a pandemic, though it wasn’t one yet.

“The past few weeks has demonstrated just how quickly a new virus can spread around the world and cause widespread fear and disruption,” WHO’s Director-General Tedros Adhanom Ghebreyesus said.

But “for the moment we’re not witnessing the uncontained global spread of this virus,” he said.

In South Korea, the start of the new school year has been delayed, and President Moon Jae-in issued the country’s highest alert for infectious diseases.

People who recently visited Daegu and nearby areas were advised to stay at home if possible for two weeks. More than 600 police officers fanned out in Daegu in search of members of a church that has been identified as a source for hundreds of infections. The halls of the National Assembly were sterilized and crews in protective suits sprayed disinfectants at shops and food stalls in Seoul.

South Korea’s Defense Ministry has confirmed 13 troops have the virus, resulting in quarantines for many other troops and halting field training.

One killed, 14 injured in Dailekh bus accident
9 hours ago