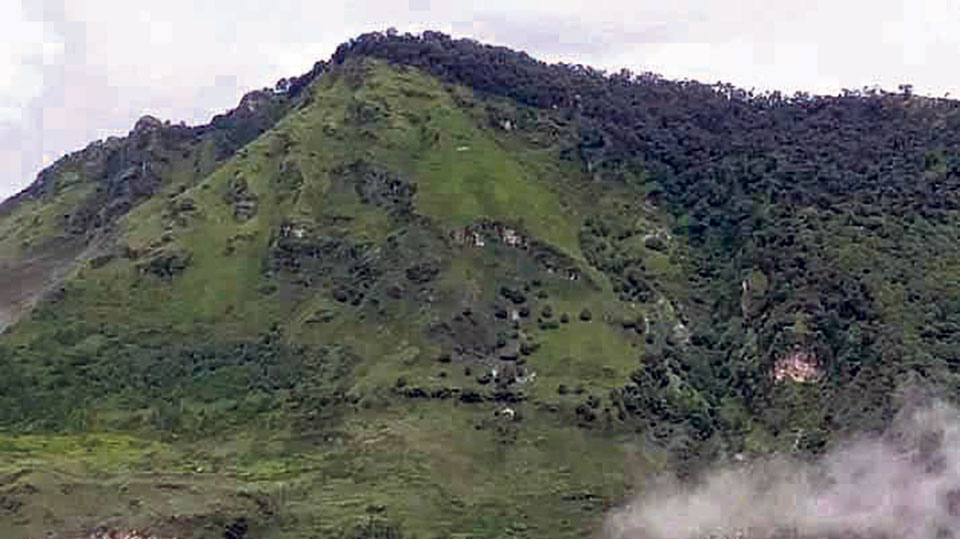 ROLPA, Feb 22: Locals have expressed deep concern over the likely operation of cement factories around the Mahabharata mountain range, arguing that "this will certainly have an irreparable environmental impact". In view of the ongoing environmental impact assessment by Samrat Cement Private Limited, they have taken to the street. They have warned of consequences if the factory is allowed to excavate the mountains, basically the Murrule highland. The highland situated at an altitude of 2,153 meters near Holeri is considered precious from both environmental and cultural points of view.

"The factory has taken the local authorities into confidence to carry out the illegal activities," said Keshab Raj Chand, a campaigner associated with 'Murrule Bachau Abhiyan' (Save Murrule campaign).  "We are very much worried about the future of this place," he added.

Locals are of the view that the Murrule highland and the surrounding areas should be saved at any cost. The forests and the pasturelands cannot be used by cement factories, they warn. Locals of Runtigadhi Rural Municipality have submitted a memorandum regarding this to the District Administrative Office, Department of Mines and Geology, District Forest Office, tourism ministry and the environment ministry, among other bodies.

"If at all mountains are excavated at the Murrule highland, over 1,000 households will be directly affected. The water sources around are sure to dry up. This area is also the area of vultures. With the arrival of cement factories, the vultures will disappear. We cannot even think of the long-term consequences of the environmental degradation once factories are run over here," Chand noted.

Locals feel that a huge part of arable land in the district will turn into a desert if industries are allowed to tamper with the tall mountains in the region. And this will affect the economy of commoners, they warn.

Runtigadhi Rural Municipality is also against welcoming any factory in the mountain areas. The cement factory has however already bought land in the mountain and jungle areas, leaving people anxious. According to Balaram Budha, chairperson of Runtigadhi Rural Municipality, it will not allow any kind of factories to operate in the area. "It is very insensitive to excavate the mountains for cement. People are attached to the mountains, not just because it is revered but also because it is the beauty of the place and a major tourist puller," he said. "We cannot allow anyone to damage Murrule and the areas around," he added. He stated that Holeri should be considered and treated as the asset of the entire nation rather than that of Rolpa alone.

Sonapur Cement Private Limited has however been operating near Holeri, at Dhaulabang. Dozens of tipper trucks are seen carrying aggregates from here round the clock. Locals here have also long complained of the rapid environmental damage.

According to the existing provisions, factories have to mitigate and compensate the damage done to the environment by planting trees. However, due to the lack of strict follow up by the authorities, factories hardly fulfill this responsibly.

"Factories should compulsorily plant trees, but that is indeed not seen being done. They enjoy their right to excavate, but when it comes to their responsibility to the environment, the same loyalty is not seen," said Dadhi Kandel, chief of Division Forest Office, Rolpa.

Sonapur cement was collecting aggregates from its private land earlier. Now it has been using forests randomly for the collection of raw materials.

The quest for economic development and materialism has been almost like Faustian saga in the modern times. As the learned... Read More...

Kathmandu isn’t dirty, we are!

If you think Kathmandu is dirty, you should blame yourself. After all, it’s us who are responsible for the filthy... Read More...