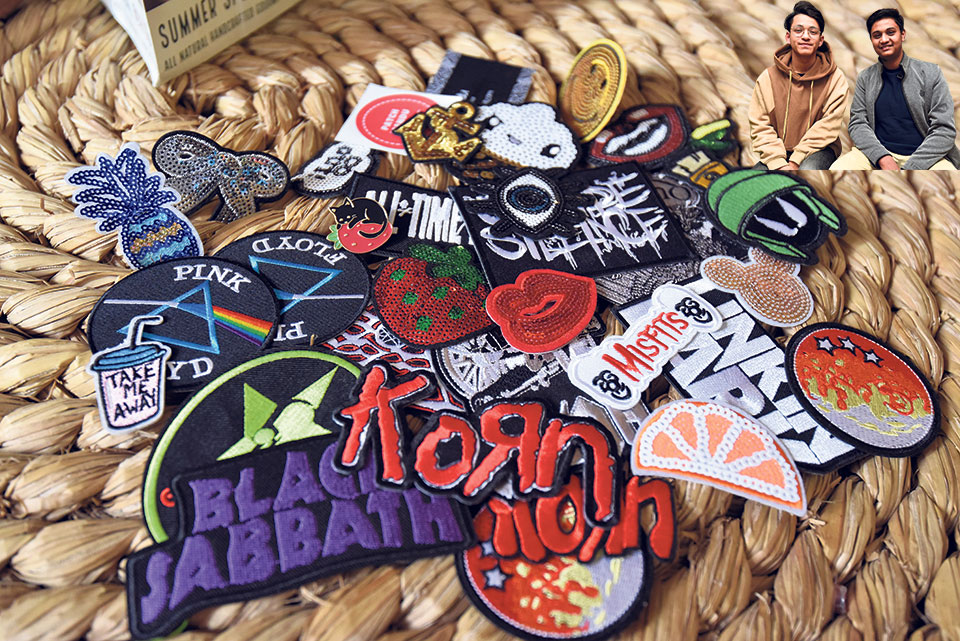 Patchwork—something we overlook, something we see as a flaw in our clothes, in the products we buy, something we wish wasn’t there to ruin a perfectly good thing. With brand names embroidered into every casual t-shirt and the likes and leaving unwanted holes when you try to remove them, it’s understandable why we have never seen their worth.

But Aditya Singhal and Alok Shakya are here to change that.

Officially established on June 11, 2019, the partners’ online shop Patchmandu aims to bring patch culture into the country with the hope that it gets the acceptance it deserves. “Patching might not be a trendy thing in Nepal right now. But we can see that changing in the coming days,” says Shakya.

Today’s youths are extremely invested in universal pop culture and all its subtle nuances. You can see the entertainment industry taking over people’s lives. With anime markets inaugurated in the most popular hubs to collaborations like Marvel and Miniso entering the valley, it’s only a few years before pop culture becomes one of the most dominant markets among youths in the country.

And those youths are exactly who Patchmandu cater to the most. “Quite a lot of our customers are between the ages of 15 to 25. They usually come to us to customize patches based on their favorite TV show, movies or animes. When you have these patches attached to your accessories like bags, clothes or shoes, it sheds light on who you are. It shows little pieces of your identity, letting others see bits of your life without conversational exchange,” says Shakya.

The duo confess that the idea came about quite organically and that they didn’t brainstorm over what would work best in the market. Singhal and Shakya met through a common friend but got to know each other much better through their shared interest in gaming.

Singhal had always wanted to start his own business. The idea started with the notion of selling keyrings in the beginning. He was out and about, asking everyone he knew on how to start a business that’s both unique, profitable, and would feed his passion. It was during one of his conversations with Shakya that they came up with the idea of embroidered patches.

At first, Singhal was hesitant. And understandably so. After all, it wasn’t something that was popular. But after hearing Shakya’s points on the evolving youth culture and how helpful it could be, Singhal was on board. And thus, the duo started their journey.

“Patches add small details in your overall look. It’s not just about appearance or looking good or making a statement. It’s also about carrying something you love with you. Whether it be your favorite tv show, or a small symbol of hope, patches have meaning that go far beyond brand names and aesthetics,” says Singhal.

Patches might be available in the local market, but it’s rare to find things that actually mean something to you. “Which is why we have given people an open door. We customize. And our customers can have the exact final product that they wished for. We never compromise on their needs or our quality,” says Shakya.

Their first sale was a logo of Southside Serpent patch from the popular TV show ‘Riverdale’. Among their bestselling patches are Baby Groot from Marvel Cinematic Universe and characters from the animated show Rick and Morty. These patches can be applied on any cloth surface like shoes, bags, jackets—basically anything that a hot iron cannot damage.

Patchmandu’s biggest focus is on making patches, but they also don’t shy away from experimenting with other materials. For instance, they have also ventured towards making pins and brooches. However, for this, they have limited pre-made designs and they aren’t open to customization just yet. Where metallic pins are concerned, Rick and Morty, Spongebob and a few other designs are available at the moment.

As adventurous and enjoyable this journey has been, it has also arrived with its fair share of struggles. The biggest one for Singhal and Shakya was finding out that good quality embroideries could not be done in Nepal. Due to this, they had to opt for importing materials for the job. This invited another whole batch of problems. Sometimes, the delivery comes too late. And worse, sometimes, they get lost.

Adding on, with so many businesses moving to the online platform, it’s hard to get the recognition one deserves. Even when you’re bringing something new and interesting to the table, it’s difficult to get people’s attention and there is a lot of competition as well.

And yet, even with all these hurdles on their way, the duo is determined to take their venture forward and do what it takes to make Patchmandu a household name.

LONDON, May 23: People using e-cigarettes to quit smoking are about 95% more likely to report success than those trying... Read More...