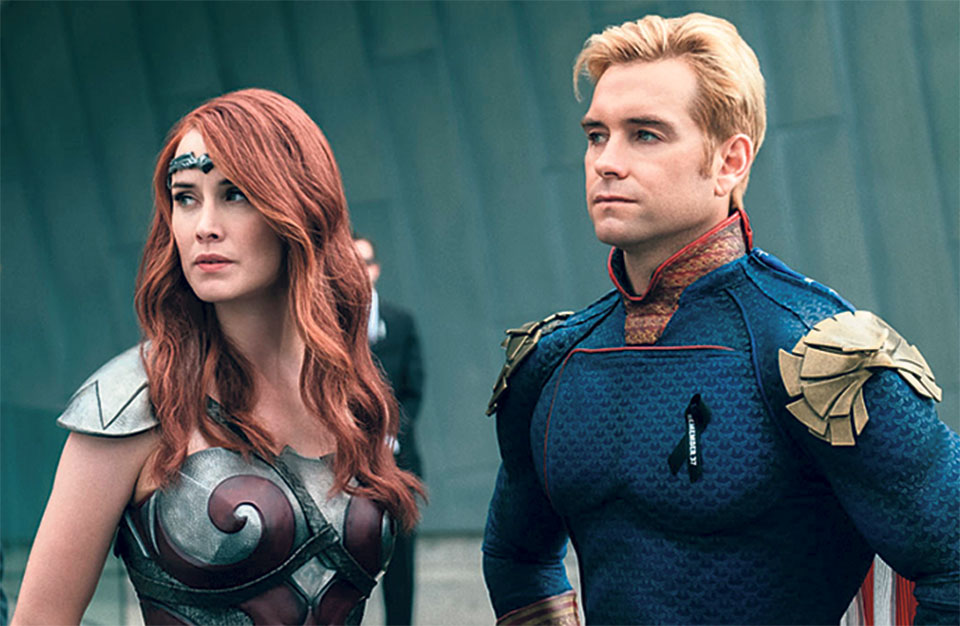 The Boys is one of those series that had a perfect timing. Arriving just when we were getting off the high of End Game and the dark reality of Joker, it first sounded interesting and entertaining. Some warned me of its dark humor. But accustomed to shows like Black Mirror and Rick and Morty, I thought I was prepared.

Boy, was I surprised.
Imagine if Justice League actually existed. Imagine they were owned by a massive corporate entity aiming for nothing but exponential profit. Cue in marketing departments, merchandising contracts, advertisements, manipulation of public perception. Nothing bad can befall on these stainless illusions of perfection and they will go to any lengths to maintain that façade.

In this scenario, arrives a naïve, innocent girl, Annie, hoping to be a part of ‘The Seven’—the biggest superheroes in the country—and save the world.

We have another character, Hughie, whose girlfriend was accidentally murdered by A-Train, a superhero eerily resembling The Flash. Hughie is then approached by another morally ambiguous character, Butcher, who promises payback for all the wrongs these heroes have done. Joining them in this anti-superhero crusade is an unlikely criminal and a prison officer. And thus form ‘The Boys’. The chemistry between these four characters is one of the best aspects of the show.

What we see with these four are long, often hilarious, sequences of chaos unraveling one by one. How are a couple of typical misfits going to beat a corporate that’s larger than life? This is the main concept of the show.

There are multiple plotlines that follow different characters—A-Train being only one of them. There’s a Wonder Woman lookalike, Queen Maeve, and The Deep who is a douche-y caricature of Aquaman.

But the best, perhaps the most impressionable character, is Homelander. With the American flag in his cape, laser eyes and blue costume, this one is a creepy blend of Captain America and Superman. Suffice to say, adopting traits from two of the most righteous characters in comic book history makes Homelander an intriguing character. But the show makes him frightening, intimidating, manipulative and unpredictable.

And that’s another really good thing about The Boys.

It doesn’t filter out things that might make the audience uncomfortable. No, it revels in it. It plants seeds of suspicions in the first episode; just giving a vague idea that the story might not follow traditional way of things. As watchers, there is a certain anxiety—but not one of us expects the worst. Not when it comes to our glorious superheroes. No way.

And then story hits you in the face. That seed is now a giant, ugly tree casting shadows over everything you’ve come to love in the last two decades.

But let me tell you one thing. There has been nothing quite like The Boys before. It’s not that other shows haven’t tried bringing a twist into the superhero genre. But this one’s different. Rather than detailed action sequences and overwhelming, gritty violence—not that there aren’t any—The Boys is grounded in reality. It depicts these godly entities in human spotlight. They have flaws and that’s understandable. But there is a dark superiority among those flaws, a narcissistic complex that does more harm than good.

Disheartening would be the word that would describe my feelings with this show. People who were lucky—in this case, unlucky—enough to have something special only to be helplessly thwarted into capitalist politics and celeb status—it’s quite sad to witness.

And yet, The Boys isn’t just a parody of our generation’s unbending superhero worship.  With all its ongoing plotlines, it manages to weave in concepts of celebrity endorsements, profiting off of tragedies, false advertisement, politics, childhood trauma, child endangerment and the darkness that resides in every human, superpowers or not.

It also gives a meaningful look into the backstage of things. Onstage, everything looks magical. The audiences are enthralled. But you take a peek behind the curtain and it’s chaos.

The other thing the show touches on is how we, as humans, prefer illusion over reality no matter what. Even when evidences come up that something harrowing is going on backstage, we’d rather stay glued to our seats and wait for it to be over.

Another thing I really enjoyed is the dynamics between Butcher and Homelander. Even though they are the leaders of two opposing forces, there is an undeniable similarity between the them. And at the top of the list is their inexplicable penchant towards violence.

Moving on to the negatives, I have to admit that the two main characters we are supposed to root for—Annie and Hughie—are too bland. Their romance fell flat and was completely unnecessary. The story would have progressed much better, and realistically, if their relationship had been platonic. I didn’t care for them much.

While this show had an interesting concept, there were scenes that dragged on. It’s not always fast paced which was fine for me as I don’t mind fillers as long as they’re entertaining. But some of the fillers dumped between episodes weren’t so at all.

Despite these flaws, I highly recommend the show to anyone interested in the Marvel and DC universe. There are undeniable parallels between iconic characters and people in the show. So much so that I don’t know how they managed to not get sued. It’s definitely worth watching.

Fleabag is witty and relatable, albeit bit depressing

Deciding to watch a series requires a serious investment of time. You have to wait for episodes to show up... Read More...

KINGSTON, July 7: An unbeaten century from captain Virat Kohli and a half-century by Dinesh Karthik steered India to a... Read More...