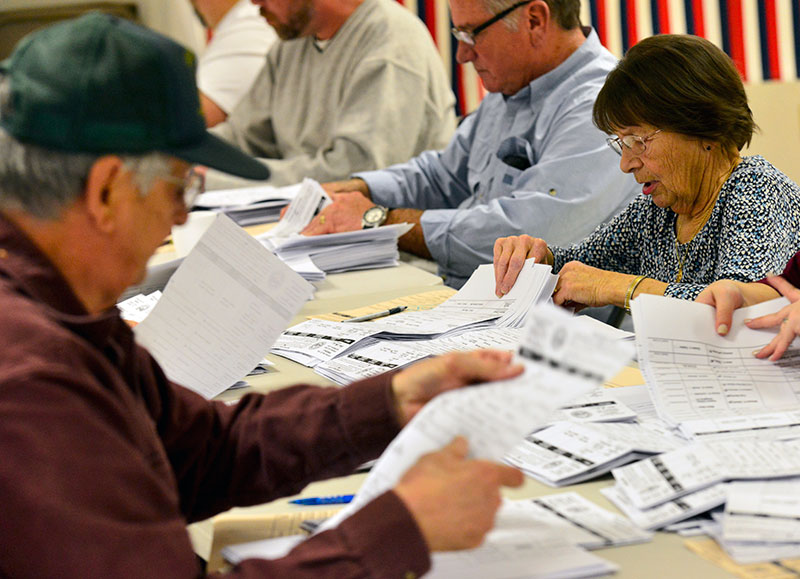 Ballot counters at the Hinsdale, N.H., polling station hand count each of the 1799 ballots that were cast in its precinct after the polls closed on Tuesday, Nov. 8, 2016. (AP)

WASHINGTON, Nov 9:  Donald Trump moved within reach of the White House Tuesday night, capturing crucial victories over Hillary Clinton in Florida, Ohio and North Carolina, a remarkable show of strength in an unexpectedly tight race for the presidency.

Trump also battled for a breakthrough in the upper Midwest, a region that reliably backed Democrats in presidential elections for three decades. His victories left Clinton with a perilously narrow path and no margin for error in battleground states where votes were still being counted.

As the race lurched past midnight, neither candidate had cleared the 270 Electoral College votes needed to win the White House. Trump stood at 244 to Clinton's 215.

The uncertainty sent Dow Jones futures and Asian markets tumbling, reflecting investor alarm over what a Trump presidency might mean for the economy and global trade.

As Clinton's team anxiously waited for results to roll in, the candidate tweeted to supporters, "Whatever happens tonight, thank you for everything."

Clinton, a fixture in American politics for decades, was hoping to become the first woman to serve as commander in chief. Her race against Trump, a celebrity businessman with no political experience, was among the nastiest in recent memory, exposing and deepening the nation's economic and racial divides.

Exit polls underscored the deep divisions that have defined the 2016 contest. Women nationwide supported Clinton by a double-digit margin, while men were significantly more likely to back Trump. More than half of white voters backed the Republican, while nearly 9 in 10 blacks and two-thirds of Hispanics voted for the Democrat.

If Trump pulls off the stunning upset, he could well find himself governing with a Congress fully under Republican control. Democrats' path to retaking the Senate majority narrowed as the GOP held onto key seats in North Carolina, Indiana and Florida. Republicans also extended their grip on the House.

Democrats, as well as some Republicans, expected Trump's unconventional candidacy would damage down-ballot races and even flip some reliably red states in the presidential race. But Trump held on to Republican territory, including in Georgia and Utah, where Clinton's campaign confidently invested resources.

Clinton carried Virginia, Nevada and Colorado. Her fate hinged in part on wins in Michigan and Wisconsin, states where her campaign spent little time during the general election in anticipation of comfortable victories.

The 45th president will inherit an anxious nation, deeply divided by economic and educational opportunities, race and culture. The economy has rebounded from the depths of recession, though many Americans have yet to benefit. New terror threats from home and abroad have raised security fears.

Clinton asked voters to keep the White House in her party's hands for a third straight term. She cast herself as heir to President Barack Obama's legacy and pledged to make good on his unfinished agenda, including passing immigration legislation, tightening restrictions on guns and tweaking his signature health care law.

But she struggled throughout the race with persistent questions about her honesty and trustworthiness. Those troubles flared anew late in the race, when FBI Director James Comey announced a review of new emails from her tenure at the State Department. On Sunday, just two days before Election Day, Comey said there was nothing in the material to warrant criminal charges against Clinton.

Trump, the New York real estate developer who lives in a gold-plated Manhattan penthouse, forged a striking connection with white, working-class Americans who feel left behind in the changing economy and diversifying country. He cast immigration, both from Latin America and the Middle East, as the root of many problems plaguing the nation and called for building a wall along the U.S.-Mexico border.

"I see so many hopes and so many dreams out there that didn't happen, that could have happened, with leadership, with proper leadership," he said by telephone on Fox News before casting his own ballot in Manhattan. "And people are hurt so badly."

Seven in 10 Americans who went to the polls Tuesday said immigrants now in the country illegally should be allowed to stay, while just a quarter said they should be deported. More than half oppose building a border wall, according to the exit polls, which were conducted for The Associated Press and television networks by Edison Research.

The Republican Party's tortured relationship with its nominee was evident right up to the end. Former President George W. Bush and wife Laura Bush declined to back Trump, instead selecting "none of the above" when they voted for president, according to spokesman Freddy Ford.

Trump set both parties on edge when he refused to say in the third and final debate whether he would accept the election's results, citing with no evidence the possibility of a rigged outcome. His statement threatened to undermine a fundamental pillar of American democracy and raised the prospect that his fervent supporters would not view Clinton as a legitimate president if she won.

Asked Tuesday in an interview with Fox News if he would accept the election results, Trump continued to demur, saying "We're going to see how things play out."

Most problems that did pop up at polling places Tuesday appeared to be routine — the kinds of snags that come every four years, including long lines, machines not working properly and issues with ballots or voter rolls.

Even before Tuesday, almost 45 million people had cast ballots for president. Many expressed relief the end was in sight after an election season in which personal attacks often drowned out the issues.

Clinton has denounced Trump for calling Mexican immigrants "rapists" and promoting a ban on Muslims entering the U.S., and for his long line of remarks about women that culminated in an audio in which he bragged about grabbing their genitals. Her campaign was hoping high turnout among Hispanics push her over the top in states like Florida and Nevada.

"I grew up in a Hispanic family, and the way that Donald Trump has referred to illegal immigrants — being from illegal immigrants, I took that to heart," said Angel Salazar, a 22-year-old sanitation associate from Oklahoma City. "I don't like anything that he said. I don't like his views. So I voted for Hillary Clinton because she supports us."

KATHMANDU, Sept 16: Lawmakers of the main opposition party Nepali Congress are currently obstructing the proceeding in the House of... Read More...

Digitization for agriculture revolution
19 hours ago