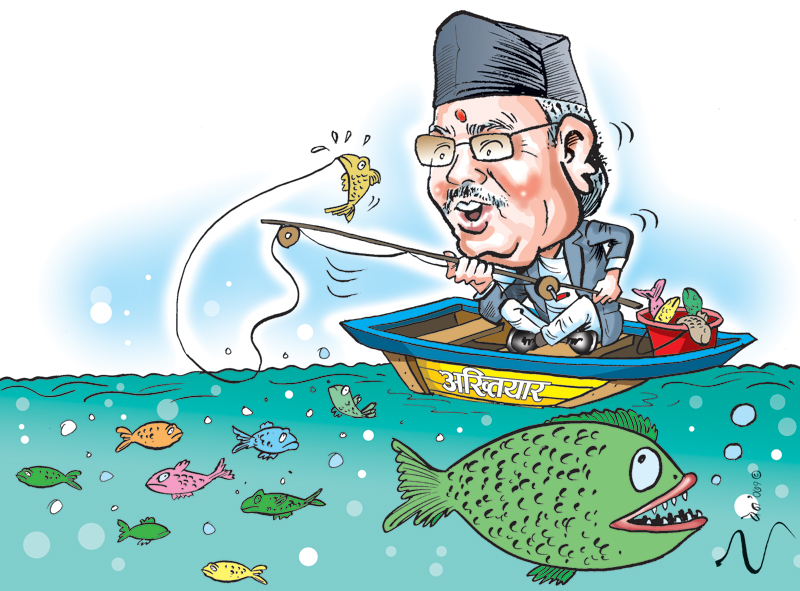 Impeachment of CIAA chief would be an important symbolic step, but it must not be used to hide or side-step widespread systemic impunity in Nepal’s body politic
Nepal has seen many revolutions, agitations, armed insurgencies and peaceful people’s movements in the recent decades. These have led to changes in political systems; generally brought about greater freedom; increased awareness of people’s human rights; and some progress in human development indicators, such as in health and education. Sadly, what they have failed to do is to institutionalize good governance, rule of law and political stability that are preconditions for sustained economic growth and social progress.

Nepal suffers from an obsession with politics and neglect of the economy; regurgitation of outdated ideological slogans and refusal to learn from practical success stories of other countries; blaming others rather than taking responsibility; and more recently, identity politics with exaggerated emphasis on what divides us rather than what unites us all as Nepalis.

‘People Power’ movements
From time to time, we have seen bursts of “people power” movements that have brought down strong-men with self-righteous hubris who sought to impose their brand of tyranny.

The spontaneous outpouring of millions of people on the streets to end King Gyanendra’s authoritarian rule in April 2006 was a shining example of “people power”. The large civic rally at Basantpur Square in Kathmandu in May 2011 that led to the collapse of the Maoist “indefinite strike” aimed at state capture, was another successful manifestation of “people power”.

The latest case of “people power”—still incomplete, but possibly on the verge of success—is the 2016 popular movement against a tyrannical Chief of the Commission on Investigation of the Abuse of Authority (CIAA) who blatantly abused his authority to intimidate his critics; paralyzed the normal functioning of government services; and instituted a virtual parallel state power structure centered around himself and his corrupt cronies.

In each of the above cases, the impetus and leadership of “people power” came not from Nepal’s many fractious political parties, but from an unlikely and initially unorganized group of daring civic leaders and citizen activists. The movement against the CIAA Chief was triggered by the witch-hunt he unleashed against prominent lawyer Shambhu Thapa and journalist Kanak Mani Dixit who, along with many other citizens such as consumer rights activist Jyoti Bania, had opposed the initial appointment of this convicted crook as a case of the fox guarding the chicken coop.

The movement picked up momentum when a Gandhi-like physician Dr Govinda KC accused, with credible evidence, the CIAA chief as the principal protector and perpetrator of rampant corruption and malpractices in medical schools threatening the nation’s public health.

Judiciary to the rescue
As the executive and legislative branches of the government failed to act in the public interest, and even Nepal’s otherwise free and vibrant media resorted to “self-censorship”, some brave activists turned to the judiciary to restrain the unbridled power of the most corrupt anti-corruption chief in Nepal’s history. Against great odds, a little-known but tenacious and principled young lawyer, Om Aryal, appealed to Nepal’s Supreme Court to invalidate the wrongful appointment of the CIAA chief.

To her credit, Nepal’s first female Chief Justice, Sushila Karki, rose to the occasion, and the Supreme Court issued several verdicts against the rogue counter-corruption chief’s corrupt, illegal and anti-constitutional acts. A tiny youth-led “Bibeksheel Party” joined by many concerned and outraged citizens spearheaded an “enough is enough” campaign against impunity.

As the young Nepali Congress leader Gagan Thapa aptly noted, the tactics of Lokman Singh Karki were similar to those of J Edgar Hoover, the notorious Director of the US Federal Bureau of Intelligence (FBI) for 37 years from 1935 to 1972. Like Hoover, and his contemporaries in the German Gestapo and Stasi, the Soviet KGB and Romanian Securitate, Karki used the CIAA to conduct illegal surveillance and collect secret files on political and civic leaders, bureaucrats, journalists, businessmen and anyone else who had or might question his abuse of authority. Perhaps worse than those global super spooks, Karki and his cronies are known to extort huge sums of “protection money” from their victims.

Karki exceeded his authority to commandeer state institutions such as the Nepal Police, intelligence services and tax authorities to blackmail his critics, opponents, and those who did not comply with his wishes and demands. He put the political party leaders, who cynically put him in power in the first place in 2013, on a short leash with threats of starting investigation against their corrupt practices if they did not do his bidding. In a shrewd and unethical manner, he was able to create a myth of corruption even against bureaucrats and politicians with a reputation for integrity.

Karki picked and chose whom to punish and whom to exonerate—protecting many “Big Fish” who colluded with him, while terrorizing helpless “little fish” and those who resisted, with the vengeance of a mafia boss.

Virtually all the top leaders of major national parties have been shamefully complicit in Karki’s abuse of authority. Even more shocking and sad is the widely reported collusion in this affair of Nepal’s closest and most important neighbor, India. Whether acting on New Delhi’s behest or independently, Indian operatives are known to have played a key—perhaps even decisive role—in Karki’s initial appointment in 2013. Some even argue that Karki’s appointment was part of a “package deal” with that of the former Chief Justice Khila Raj Regmi as interim Prime Minister.

India unbound
At first, all of this may sound like a hyped-up “conspiracy theory” to blame India in this grotesque case. But enough first-hand and circumstantial evidence has been cited to corroborate India’s hidden hand in promoting and protecting this tainted man. Examples cited include the overwhelming pressure piled on the then President of Nepal to approve Karki’s appointment against despite assurances he had given to many civic and political delegations. Another case in point was the prompt and direct delivery of a fleet of vehicles to the new CIAA Chief by India, without going through normal government channels and processes. Whatever the reality, the widely held public perception is that, Indian support greatly emboldened Karki to act in a fearlessly arbitrary manner.

Many genuine Nepali friends of India find themselves puzzled and disappointed that a great democratic country with ambitions of regional and global leadership should be involved in such petty and unprincipled micro-management in a close neighbor’s domestic affairs. But long-time watchers of India-Nepal relations vouch that unfortunately, this is not an exceptional case but part of a pattern of India’s short-sighted policy towards its immediate neighbors. In Nepal’s case, a recent reminder was the five-month long border blockade of 2015-2016 enforced by some dissident Nepali political parties with de facto support of New Delhi. That blockade remains a stain in the Nepal-India relationship as it brought great hardship to the Nepali people as they were struggling to recuperate from a devastating earthquake.

After much prevarication, and just before the Dashain holidays, two major political parties—the UML and the Maoist Centre—mustered the courage to file a motion in the parliament to impeach the dreaded CIAA chief. But the country’s largest political party, the Nepali Congress, is shamelessly dithering whether to support, oppose or otherwise scuttle the motion, citing minor procedural matters to obfuscate a major governance scandal.

It is clear that the political parties filed the motion of impeachment not out of their deep conviction to weed out corruption and abuse of authority, but as a pre-emptive strike against the dreaded counter-corruption chief, who was apparently planning to turn against top political leaders with corruption cases, if they wavered in supporting him. Among other cases, the massive fraud by the Maoist leadership in the name of their own ex-combatants in cantonments, and the scandals involving the UML in the management of private medical colleges, have been the hottest topics triggering public revulsion and cynicism.

Packaging impunity
Impeachment of the CIAA chief would be an important symbolic step, but it must not be used to hide or side-step widespread systemic impunity in Nepal’s body politic, including that practiced by the political parties operating as self-serving syndicates. Nepal’s top political party bosses are once again conniving to obfuscate the issue of impunity by linking the support for the impeachment case as part of a “package deal” with other pending issues of constitutional amendments and holding of national, provincial, and especially local elections that have not been held for nearly two decades.

Each one of these issues has its own merit, but linking them as part of a “package deal” is bound to prolong Nepal’s endless political transition that is grossly undermining its economic development and social progress. International friends of Nepal, including India, and the donor community, should encourage Nepali leaders to find a quicker solution to their political bickering and shift their focus to accelerating reconstruction and development efforts.

Continued vigilance and activism by citizens is needed to guard against further shenanigans by political parties to prolong their rule by collusion in the name of “consensus” and “package deals”. Democracy is imperfect, but there is no substitute for allowing it to function by holding early and periodic elections, and letting the people decide their own fate and that of those who claim or aspire to be their leaders.

The author is a former Assistant Secretary-General of the United Nations, Deputy Executive Director of UNICEF and author of Lost In Transition: Rebuilding Nepal from the Maoist mayhem and mega earthquake (2015)

KATHMANDU, Oct 20: The main opposition CPN-UML today has informed its lawmakers about importance and meaning of the impeachment motion... Read More...