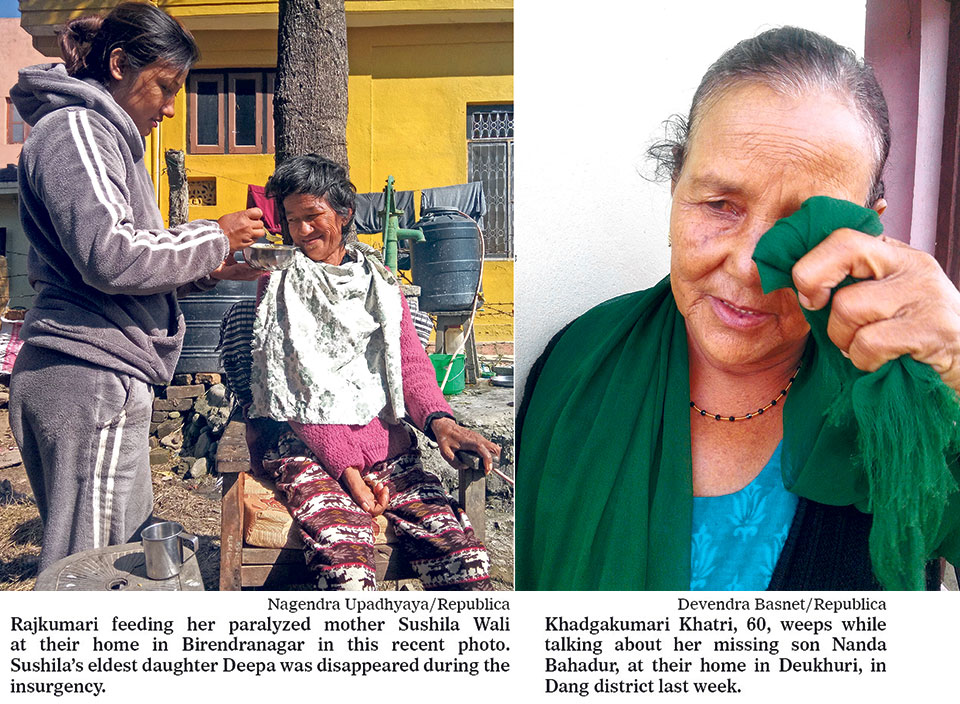 The Maoists launched an armed insurgency against the state in 1996 and the conflict ravaged the country for a decade. On November 21, 2006, the insurgents and the government signed a comprehensive peace accord. Those who bore the brunt of the carnage were promised justice and all possible support for a dignified life. However, for some affected families, the wounds continue to fester. Republica cites some cases of individuals who continue to struggle and suffer the bleak aftermath.

SURKHET/DANG, Feb 13: “Mother, if you don’t come and save me right away, you won’t be able to see me ever again. I am in the claws of a tiger; it will devour me mercilessly.”

This is an excerpt from a letter written by 14-year-old Deepa Wali when she was being held captive at the Nepal Army barracks at Chhinchu 16 years ago. The letter dated August 8, 2003 landed in her mother’s hands nearly three months later. Deepa was studying in 8th grade then and had become freshly associated with the Maoists.

“We tried our best to free her from captivity. But nothing worked. It’s been 16 years and we still don’t know what happened of her,” Deepa’s mother Sushila told Republica four years ago. “We don’t know whether she is still alive or died long ago,” she lamented.

In 2006, the Maoists joined peaceful politics and justice was promised for those who suffered in the conflict.

Since then, Sushila has taken part in a number of functions for justice for herself and many others like her. In the meantime, she lost her husband. He was equally traumatized by their daughter’s unknown fate. He died of cardiac arrest.

Sushila has been paralyzed for the past three years. She can neither move about by herself nor speak. She needs help for her daily routine. Whenever they talk about her lost daughter, she can only shed tears. She looks at Deepa’s letter and her photo with a blank expression on her face.

“My mother clings to her hope and faith that Deepa will come back someday. Every day she looks at the letter and photo through moist eyes,” said Rajkumari, Sushila’s youngest daughter and her only caretaker.

The Wali family lives in a small hut in Birendranagar, Surkhet. Sushila’s mobility is confined to that tiny structure. Before being struck down by paralysis, she was an active president of the ‘Justice for Conflict Victims Society, Surkhet’.

The family has no source of income. Rajkumari hardly has time for anything other than look after her mother. “We have been surviving so far on people’s charity. We barely manage. I am not free to work outside,” she said.

Sushila’s medical needs are huge. But there is no money, and therefore no medication. Whatever the government gave to the families of the disappeared did not last long. “We paid the medical costs. We needed over

Rs 500,000 during our two months’ stay in Kathmandu for the treatment of her paralysis,” said Rajkumari.

The days ahead don’t look any less bleak.

Khadgakumari Khatri is 60 and lives all alone in a small house in Deukhuri. It has been 18 years since she last saw her son Nanda Bahadur. He was studying in 12th grade in Kathmandu and used to talk of pursuing higher education. Meanwhile, he had some health issues and went to Lucknow, India for treatment. After treatment, he was heading back home, but he never reached there. The police had taken him.

According to Khadgakumari, the Maoists used to force her son to write their banners. If he did not do as he was told, they would threaten to kill him. So he had to work for the rebels at times. This meant he was enemy for the police and the army.

“My son was never interested in politics, but he had to write out banners for the Maoists under duress. Because of this, the police took him away,” Khadgakumari added. “In brief calls over the phone he said he was in the clutches of the police; I couldn’t talk to him too often,” she added.

As the mother heard about it, her son was returning home when he was stopped by some Maoists, and they made him write some banners. He was caught red-handed by the police. It was on February 22, 2002. “This is what some Maoists cadres told me later. My son was taken away though he was innocent,” she lamented.

Khadgakumari went hither and thither to meet her son. She met him twice at Tulasipur police station. The third time she went, her son was no longer there. “The police told me that he had been released already,” she said. But he was nowhere to be found.

Khadgakumari does not know whether he is still alive or dead and she is too frail to even speak up for justice. “I filed a complaint, but they have no clue about my son,” she said.

Although the insurgency era victims have pinned their hopes of justice on the Truth and Reconciliation Commission, most of them have been left utterly disappointed. According to former member of the commission Bijul Bishwakarma, the government has not been able to give the commission any real teeth.

Around 17,000 people are believed to have lost their lives during the Maoist armed insurgency and hundreds more were disappeared.

When the terms of transitional justice bodies—Truth and Reconciliation Commission (TRC) and Commission of Investigation on Enforced Disappeared Persons (CIEDP)—came... Read More...

Conflict victims say they received neither justice nor reparations

ROLPA, March 3: Even though it has been more than 12 years since the decade-long Maoist conflict ended, the conflict-era victims... Read More...

Udayapurgadhi getting restored to its former glory
6 minutes ago