Stocks up a fraction in the first week of February 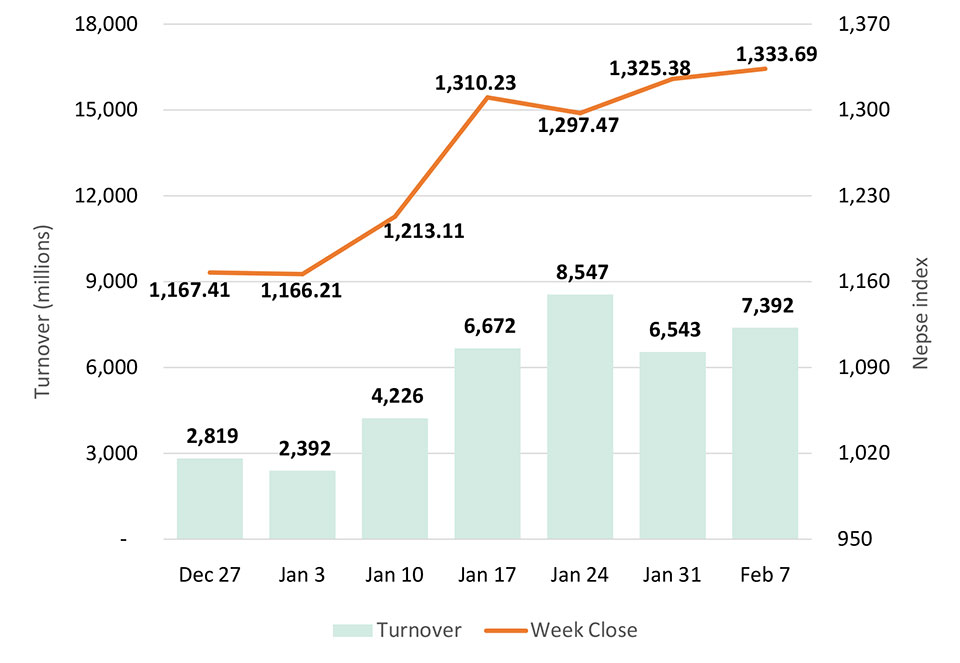 KATHMANDU: The Nepal Stock Exchange (Nepse) index opened the week on an upbeat note. The index rallied over 21 points on Sunday and stretched its gains to Monday adding another 2.5 points on the run. Subsequently, some selling pressure was witnessed in mid-week after the market traded at around 1,350 points pulling the major average down by 12 points on Tuesday. While the index rose more than 5 points on Wednesday, Thursday was marked by a loss of roughly 9 points. Eventually the index, closed the volatile week at 1,333.69 points registering a gain of 8.31 points or 0.63%.

The local bourse extended its gains for a second straight week but the momentum is relatively subdued compared to the rallies seen in early January. The major surge which started in the month of December and lasted for over 2 months has baffled the investors of late. With heavy volumes traded within market's confined range suggests indecisiveness prevailing in the equity market. On a positive note, record turnovers indicate the selling pressure being absorbed by the buyers preventing any major correction. Overall the outlook for the market seems bullish for the long run with possible minor retracements. Over Rs 7 billion worth of scrips changed hands in the week.

Sensitive Index, which gauges the performance of class 'A' stocks, also mirrored Nepse's movement. The index added 0.81%. In terms of sector wise performance, most of the segments saw strength, while a few turned red. Development Bank sector saw the highest weekly gain of 2.79%. Non-Life Insurance, Trading and Hydropower sub-indices also rose over 2% each. Similarly, 'Others', Finance, Manufacturing & Processing and Banking sub-indices closed the week higher. On the other hand, Hotels segment suffered as its sub-index tumbled 2.7%. Sub-index of Mutual Fund group fell 1.58%, while those of Microfinance and Life Insurance sub-indices dropped 0.9% and 0.77%, respectively.

On Friday, Century Commercial Bank Ltd declared its dividend for the year 2019/20. The bank has proposed 2% stock dividend and 4.75% cash dividend to its shareholders. The decision is subject to approval from the bank's annual general meeting (AGM). In other news, Nepal Investment Bank Ltd published its second quarter earnings. As per the report, the bank's net profit took a significant hit following a decline in its net interest income and a notable rise in impairment charge. Its net profit fell by over 15% year-on-year to Rs 1.67 billion.

On the technical front, the index formed a small bullish candlestick on the weekly timeframe with a long upper wick. Despite the gain, the index saw some pressure towards the latter half of the week. In the meantime, the market resisted for a second time from around 1,350 points mark which can be taken as a major hurdle for the Nepse index on its way upward. Its breach might see another major bullish move. On the other hand, a correction can see the index tumble as low as 1,280 points where a rebound can be taken as a buying opportunity in the equity market.

KATHMANDU: Nepali stocks saw one of its best weeks as the Nepal Stock Exchange (Nepse) index closed in green in... Read More...

KATHMANDU: Stocks opened on a positive note on Tuesday as the major average saw a steady rise in the first... Read More...

KATHMANDU: Following some of the least volatile week, the major benchmark ended roughly where it started. The Nepal Stock Exchange... Read More...

Man beaten to death in Dhanusha
49 minutes ago