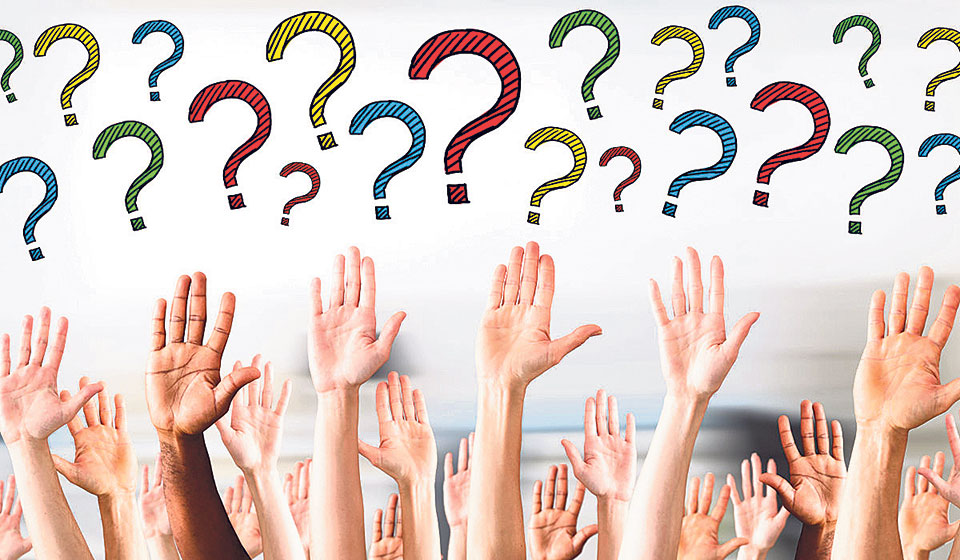 Raising question is a fundamental right of the people. Let’s not hesitate to question if any actions of the government impact our life and liberty

Dilip Mahato was crushed to death by a tipper truck in Dhanusha recently. Mahato was an environmental activist and was protesting against the haphazard extraction of sand and stones from the streams and river basins in his district and beyond. He faced the wrath of the illegal mine extractors and faced the consequences with life. Similarly, in another case Pranesh Gautam was arrested for posting a satirical film review on YouTube in June last year.  In October last year, singer Durgesh Thapa and Samir Ghising were also taken into custody by the police claiming that their creations promoted anti-social values. Apparently, there was no civic voice heard in the street against this.

Several cases of corruption, mismanagement and misuse of public resources have been reported on a daily basis. On the other hand, the government is trying to introduce several legislative tools to control individual and collective liberties with stringent measures. Yet the voices of the civil societies against such measures are rarely heard. It seems that the civil society has forgotten to ask questions and raise voices against the public policies that go against the spirit of the constitution, which has guaranteed certain fundamental rights as non-negotiable.

There has been a calm silence in the public space as if everything is moving smoothly. Some regard such circumstance as the outcome of fear and some think speaking against it could invite retribution. The fear of unwanted prosecution and chances of losing prospective gains seem to be guiding the silence of civil bodies.

Doubts have also been raised on chances of misinterpretation of the provisional clause related to ‘reasonable restriction on right to freedom and communication’ of the constitution. There are certain words, such as incitement to an offence, defamation and public decency or morality, which may be interpreted according to the convenience. When have we demanded specific definition of these words?

In order to give legality of the digital transactions, protect data, and penalize the digital offences, cybercrime, the legal measures are essential. However such legal measures should not restrict or limit the civil liberties. Any encroachment on individual liberties increases the chances of undermining rule of law.

It has been argued that most of the rights activists represent the left leaning parties and they are silent since the leftist party is occupying the center of power. If Nepali Congress or any other party was at the helm, the rights activists would probably have fiercely raised the voices in the streets and raised the issue of severe human rights violation not only in the case of Dilip Mahato but also in others.

Numerous reports expose nefarious nexus of the heartless and mindless crony capitalism and governance. But voices have not been raised against them. When democracy becomes the hostage of kleptocracy and crony capitalism, transparency and accountability becomes a distant cry. At a time, when the political opposition is also in a weaker position and unable to effectively debate the policies of the government, it is an obligation of civil societies to articulate and intensely debate the contemporary challenging issues with direct bearing on civil liberty and democratic governance.

Unless the civic bodies come up with strong opposition where they deem the action and policy of the government contradict with the fundamental rights of the citizen or infringe upon the individual and collective liberties, the government will be encouraged to put into force the stringent measures to control them without any hesitation. Thus academics, experts, professionals and social activists need to do away with the fear from greed of personal gain or loss and think of greater good for the society. They also need to be free from material and psychological fear if they would like to live in a nation under democratic system of governance. Raising question is a fundamental right of the people. Let’s not hesitate to question if any actions of the government impact our life, living and liberty.

The author served at Ministry of Foreign Affairs
Email: bartaula58@gmail.com

DHANUSHA, Jan 13: The State-2 government has decided to provide relief assistance of Rs 500 thousand to the family of... Read More...

BIRATNAGAR, Jan 29: Following the death of a girl who was mowed down by a tipper-truck at Sundar Haraincha-9 of... Read More...