The way we talk 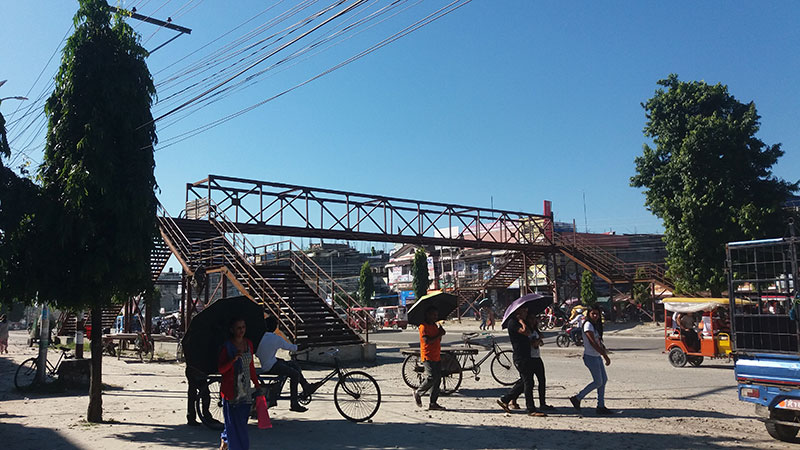 Overhead bridge on East-West Highway, a gift by KP Oli to Damak, his constituency. A subject of endless talk locally.

Never before have we been so vocal and articulate. We have dismantled the old regime via the sheer power of talking defiantly
During the festival season, you happen to meet people from an array of backgrounds. Socialization becomes a major industry.

So, tell me, how do you do? You ask this middle-aged man in a gathering.

He begins by telling that he recently visited his son in Australia. He continues with how he had persuaded his boy to abandon his earlier plan to move to Japan and half an hour later, he is still blabbering about his education, hobbies, and how far he had made it in the continental nation.

No amount of your yawning, distraction of eyes, or restiveness will be able to dissuade you from listening or pretending to listen. You begin to observe many talking situations that, in their intensity, compete with those on media screens.

In eastern Nepal, a young man tells me no other topic is so popular among his peer than “going abroad”. Ceaseless talk about how a relative working in a foreign land had become rich puts tremendous stress on young listeners, leading some to depression and even suicide.

Reports of deaths as well as births were too frequent in villages, a fact that was accentuated by lost Dashain celebrations due to jutho (mourning) or sutak (ritual impurity) so often talked about by elderly people.

Death is the looming destination for the elderly. It forms the basis for a narrative of self-pity.  Yet, nobody seems to question sutak; why should the birth of a child cast such an evil shadow? They also often talk about loneliness, about the fact that many don’t have anyone to lean on to.

Marital discords and breakdowns, almost always with the plotlines of conspiracies and betrayals, dominate the conversations of stay-home housewives. The young often talk technological gadgets, another version of application, and social media feats or misadventures. Or, homework is dull.

Adult men talk money a lot. Most whine about how others made their way through corruption and wickedness. Some rub salt on others’ wounds by announcing they have acquired a new real estate, built a house, bought a car; or sent an offspring to Boston for higher studies, etc. And you end up feeling sorry for yourself for not buying a swampland, years ago. Today, it forms a part of the bustling town.

Of course, political prattling is all-pervading and everything about it is often reduced to “those discredited leaders” who talk in the dark, announcing “important” decisions during midnights. And if it serves your hometown ego, no amount of dishonesty by leaders can stop you from showering all praises on them. Of the many high-sounding projects KP Oli gifted to Damak, his constituency, you must talk endlessly about the overhead bridge on the city’s thoroughfare, perhaps the only milestone of such type on the East-West Highway.

These threads of social chatter often underscore social disintegration, technological reach, ascendancy of markets, and, above all, self-interest. Amid the newly-found freedom, our “great transformation” is marked by chatter, by ceaseless gabble and noise.

Not long ago, reticence defined our national character.  It was more like we were in a meditative state, leaning toward the Chinese, Japanese, and the Nordic people.  We pitied the Indians for being such motormouths.

Now, we are at a turning point in our loquaciousness. Never before have we been so vocal and articulate. Consequently, we have dismantled the old regime via the sheer power of talking defiantly.

And yet, in our daily chatters, we hardly keep to the subject or focus on the substance without being emotional, aggressive or shoddy. Our desire to self-express, to bond with others is so powerful that our talking contributes little to sharing and informing. Nothing important to convey in order to talk.

Our talkers come in varied hues. The marathoners prattle on about everything under the sky, ceaselessly, without the possibility of you injecting any reaction. Divert them, if you can, and they continue with “what was I saying?”

The backbiters are the most sinister group and they keep a close tab on everyone around and never have anything good to say about anyone. The whiners never tire blaming institutions and the leadership, notably political figures, for every godforsaken problem. Consider the wasted time during business meetings.

The narrators are a narcissist bunch, who out of self-pity or for self-gratification, become nostalgic about their past: You know, when I was the director of the…. They show total disregard to key points, and offer endless chronology of events.

The sermonizers are all-knowing, all-wise, self-appointed instructors, a moralizing bundle. They are very argumentative and will decide what is right or wrong for you. They think they dwarf even an expert sitting next to them. Listen to this: I have often said…Their own lives offer little illustration of what they preach.

The trash tossers form another group, perhaps a minority but a very disgusting one. Offensive and vulgar language forms their trademark. They inflame hate speech and like to insult people, and cannot complete a sentence without using a swear word.

The virtual gobblers, armed with new gadgets, are an emerging type, and they incessantly feed social media as a way of escape, assertion, whining, pontification, trolling, etc. In real life, many are a silent type.

As the cultural historian Prem Kumar Khatry cautions, sure, we cannot lump everyone into a single basket. Although Nepali women are still admonished to shut up in many households, Dr Khatry believes they enjoy more freedom of speech today, and ethnic groups like Janajati and Dalit are more expressive and boisterous than other groups.  “With increasing education, foreign exposure and democratization, we have become deft at talking like the Indians”, he says “however, a large segment of the uneducated lot still remains reticent”.

The problem is how we talk, he adds; we focus too much on trivialities and not on substance or relevance. He observes that even among the educated, only a few can tell you the per capita income, infant mortality rate of the country or other such indicators. “Nepalis don’t seem to have the capacity to synthesize in key points”, he says, “they go on and on with long, bookish accounts”.

He believes that our defective socialization process is to be blamed. We treat children like any other person, without bracketing their development milestones by age range or skills. We rely entirely on schools, with little roles left to families and communities.

Truth has become secondary to feelings. Anthropologist Mukta Sigh Lama observes we live in a post-factual age, as in the way Donald Trump talks, or in our own feudal culture that today conforms to multiple centers of power. All that matter are hierarchies, winning and losing.  He finds the book Argumentative Indians by Amartya Sen evocative of this issue. For if we argue on everything, where do we stop? Does it lead us to a consensus on the moral principle of common good?

As it is evident in our “transparent hypocrisy”, Dr Lama notes, there is no congruence between what you say and what you do. Seminars and workshops have turned into performances where ideas and tall talks are recycled endlessly.  Inspired by a Nepali proverb perhaps, people with flour are shouting all around and pulling crowds while those with rice grains are not even able to open their mouths.

Dr Lama believes some share of the blame goes to media that have become unaccountable; they not only represent society but are affected by it. He cites FM radio stations that often play with words just like social actors do and the rowdy social media where users have this illusion of obscurity or anonymity.  Fortunately, he observes, because of close kinship and solidarity among community members, communicative practices at the local community level are more responsible and humane than in the broader public sphere.

We seem to be inebriated with the exuberance of our own verbosity, to rephrase Benjamin Disraeli. Should our self-expression continue to hinder talking to inform adequately?

There is no easy or quick way to get into a US university and so there’s no such thing as a... Read More...