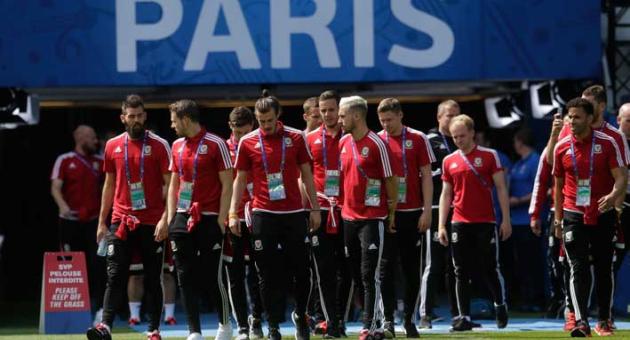 In five transformational years, Wales and Northern Ireland have gone from playing in front of 529 fans to preparing for a British derby in the 45,000-capacity Parc des Princes in Paris.

And rather than a meaningless friendly, as the 2011 fixture was, this time Wales and Northern Ireland will be meeting in the round of 16 at the European Championship.

No longer a soccer sideshow, these small British nations will take center stage in the French capital on Saturday. There will even be an English referee, with Premier League official Martin Atkinson taking charge of the game

The start of the knockout phase is uncharted territory for Wales and Northern Ireland as they make unexpected progress on their debuts in UEFA's continental showpiece.

"It's another new challenge, new experience," Wales forward Gareth Bale said, "and one I'm sure everybody will relish."

Few will relish facing Bale. The Real Madrid forward has taken to tournament soccer effortlessly, already the joint-leading scorer with three goals. Although Wales was beaten by England, Chris Coleman's side still advanced as Group B winners.

"It's a moral victory for us," Bale said. "It's a bit of a bragging rights that we finished top ... it's always nice to get one over the English."

Northern Ireland will be a different proposition to England, less ambitious going forward and more dogged at the back.

"I think they're a bit more defensive than maybe we are," Bale said.

The Northern Irish only conceded twice in Group C as they advanced with one victory, over Ukraine, as one of the best third-place teams.

"We've got one of the best defenses in the tournament," Northern Ireland forward Kyle Lafferty said. "I don't think they've been given enough praise for what they've done. It's going to be a tough game, but hopefully we'll be celebrating at the end."

And in Michael McGovern, Northern Ireland has a goalkeeper who won admirers across the game when he prevented his team being thrashed by Germany. The dominant world champions only beat the 31-year-old McGovern once as they eked out a 1-0 victory on Tuesday.

Not bad for a goalkeeper who was playing last season for struggling Scottish club Hamilton and is out of contract next week.

"He was a great shot-stopper," Northern Ireland defender Jonny Evans said. "I think that's one of his great qualities and his ball control. He's very comfortable with the ball at his feet, he's added that. He's a very good goalkeeper and probably could be playing at a higher level."

The team's problem is its lack of attacking threat, with only two goals in Group C and Lafferty, who netted seven in qualifying, yet to get off the mark in France.

The reward for advancing is a quarterfinal with either Hungary or world No. 2-ranked Belgium. Then it would be a semifinal against Switzerland, Poland, Croatia or Portugal — having avoided the side of the draw featuring holder Spain and former champions France, Germany and Italy.

"We can't think about Belgium," Bale said. "We know our side of the draw. Maybe it is more favorable. But it is not favorable if you don't get through."

The last time Wales was at a major tournament, the 1958 World Cup, it bowed out at the start of the knockout phase. When Northern Ireland traveled to the 1986 World Cup, it left early after failing to advance from the group stage.

"We're in such a position here to create history that can last a long time and we don't want to let go of that," Evans, the veteran Northern Ireland player, said. "We want to go as far as we can and not waste this opportunity."

CARDIFF, Oct 10: Ireland ripped up the script by beating Wales 1-0 to secure their place in the playoffs for... Read More...