Mahat for finalizing SAARC pact on promotion, protection of investment 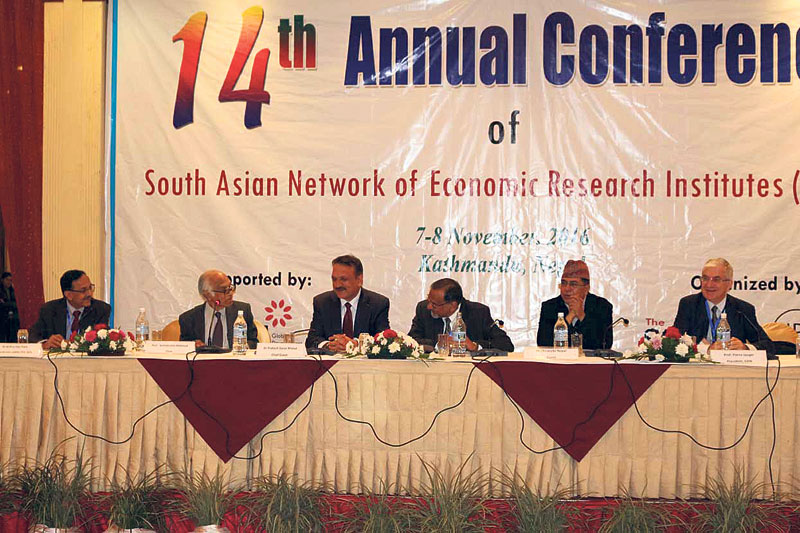 While the SAARC has decided to prepare a draft for the agreement in 2004, it is yet to be finalized and come into effect.

Speaking at the inaugural ceremony of the 14th Annual Conference of South Asian Network of Economic Research Institutes on Monday, Mahat said that there should be a regional air services agreement for enhancing air connectivity for deeper regional integration. "South Asia suffers from railway gauge mismatch and limited railway infrastructure especially in landlocked countries. We need to promote a regional transport corridor, build a South Asian railway network, finance cross-border transport projects, and harmonize rules, regulations and standards in this regard," he added.

He also said that there was a need for strengthening the agreement on avoidance of double taxation and the agreement on mutual assistance in tax matters with a view to creating an enabling investment environment in the region.  "We also need to develop a regional investment policy framework and improve national information on investment opportunities," he added.

Also speaking at the inaugural session, Nepal Rastra Bank (NRB) Governor Chiranjibi Nepal underlined the need for concerted efforts to develop a network of cross-country infrastructure. "The physical connectivity among the South Asian countries through quality roads, railways, air-links, waterways, information super highways and cross-country power transmission lines along with related infrastructures will boost flow of goods, services, finances and information," he said, adding: "The more we invest in infrastructure, the faster would be the process of integration."

He also said that the investment in infrastructure will put the region in a better position to increase the flow of financial, technological and energy resources from surplus to deficit region and thereby increase productivity and competitiveness for mutual benefits among the countries of this region.

Fifty international and 75 domestic participants are attending the conference where nine scientific papers from various scholars from South Asia are being presented, according to the organizers of the conference. Prominent researchers, professors and economists of South Asia are scheduled to speak on issues like 'Global Production and Networks and Patterns , 'Impact of Barriers on Trade' and 'Implications of Regionalism', 'Strengthening Young Research Institution in South Asia: the Experience of the Royal University of Bhutan'.

Developing nations' plea to world's wealthy at U.N.: stop vaccine hoarding
11 minutes ago
Afghanistan and the United Nations
1 hour ago