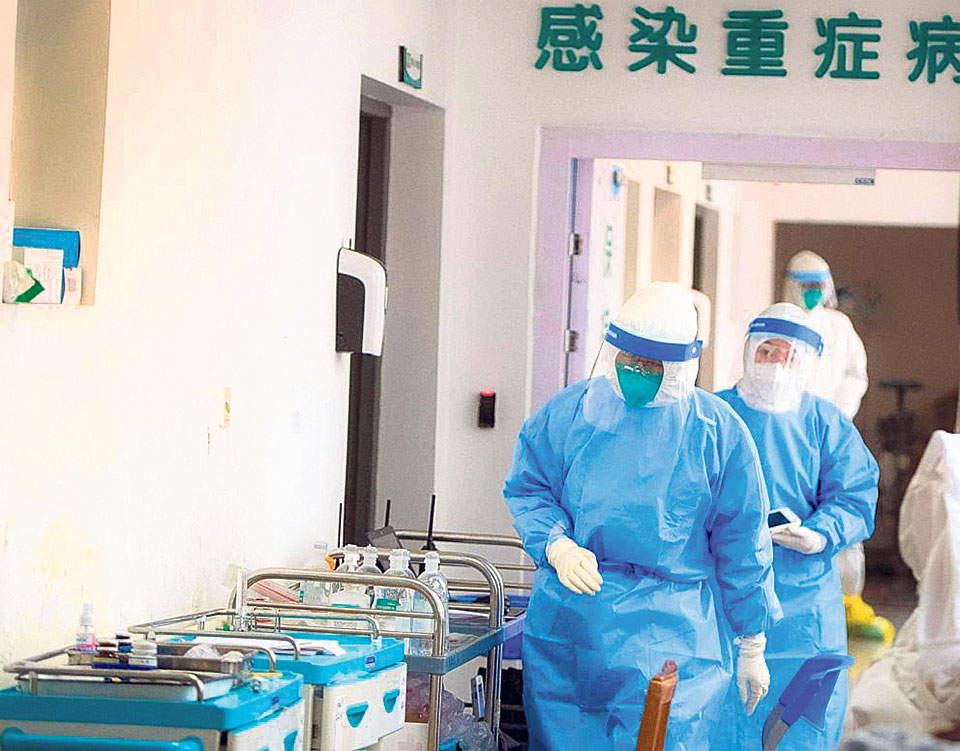 China is battling with the worst epidemic since 2002 SARS.  Since the coronavirus outbreak in early January this year, the country has suffered huge human and economic losses. According to the recent data, more than 400 people have lost their lives and over 20,000 people have been infected across the country. This has sent the whole of the country and the world in a panic mood.

The epidemic has spread in many parts of the world including in the US, Australia, India and Japan. Thus every country is taking precautionary measures to ensure that their citizens do not get infected. Every country, including Nepal, should do that, because once the virus comes to Nepal, it will be nearly impossible for Nepal to contain its spread because Nepal does not have sophisticated health facilities, nor quarantine facilities. In this regard, Nepal’s preparation to fight it back has been really disappointing.

Your newspaper reported that on Monday night, over 100 passengers flying to Nepal from China were allowed to enter the Valley without conducting screening tests on any one of them. This reflects pathetic preparation of Nepal and it has to change. But I see that the Western world and India have not been fair toward China at this moment of crisis. Look at the way they have reacted. There has not been collective voice in solidarity with China in this fight against the global pandemic. These countries have cancelled flights from and to China and they are asking their citizens not to travel to China.

The response of the United States, in particular, has been disappointing. The US has barred foreigners who have travelled to China within the past 14 days from entering the country. This is not the right response.  The people coming from China should be screened and tested before they enter the US but they should not be restricted from entering the country. The World Health Organization (WHO) has not recommended travel and trade restrictions for China. While China is in crisis, US Secretary of State Mike Pompeo called the Communist Party of China “central threat of our times.” US Secretary of Commerce Wilbur Ross said that the deadly virus would bring jobs back to the US.

Even in this daily, one Indian national has written that Nepal should cancel all flights operating to and from China. I think such remarks are unhelpful.  We should call for greater preparedness and quarantine measures, and treatment but canceling flights with the country in suffering should not be encouraged.

Needless to say, coronavirus will have a huge impact on Chinese economy. It is estimated to result in loss worth billions of dollars. The year 2020, it seems, is going to be bad year for China. It was reeling under the trade war with the US. Slowly it was emerging from this war after the ‘phase one’ deal with the US. Then came the coronavirus pandemic.

Now that Chinese economy is suffering it is going to affect American economy and European economy as well. The least developed countries like ours will have to suffer even more.  In this situation, what China needs is an encouragement and support from other countries from the humanitarian perspective.   Every country needs to stand by China until China overcomes this battle against coronavirus. In times of crisis like this, all the countries in the world, including Nepal, should support China because coronavirus has triggered a global health crisis.

I suggest that Nepal should issue a statement expressing solidarity with China in its fight against the pandemic.  Let us not forget, when Nepal was under the blockade, China had spoken in our favor in global forums.  It had also sent us oil and induction stoves for free. Friend in need is the friend indeed, goes the saying. China needs friends at the moment. Many friends, in fact.