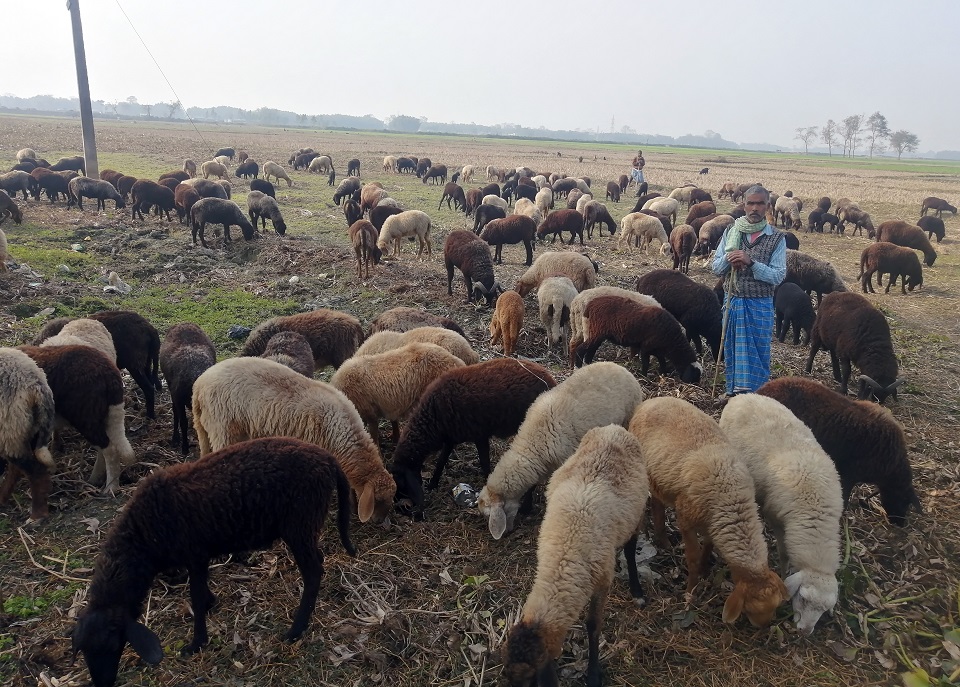 ITAHARI, Feb 3: When it comes to herding sheep in commercial scale, common people, in Nepal, only think about alpine meadows in the mountainous region. Shepherds, pictured their grazing sheep against the backdrop of Himalayas, do appear in different newspapers and touristic posters. This has created a narration in the conscience of the general public that herding sheep and shepherds are only the matters of the mountains.

Interestingly, there are many shepherds even in the Terai plains of Nepal.

One of them is Khilananda Paal. Paal, 65, starts and ends his daily chores with his flock of sheep. He is a shepherd for all days in a year. He has inherited this ancestral profession since his great grandfather.

''I started to graze and rear sheep with my father at a time when I was reading in class eight,'' recalled Khilananda who was seen grazing his herd in Bhantabari of Sunsari this Sunday. He added, ''After the demise of my father in 1999, I had to take care of all these sheep.''

Currently, Khilananda, who hails from Harinagara Rural Municipality-3, of Sunsari, has 75 sheep to graze in the tropical region of Nepal. All of these sheep are not purchased from anywhere else. They were grown in his own home. ''We are into this profession since our ancestors and we don't need to buy sheep from others,'' said Khilananda. He said his all four male siblings are in this traditional profession.

Together with sexagenarian Khilalananda Paal was teenager Mukesh Kumar Paal. Mukesh, an inhabitant of Dewangunj Rural Municipality-1, is running at the age of 19 and he has 140 sheep to herd every day. He was also seen herding his flock of sheep in Bhantabari of Sunsari. This youngest generation of Paal community is happy with his earning but sad with his education.

''I can save around 400 thousands a year and can fund all four members of my family,'' said Mukesh Kumar, adding, ''Still, I am unhappy that I couldn't finish my studies as I was compelled to fund my brother pursuing his veterinary education in Biratnagar.'' Growing business, dwindling grazing areas Khilananda and Mukesh are happy with the growth of their business.

The wool fetches 500 rupees per kilogramme. A millilitre of ghee costs 10 rupees. The selling price of sheep is also good. According to Paal shepherd duo, minimum price of an adult sheep ranges between 10 thousands to 35 thousands. Mukesh Kumar said there is growing demand of wool by carpet and clothing factories from Kathmandu and the ghee is always on demand in local market itself. Such an inspiring growth of business avenues is troubled by dwindling grazing areas.

''There used to be a lot of open grazing areas in Dewangunj, Kaptangunj, Harinagara and other parts of southern Sunsari,'' Khilananda recounted his 40 years of sheep herding. He added, ''Now, all open spaces and grazing zones are filled with houses and land plots with fences making grazing zones scarce for our hundreds of sheep to graze every day.'' Mukesh Kumar shared similar concerns: ''The grazing zone has depleted rapidly in last five years. If, this trend grows in the same pace, we can't graze more than a zone sheep in a day.''

Khilananda is well known about this. He said none of the younger generation from all his siblings would join this traditional profession. ''Most of our kids are interested in office works and foreign employment,'' rued Khilananda. Mukesh also said he is the only remaining last generation of shepherds in his family.

As he said, not only in his family, all their other neighbors were also joining other professions. ''Some of them have joined police, army and some have started new business,'' he explained the tendency of turning away from this traditional livelihood. "If grazing zone keeps depleting, I also have to leave this profession midway.''

BABIYACHAUR (Myagdi), Aug 18: Two shepherds were hurt and at least 72 sheep killed when lightning struck them at Girka... Read More...

Cabinet meeting underway in Baluwatar, likely to endorse recommendations made by CCMC to contain spread of COVID-19
6 hours ago

Cabinet meeting underway in Baluwatar, likely to endorse recommendations made by CCMC to contain spread of COVID-19
6 hours ago