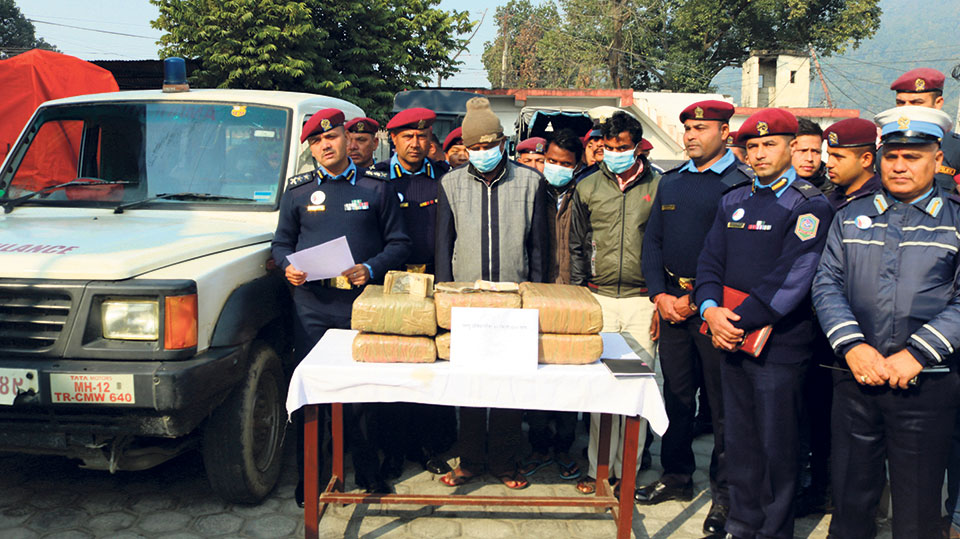 Police in Makawanpur district make public three persons including an Indian national on the charge of using an ambulance to smuggle marijuana on Sunday. They were arrested on Saturday evening at Newarpani in the district with over 30 kg of marijuana, Rs 91,000 and Indian currency Rs 2,200, according to police. They had used the ambulance of Dumariya Health Post of Rautahat district. Photo: Ashok Sujan Shrestha/Republica

KATHMANDU, Jan 27: Police on Sunday made public six persons arrested on the charge of robbing Rs 5 million of a man in Kathmandu last week.

The arrested have been accused of luring a victim and looting Rs five million by throwing chili powder in the eyes of the alleged victim, according to police.

A team of police from the Metropolitan Police Crime Division (MPCD) arrested two of the accused on Friday, while the remaining four were arrested on Saturday after the alleged victim filed a complaint with the police. The victim originally from Melamchi of Sindhupalchowk district is a Kathmandu resident since the past several years.

The arrested had tricked the victim to bring Rs 5 million claiming that they had a stone with “supernatural powers” that would glow, police said.

One of the arrested, Bhim Bahadur Gharti Magar, had told the alleged victim to come to a secluded area with Rs 5 million to purchase the stone.

“As the alleged victim had blind faith in magical powers, he arranged Rs five million by putting his and his relatives’ land as collateral,” said SP Mukesh Singh, spokesperson for the MPCD.

“The arrested had called the alleged victim to Tarakeshwar Municipality with Rs 5 million to get the stone on Thursday at around 10 in the morning. When he reached the place, the robbers threatened him with knives and rods before throwing chili powder into his eyes and robbing the money from him,” Singh said, adding that the alleged victim had filed a complaint at the MPCD on Friday.

The arrested have been identified as Bhim Bahadur Gharti Magar, 38, a resident of Khotang; Nakur Tamang, 30, a resident of Nuwakot; Dawa Tshering Tamang, 38, of Rasuwa; Kumar Bahadur Budhathoki, 36, of Ramechhap; Tenzing Bahadur Tamang, 36, of Rasuwa; and Sanjeet Waiba, 28, also from Rasuwa. The MPCD made them public amid a press conference in the capital on Sunday.

After the arrest, police could recover only Rs 1.8 million from them.

“They had already spent some money,” said Singh, adding that three motorcycles, smartphones of different brands, and a gold ring were also recovered from the arrested.

Likewise, police investigation found that the arrested had purchased smartphones, motorcycles, paid EMIs and loans with the looted amount.

The arrested have been sent to the Metropolitan Police Range, Teku, for further investigations, informed Singh.

“The group had been looting people claiming that they have stone with “supernatural powers”, bone of Banjhankri (a mythical creature with magical powers), among other things,” the police investigation found.

PM warns Chand group to shun violence, or else

KATHMANDU, March 9: Alleging that the splinter faction of the erstwhile CPN (Maoist) was involved in robbing and looting people,... Read More...

KATHMANDU, Jan 5: Police have arrested a man for his alleged involvement in stealing Rs 10 million from various financial... Read More...

KATHMANDU, July 21: Police have arrested a man in possession of two kilograms of smuggled gold from Nagdhunga. ... Read More...