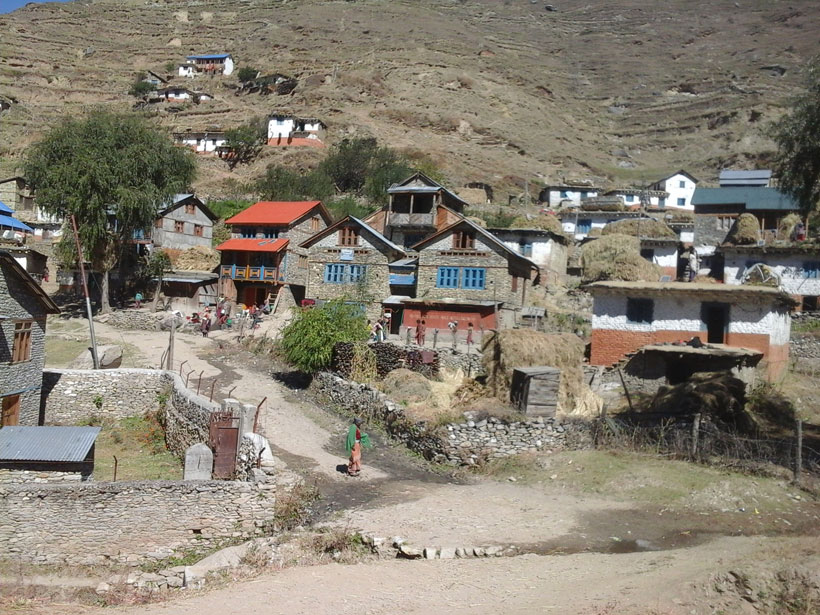 The atmosphere at Jumla’s Khalanga bazaar is rife with political debates every single morning. The area around Chandanath Mandir that is dotted with teashops teems with locals and there begin the discussions. Every now and then, people even take out their 3G smart phones to share news bulletin notifications. Party strategies, government policies and pitfalls, the future of the nation are all brought up for scrutiny along with a cup of tea. (Lokman is the hottest topic of the moment.) And as opinions are put forth, it’s very clear just how acutely in tune the Jumlis are with the current happenings in Kathmandu.
Now to think that this is the same district that once famously believed Nepal ushered its democracy in 1951. Jumla was so cut off from the rest of the country that at the time, they got news of the declaration an entire year later. It’s a scenario that is still used to explain the extent of the remoteness and inaccessibility of the place.

But clearly, not anymore. The Jumlis unreservedly express their own surprise at the transformation of their home. Concrete buildings have become a common sight around the bazaar side. Authorities are currently paving some of the streets around town. There is a fully equipped gym in the main Jumla bazaar whereas fashion stores, mobile showrooms and, more recently, three snooker clubs are proving to be popular fixtures in the community.

This talk of all the transformation among the locals inevitably always ends with a mention of the 232 km long, Karnali highway. Many Jumlis can even recite the exact date (Chaitra 30, 2063 B.S.) when the much anticipated highway was officially opened for their use. It has had just that much of an impact on their lives.

Narajit Pariyal, 34, for instance, is comfortably working for an INGO today. Through his office’s project he is also helping other villagers from different VDCs launch their own micro entrepreneurial business. He claims to be fully content with his life in Jumla at the moment, a sentiment he thought unimaginable back in his teens.

“I couldn’t have imagined this life in Jumla, even in a million years,” says Pariyal, “None of us thought we would see this road in our lifetime. But when the highway opened, the opportunities and the possibilities came in as well. After all the years living abroad, it’s the reason I decided to return home.”

Pariyal still has many memories of the life and struggle in Jumla before the accessibility of the highway. As a 14-year-old, he recalls, not having enough food to eat or clothes to wear. Worst of all, since the sources of income were few and far between; his parents had no choice but to send their teenage son to India for manual labor. He still vividly remembers the five days walk to Surkhet that had left his foot swollen and aching in the cold winter. Pariyal eventually ended up working as a dishwasher for Rs 300 a day.

It was a fate many Jumlis ultimately resigned to but the scenario has improved immensely over the years. Pariyal shares that he is particularly happy about the improvement in the education sector. While he and his friends had to walk nearly three hours to attend a government school, his daughter will have it much easier. The Jumla district currently has 165 schools and two campuses, one of which even offers a Master’s degree.

Further, development and drastic changes aren’t only evident in the town area. The villages too have become significantly well quipped and the people more sensitized. Rumesh Shah, 27, who farms apples for a living shares, “Where farming is concerned, the road has really opened up our business prospects. It’s been years since I last sold my apples for two rupees per kilo.”

Today his concerns are the competitive prices of the market and the possibilities of expanding his produce. Though it is still a lot of hard work, he cites examples of his neighbors who are funding their two kids’ medical education in Kathmandu. This definitely wasn’t an option regular farmers in Jumla could have entertained before. But now, this has apparently even become a bit of a trend among many farming families. It’s a clear indicator of the impact road connectivity and market accessibility has had on their lifestyle.

Only a decade ago around this festive time of the year, Shah recalls having to wait in line for nearly three days to get five kilos of rice at the bazaar. Those were the days when Jumlis didn’t have access to the markets, thus the government used to transport food supplies via planes. Although it was a celebratory time of the year, Shah remembers being filled with resentment back then.

The differences between now and then are stark indeed. In the decade that the Karnali highway has opened, it has certainly impacted one of Nepal’s most neglected and deprived regions in ways previously unimaginable and steered them in a different direction.

The Jumlis still talk about those days when many of them used to run away at the sound and sight of a vehicle. They still talk about the first public vehicle – a taxi that was airlifted into their district – and laugh about how some of their own people placed grass near the new vehicles hoping to feed it. They don’t deny these embarrassing accounts but actually embrace their history and reputation of being a severely deprived region in hopes to reinvent themselves.

And the results have been impressive so far. Bijay Lama, a travel agent who frequently takes his clients up to Rara Lake, shares that he has recently begun suggesting at least a day’s rest in Jumla on their way back to his guests. Apparently, the visitors’ surprise at the magnitude of the district’s transformation has become his favorite part of the journey. In fact, Lama reveals, when the guests are Nepalis it’s less of a surprise and more of a shock.

“Many people still utter Jumla and Humla together in the same breath. In classes, we studied about how they suffer from food, hygiene and poverty problems and that’s the image we still have of them. Now while the narrative stands true for the likes of Humla and Dolpa, Jumla is a different case. Many people still don’t know that,” says Lama.

In the past, there were only a couple of doctors in Jumla so the locals couldn’t get adequate treatment. If the case was something more than a headache or stomach ache, the only option was to go elsewhere via an airplane. Obviously, the average income earners couldn’t even think of this. So this institute has proven to be crucial.

This hospital not only helps teach future medical personnel in this region but it has actually also helped improve the standard of medical health care. We have 13 specialized doctors from various fields, 17 medical officers, 120 staff nurse, and 80 students. I believe we are taking big strides in improving the health sector of not only Jumla but also Karnali. Along with the services, there is an urgent need to spread awareness about hygiene, cleanliness, and sanitation. So we send our students around the villages every now and then. It’s all about habit. We need to educate the younger generations of our area.

The plan is to expand our facilities. We are developing our infrastructures at the moment. We should be done by next Dashain. We are giving a lot of priority to the quality of construction. It’s perhaps the best in the entire Karnali region.

The road has undoubtedly bought in many possibilities and opportunities for us here in Jumla but I believe we need to be wary about its exposure as well. As a student of culture and language, I’m particularly interested in preserving the unique charm of our Jumli ways and traditions. It’s important to start preserving our culture right at the start itself. It may have only been a decade since the highway started bringing in and, most importantly, taking more people out Jumla, but I can already detect changes in Jumlis interest.

Naturally, young people are more prone to be attracted to new things. Youngsters in our villages and towns are already paying way more importance to their clothes. The trend of going out of the district after SLC is rampant as well. They are already looking down on the farming profession as well. So we need to be wary about these changes in attitude. Perhaps, we can find a way to adapt without losing our identity. I have been requesting the authorities to build a dance and music cultural center here in Jumla. So far, they haven’t shown any interest but I think it’s crucial to act on these things right now.

Apples and jadibuttis are still the biggest source of income for us farmers. It is true that we can comfortably make a saving of at least a hundred thousand rupees from the sales of our produce but that doesn’t mean we don’t have hardships. There are still many strides to be taken in the field of agricultural technology and development. Further, as happy as we are that we can access the markets because of the highway, the market is still very competitive.

But still I don’t want to complain. We have been through some really tough times. Today there are so many NGOs and INGOs working in the area. Apart from applying for the lok sabha and farming, their projects have become another popular career option. As a parent, I’m just glad that I get to help send my children to good colleges. I think that’s where most of us farmers put our money – our children’s education. Some of our kids are actually in medical and engineering colleges in Kathmandu. In the past, this wasn’t an option for us. Only rich people in our district could afford such futures for their children. This is another boon that has come from the roads.