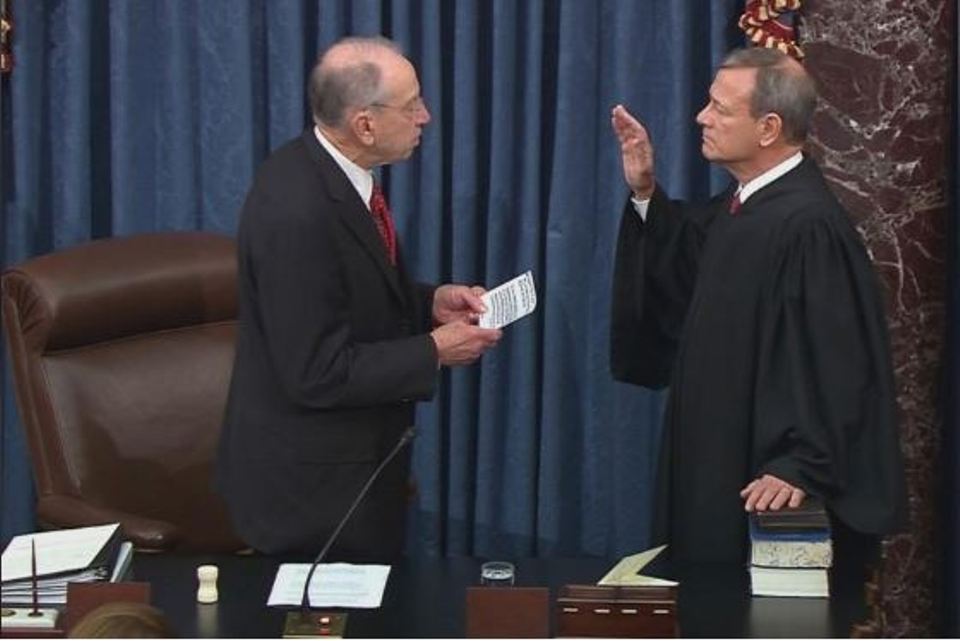 The publicity-shy, traditional conservative jurist not only will preside over the Republican president’s Senate impeachment trial that formally began on Thursday but in the coming months will cast potentially decisive votes in major cases before the Supreme Court including one in which Trump is fighting to keep his financial records secret.

In the Senate trial over whether to remove Trump from office over two charges passed by the House of Representatives arising from his request that Ukraine investigate political rival Joe Biden, the role Roberts will play is expected to be primarily ceremonial. The Republican-led chamber sets the rules and the 100 senators serve as jurors, with Roberts presiding over the proceedings on the Senate floor.

When the proceedings begin in earnest on Tuesday, Roberts will have to juggle his trial commitments with his “day job” at the Supreme Court across the street from the U.S. Capitol.

The court hears arguments in cases on Tuesday and Wednesday, including a closely watched dispute over religious rights involving public funding for students to attend private religious schools. The arguments are expected to end at around noon, giving Roberts time to take his place in the Senate for the planned 1 p.m. trial session.

After next week, the Supreme Court is scheduled to take its usual mid-winter break, with the next arguments scheduled on Feb. 24. By then, the impeachment trial could very well be done.

During a ceremony on the Senate floor on Thursday, Roberts, wearing his black judicial robe, was sworn in by Republican Senator Chuck Grassley to assume his trial role.

“Senators, I attend the Senate in conformity with your notice for the purpose of joining with you for the trial of the president of the United States. I’m now prepared to take the oath,” Roberts said.

His hand shaking slightly as he held a sheet of paper, Roberts then swore in the senators as jurors. The senators raised their right hands and swore to “do impartial justice according to the Constitution and laws.”

With Trump’s fellow Republicans holding 53 seats in the 100-seat chamber and a two-thirds vote necessary for conviction, he is likely to be acquitted and kept in office.

The chief justice’s role as presiding officer is limited mainly to keeping the process on track. Roberts could, however, be asked to rule on whether certain witnesses should be called to testify. If a majority in the Senate disagrees with a ruling he makes, senators can vote to overturn his decision.

“The Chief Justice is aware of his responsibilities and is preparing appropriately,” court spokeswomen Kathy Arberg said.

In the 1999 impeachment trial of President Bill Clinton, Chief Justice William Rehnquist presided. In a television interview after the trial, Rehnquist quoted a line from a Gilbert and Sullivan operetta to explain his role: “I did nothing in particular and I did it very well.”

It is in the marble-lined corridors of the Supreme Court, away from the TV cameras, where Roberts holds real power. The nine-member court will decide by the end of June whether Trump’s financial records can be handed over to Democratic-led congressional committees and a New York prosecutor.

The court’s rulings in those cases – on the power of Congress and local prosecutors to investigate a sitting president – will set precedents that may affect not just Trump but also future presidents.

Legal experts have said Trump, who unlike previous presidents has refused to release his tax returns, is making broad assertions of presidential power that could place new limits on the ability of Congress to enforce subpoenas seeking information about the president.

As the justice who is considered the ideological center of the court, Roberts could cast the decisive vote in that case and some other important ones awaiting rulings.

Roberts, a 64-year-old conservative appointed by Republican President George W. Bush, has a reputation in Washington as a traditional conservative and a strong defender of the Supreme Court and federal judiciary. He served in the administration of Republican President Ronald Reagan, then Bush appointed him to the federal appeals court in Washington in 2003 before selecting him for the chief justice post two years later.

Roberts is often viewed as an incrementalist in his judicial philosophy, conscious of the fact that the Supreme Court risks its legitimacy if its 5-4 conservative majority appears too aggressive in moving the law to the right.

He has voted consistently with his conservative colleagues on such issues as gay rights, abortion, religious liberty and gun rights. In 2012, he broke ranks and cast the deciding vote to uphold the Affordable Care Act, also known as Obamacare, Democratic President Barack Obama’s signature domestic policy achievement.

Roberts last June again sided with the court’s liberals as the court ruled 5-4 against the Trump administration’s attempt to add a citizenship question to the 2020 census that critics called an attempt to deter immigrants from taking part in the decennial population count.

In 2018, Roberts clashed with Trump, taking the unusual step of issuing a statement defending the federal judiciary after Trump repeatedly criticized judges who had ruled against his administration.

In his annual end-of-year message on Dec. 31, Roberts hinted at his past disagreement with Trump and again stressed the importance of an independent judiciary.

“We should reflect,” Roberts wrote, “on our duty to judge without fear or favor, deciding each matter with humility, integrity, and dispatch.”

WASHINGTON, Jan 16: After weeks of rhetorical fire and fury, a handful of U.S. House members walked quietly across a... Read More...