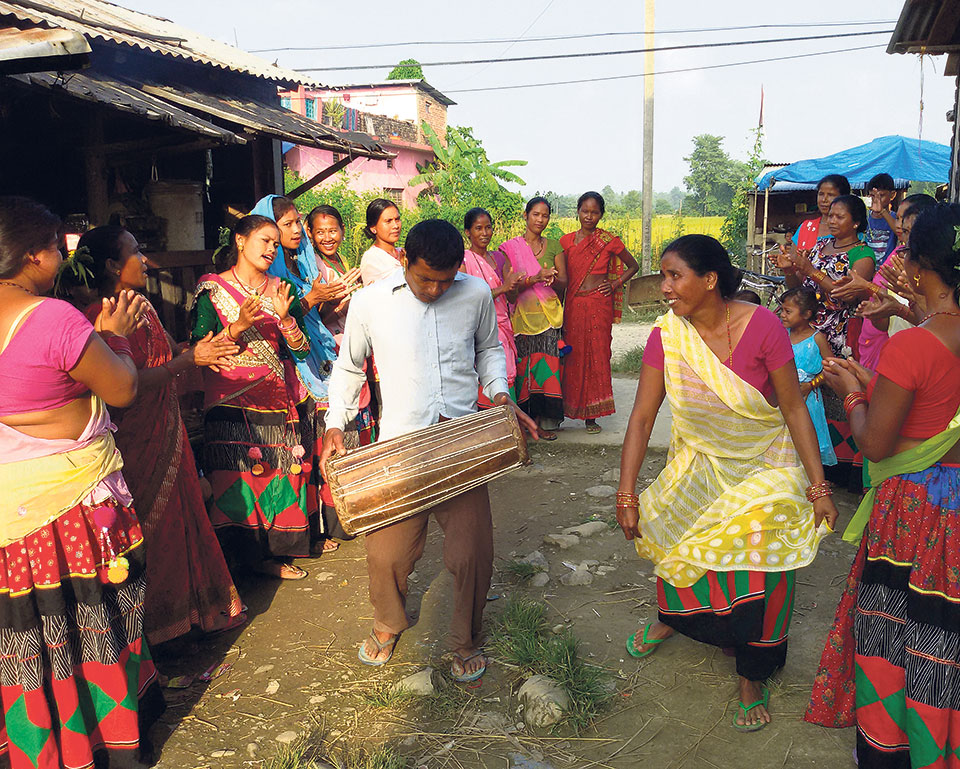 Members of the Tharu community performing the traditional Jhumra dance in Kailali in this file photo. Photo: Pushpa Raj Joshi/Republica

KAILALI, Jan 15: The last day of the Nepali month of Poush (14 Jan this year) is considered the new year eve by the Tharu community. The eve is celebrated with a great fanfare and liquor holds special value during the occasion. From offering to the gods to welcoming guests, "nothing can be done without liquor." While the preparations for the festival of Maghi which is marked on the first day of the month of Magh (which arrives after Poush) are underway, Tharu people in Kailali have been celebrating the eve with no less fervor.

Tharu settlements are decorated with lights and colorful paintings to give a warm welcome to the visitors. Singing, dancing and merrymaking at houses and public can be witnessed.

"Sakhiyai ho maghaka guriguri jaar' the saying which celebrates liquor has made the settlements lively and phenomenal. Special delicacies like the items of crab, fish, pork, pickles, and fried vegetables and so on are served during the eve and the festival.

Even other communities mark the first day of the month of Magh as Maghe Sakranti. However, unlike Tharus they do not mark it as the beginning of the new year.

The Maghi fever has gripped Tharu communities in Kailai as every year. On Tuesday, on the eve, they sacrificed pigs. The ritual is called 'Jita'. To celebrate Jita they remain awake overnight, singing and dancing. The dances are called Dhamar and Jhuma.

On Wednesday morning, as the beginning of the new year, Tharu people will go to a nearby river and take a dip. Then young generations go to the elder people for blessings. Married daughters are offered special foods and clothes.

KATHMANDU, Jan 14: The Maghe/ Makar Sankranti or Maghi, which is celebrated on the first day of the month of... Read More...