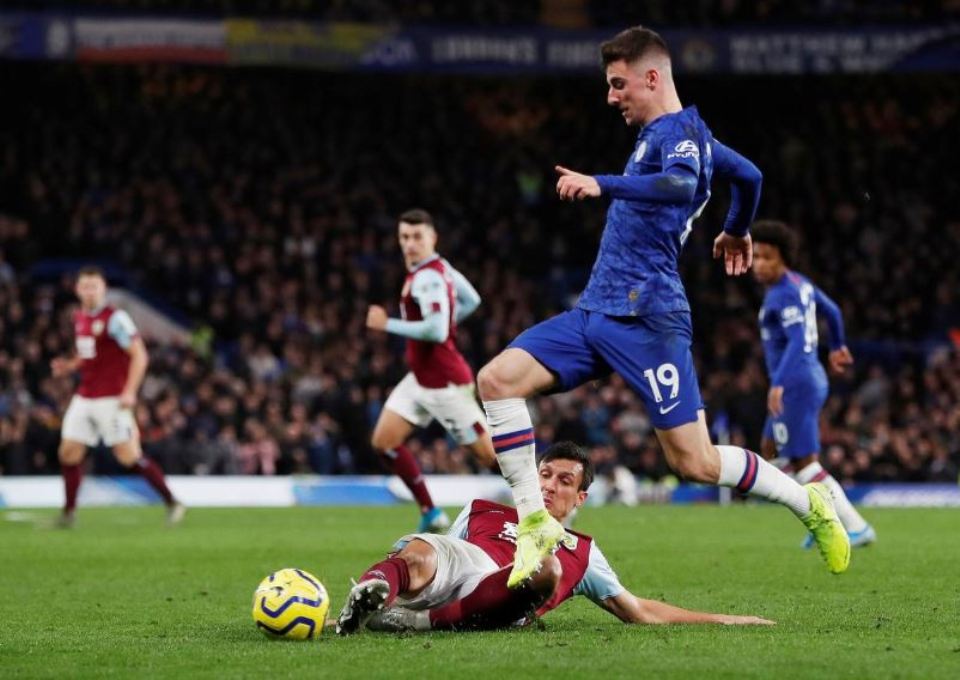 LONDON, Jan 12: Chelsea made amends for recent defeats at Stamford Bridge by thumping Burnley 3-0 on Saturday with goals from Jorginho, Tammy Abraham and Callum Hudson-Odoi’s first in the Premier League.

The hosts looked sharp from the start and won a penalty in the 26th minute when Matthew Lowton caught Willian’s legs as the Brazilian raced down the left. Italian Jorginho shimmied in the run-up to send Nick Pope the wrong way from the spot.

Chelsea top scorer Abraham headed the second from a Reece James cross, the ball slipping through Pope’s hands on the way into the net to give the 22-year-old England forward his 13th league strike of the season.

Abraham’s fellow youth-team graduate Hudson-Odoi made it three home goals for the west London side for the first time in the league this season when he poked in from a cross by captain Cesar Azpilicueta four minutes after the break.

Chelsea strengthened their grip on fourth place with the win, notching 39 points from 22 games to stay five points clear of Manchester United in the race for Champions League places.

Coach Frank Lampard, who saw his young side lose at home to West Ham United, Bournemouth and Southampton in recent weeks without scoring in any of those games, visibly relaxed as the Stamford Bridge fans chanted his name.

“It’s one performance at home and the message has to be continuous... but it’s a nice example of a standard that we have set,” Lampard told reporters.

“I’m not getting carried away. It just feels good, it feels nice to smile in a game and enjoy watching really positive football.”

Burnley, who were weakened by injuries and illness to several key players, enjoyed a couple of bright moments in the first half. Jeff Hendrick put the ball in the net in the 18th minute but captain Ben Mee was just offside in the build-up.

Mee came close in the 36th minute but Ross Barkley cleared his point-blank downward header off the line.

Burnley suffered their fourth league defeat in a row and are now in 15th place, just four points above the relegation zone, with coach Sean Dyche noting that his side had made a habit of going on bad runs before reversing their form.

“Last year it swung very quickly,” he said. “People killed us off said ‘no chance’ and then all of a sudden you’re off and running again and we’re eight unbeaten. The mentality has got to stay strong, that’s for sure.”

Influential Chelsea midfielder N’Golo Kante was left out of the squad after reporting a hamstring problem after training on Friday night. Lampard said he hoped the problem was only “a small thing but we will have to see how it goes”.