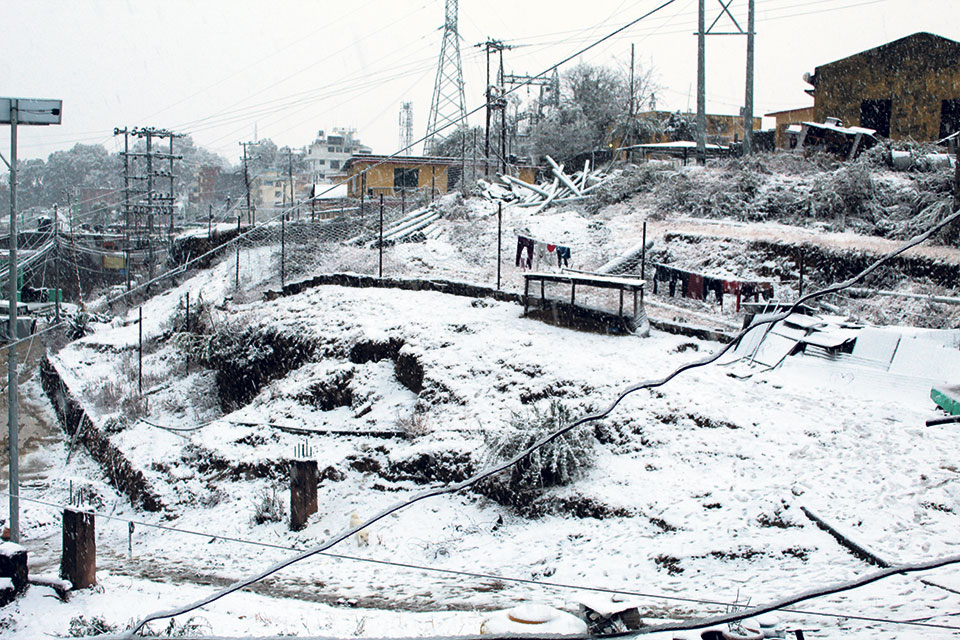 Khalanga, the headquarters of Dadeldhura district, is covered with snow in this photo taken on Thursday. Photo: Pushkar Bhandari/Republica

DHANGADHI, Jan 10: The hill districts of Sudur Paschim Province witnessed snowfall for the third time in this season. The snowfall has disrupted internet services in some parts of the region since last Thursday.

Following the snowfall, electricity and internet connections are disrupted in Bajhang for the last one week. Likewise, roads are also blocked in some parts of the region, making the lives of locals and commuters extremely difficult.

As the internet connection is disturbed, banks and financial institutions have failed to provide services to their customers for the last one week.

The snowfall, which started last Thursday, has obstructed Bhimdutta Highway which connects seven districts of Sudur Paschim Province. The snowfall has also obstructed roads in Bajhang, Bajura, and Baitadi, among other districts of the province.

As the temperature has fallen after the snowfall, locals have not come out from their houses. The passengers traveling from and to Sudur Paschim are stranded on the roads for four to five days.

“As the roads are obstructed by the snowfall, the passengers have been stranded on roads for a few days,” according to Padam Singh Khadayat, who reached Baitadi from Mahendranagar in three days.

After the snowfall, road connecting different parts of the district are obstructed. Likewise, internet connection and power supply are also disrupted.

As the temperature has fallen, the local administration of Dadeldhura has light fire in different market areas of the district.

Likewise, internet and telephone services remain disturbed in Bajhang for the last one week. As the internet connection is disturbed, banks and financial institutions have failed to provide service to their customers.

(Bira Gadal from Baitadi, Pushkar Bhandari from Dadeldhura, and Jagat Khadka from Bajhang contributed to this story.)

DADELDHURA, Dec 18: Snowfall in Sudur Paschim Province has affected normal life in the region. The snowfall, which started from... Read More...