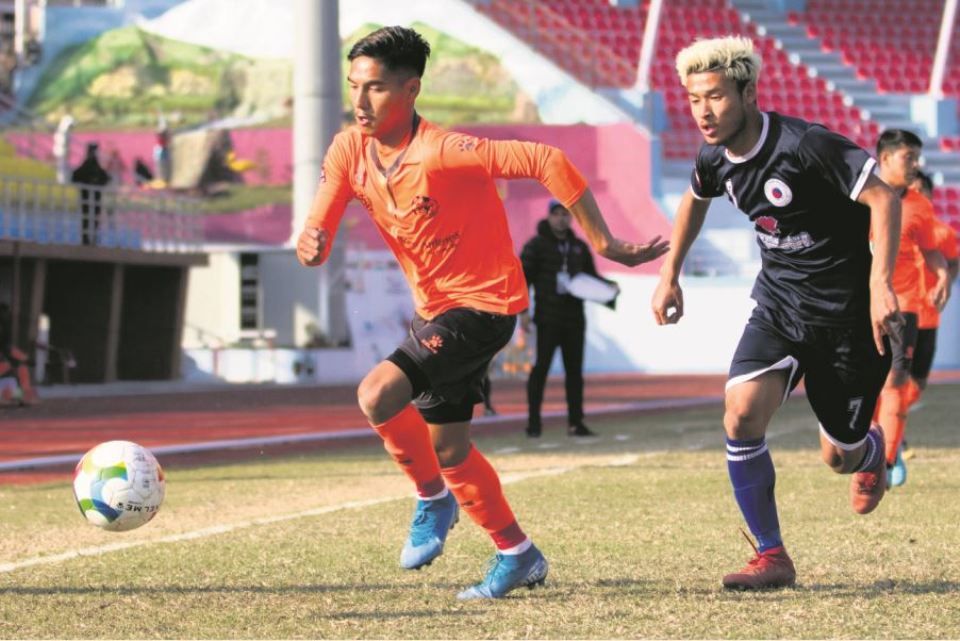 KATHMANDU, Jan 8: Friends Club and Himalayan Sherpa Club shared the spoils of a 0-0 draw as both the teams are still yet to win a game in the ongoing Qatar Airways Martyr’s Memorial A-Division League in Kathmandu on Tuesday.

In the third match of the fourth round, Friends could not utilize a number of good chances to score and was frustrating to watch in the final third as its string of passes went astray by the forwards.

The first half was somewhat dominated by Friends, who has not won in five league games now, as it took control of the possession in the game with quick passing through the flanks, but threw the chances away.

The first real chance of the game came to Friends however as Rumesh Bartaula produced a good run in the flanks, but his solid cross to Uttam rai was headed off target in the 18th minute.

Himalayan Sherpa quickly settled into the game and converted defense into attack. Suraj Hamal had a chance to score in the 20th minute, but his shot from outside the box went wide.

Friends got multiple free-kicks in the Himalayan Sherpa area, but the delivery let it down as the Sherpa defense did not fret to clear the ball away from danger.

Bishon Gurung had a real chance to score for Himalayan Sherpa in the 22nd minute, but a good defensive display from the Friends backline was able to block the shot and send it for a corner.

Friends got another chance 10 minutes later through Sanjog Maharjan, but he skied his effort and let the team down after a good passing display to create the chance near the Sherpa danger area.

There was a hassle inside the box in the 33rd minute for Friends, but the team could not convert the chance into shot as the Sherpa defense was quick enough to send the ball out for a corner.

Maharjan was again in the thick of things for Friends, but his shot from outside the box again was off target in the 38th minute, much to the frustration of the Brazilian manager Marcus Dantan.

Friends was totally authoritative in the first half with chances created one after another. Uttam got a real chance to easily give him team the lead, but his shot from right in front of the post went over the crossbar in the 43rd minute.

Maharjan was totally frustrating with his finishing as he missed three chances alone in the first half. He got a chance to score from right in front of the post in the second minute of the first half, but he missed again.

Himalayan Sherpa started to gather its pace and attacked in the second half with real purpose, but never really found a real opening in the game. Kamal Thapa Magar got a chance from free-kick in the 49th minute, but his shot went wide.

Friends got another chance in the 56th minute as Brazilian Feipe De Sauza produced a good cross, but the forwards could not guide the ball into the back of the net.

Maharjan got another important chance for Friends to take the lead, but his header from the close range was wide again in the 66th minute. Coach Dantan had enough of him and subbed him in the 69th minute for Sanish Shrestha.

Maharjan could have added a goal or two playing from right of the midfield four of Friends, but despite creating space to run through the flanks, he could not convert the important chances he got.

The story was more or less the same with Sherpa as it created good chances in the second period, but the forwards lacked in finishing and wasted its good period of possession football.

It was a terrific performance from the Friends keeper Dev Limbu as he saved two good chances in the space of three minutes.

He saved a shot in a one vs one situation in the 73rd minute, produced a brilliant dive to deny Bijay Shrestha after getting a good through ball two minutes later.

Himalayan Sherpa got a late chance to finally take the lead, but Bishon Gurung missed a shot from near the edge of the box in the third minute of added time.

This was the third straight draw of the fourth round as New Road Team started the round against Jawalakhel Youth Club, followed by an exciting 2-2 draw between the defending champion Manang Marshyangdi Club and Machhindra Club.

With the result, Himalayan Sherpa is in the 12th place with three points. It drew three times and lost two games. Likewise, Friends is second from bottom with two points accumulated from two draws and three losses.

On Wednesday, both Three Star Club and the departmental team Nepal Police Club will fancy their chances to reach the third place with wins in their respective matches against Brigade Boys Club and Chyasal Youth Club.