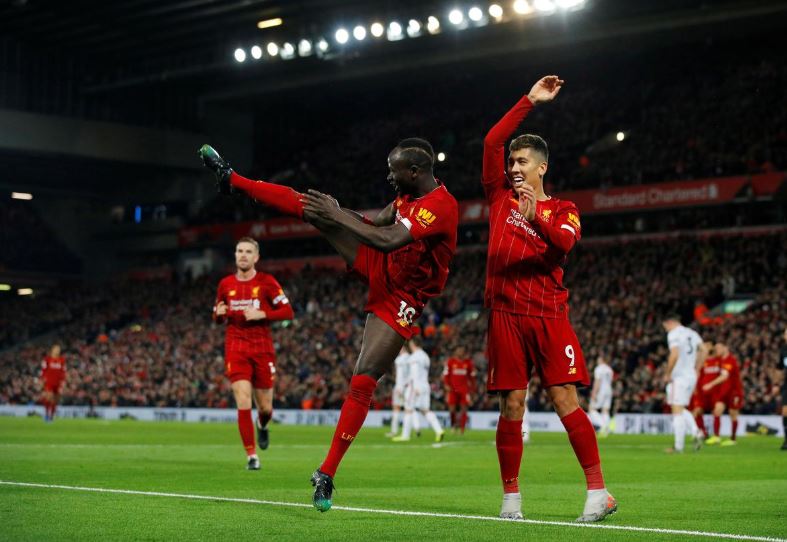 LIVERPOOL, Jan 3: Goals from Mohamed Salah and Sadio Mane helped Premier League leaders Liverpool restore their 13-point advantage at the top of the table as they saw off a valiant Sheffield United 2-0 at Anfield on Thursday.

Salah opened the scoring on four minutes, capitalising on a slip from United defender George Baldock. Mane tapped in from close range on 64 minutes after his original effort had been saved to secure a victory that marked Liverpool being unbeaten in the top flight for a year.

Jurgen Klopp’s side have 58 points from 20 games - a feat only matched by Manchester City’s 2017-18 title winning side - while Sheffield United sit eighth, seven points behind fourth-placed Chelsea.

Liverpool were far from their dazzling best but had too much quality for the newly-promoted outfit, which they illustrated by amassing a club-record 874 passes against The Blades.

“It was very unlike us. We didn’t lay a glove on them or do anything that has got us into this position,” Sheffield coach Chris Wilder told BT Sport.

“I thought they were outstanding. They didn’t have to get out of second or third gear, though. When we played them at our place we laid a glove on them and made it difficult, but they won every first ball, dropped on every second ball, ran forward and ran back. They did that miles better than us.

“They still had the humility and desire to do all that as world champions, as European champions and they’re well on their way to being Premier League champions.”

The only blot for Liverpool was when midfielder Naby Keita limped off during the warm-up. The Guinean was replaced in the starting line-up by James Milner, and was ruled out of Sunday’s Merseyside derby by Klopp post-match.

The opener came after Baldock slipped under Virgil van Dijk’s long ball, allowing Andy Robertson to break into the box and square for Salah, who swept in his 10th league strike of the season.

It marked the beginning of a lively opening 15 minutes in which John Lundstram saw a looping effort land just wide for the visitors, as well as having an equaliser correctly ruled out for offside.

Salah was denied a second by a spectacular Dean Henderson save before Georginio Wijnaldum fired narrowly over.

Salah then hit the post after the restart. But he showed excellent composure to feed Mane, whose initial effort was parried by Henderson - but he netted the rebound.

The home crowd were spared a nervy finale as substitute Oliver McBurnie contrived to steer Enda Stevens’ inviting cross straight at Alisson Becker from inside the six-yard box with two minutes remaining.