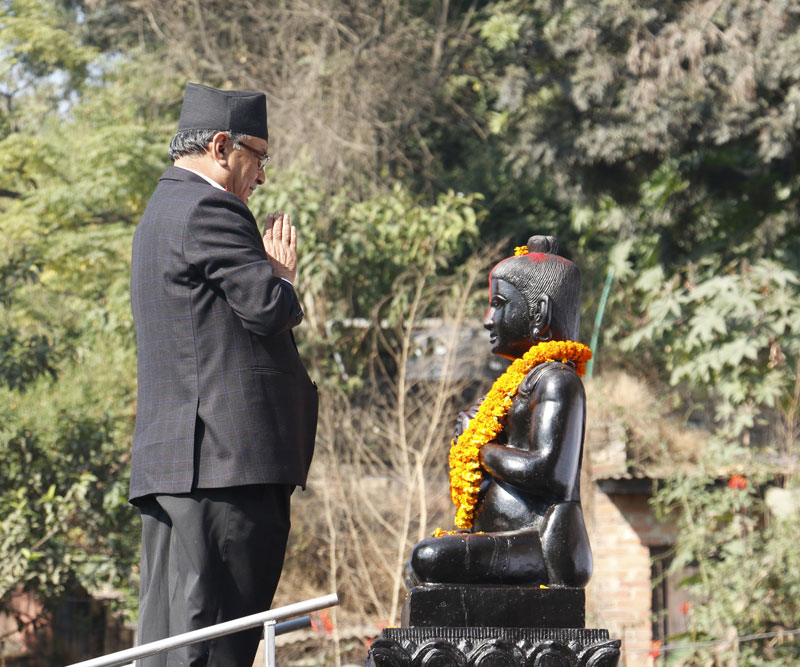 KATHMANDU, Oct 31: Prime Minister Pushpa Kamal Dahal has vowed to have the Nepal Sambat enshrined in the constitution through an amendment to the country's main law.

Addressing a special ceremony ' Bhintuna Sabha' organized by the Nhuda (New Year) National Celebrations Committee to mark the beginning of the Nepal Sambat 1137 here today, the Prime Minister highlighted the supporting role from the intellectual community and bodies concerned to bring the Nepal Sambat into practice.

"The government is in touch with political parties in and outside the government to readdress the rights of indigenous nationalities, dalits, women and Madheshi community," he said, adding that the amendment to the constitution is not so far.

He was of the view of taking the local poll and economic development efforts simultaneously right after the constitution amendment.

On the occasion, he pledged his best to address the demands put forth by the Committee that include featuring the Nepal Sambat year in the Nepali currency, incorporating topics on the national luminary Shakhadhar Sakhwa, the founding father of the Nepal Sambat, and on the Nepal Sambat, in school and college curriculums.

Earlier, a delegation from the Committee called on the Prime Minister, urging the government to construct a statue of Shakhadhar in the capital and establish an academy in his honor.

The Prime Minister took the opportunity to remind that during his first prime ministerial tenure, he declared the official recognition to the Nepal Sambat. "Now the need is to bring it into practice," he asserted, pledging his best role towards that end.

On the occasion, former lawmaker Buddha Sayami was honored with the 'Nepal Sambat Prize' carrying a purse of Rs 25,000.

Shankhadhar Sakhwa started a new era on the date when he cleared off the debts of all the people some 1137 years ago.

However, the government in 1929 BS had declared to recognize Nepal Sambat as the national calendar.

The people of all three districts in the Kathmandu Valley and its adjoining areas today celebrated the Nepal Sambat New Year 1137 by organising various programs.

Committee Chair and lawmaker Bhimsendas Pradhan said the Nepal Sambat does not solely belong to the Newar community instead it is common identity of all the entire Nepali people and must be brought into practice.

Industry Minister Nabindraraj Joshi, lawmakers, the Newar community people, intellectuals and litterateurs were among those attending the celebrations.

Earlier today, a rally was organized in the capital to mark the commencement of the Nepal Sambat 1137.

"I am ready to what degree I need to be flexible for forging unity for national consensus.

The parties need to be united for constitution implementation now the same way they had come together during the time of the earthquake and the constitution formulation," PM Dahal said.

The Prime Minister was of the view that the constitution should be taken towards implementation by increasing the acceptability of all and that accusing one another and spitting venom would not benefit anyone.

He also gave assurances to have a museum built in the name of Shankhadhar, to have his image printed in the bank notes and have a research centre established.

Minister for Culture, Tourism and Civil Aviation, Jeevan Bahadur Shahi on the occasion promised to take a proposal in the meeting of the Council of Ministers for setting up a museum in the name of Shankhadhar, having his image printed on bank note, bringing into practice the Nepal Sambat calendar and developing Thimi as a touristic area.

CPN (UML) vice-chairman Bhim Rawal commented that the country has not been able to move ahead as the government was under the evil shadow of the fixed 'nine-month term', and announcing a public holiday on the day the Indian President arrives on a visit to Nepal has undermined the country's nationality.

"The UML is ready for constitution amendment but it should be proved which of the Article in the constitution has cut back on the rights of a particular community, gender, language, religion, culture and caste.

CPN (Revolutionary Maoist) leader CP Gajurel said the decision to give a public holiday on the day of the arrival of the Indian President was wrong.