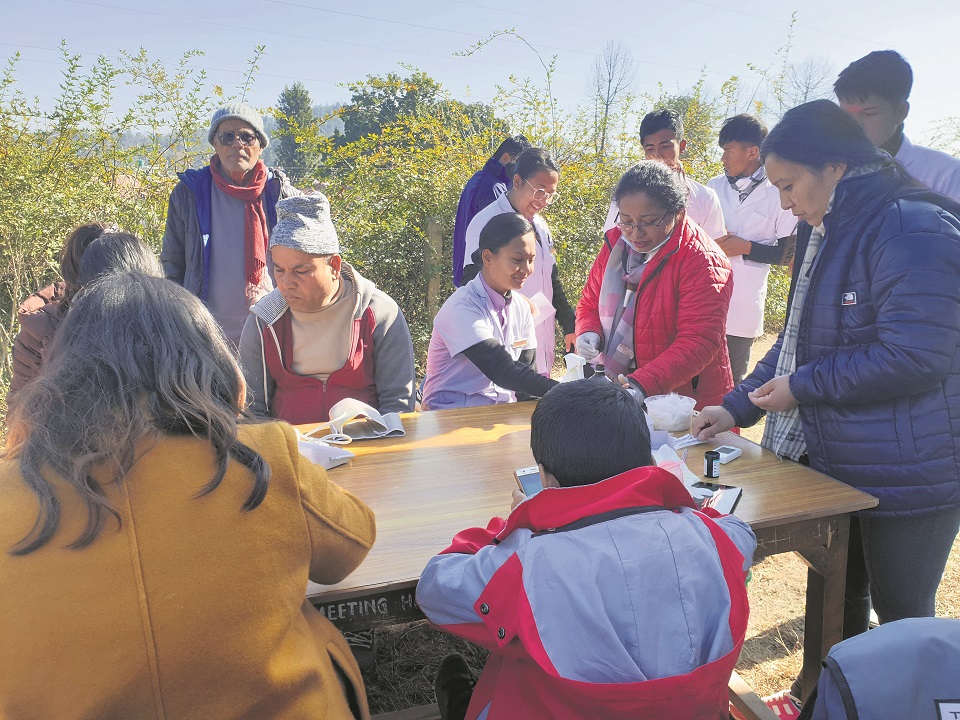 BANEPA, Dec 31: There used to be a time when nurses were identified only as helping hands to doctors. A common understanding that they are only someone who provides medicines to the sick was prevalent. However, as Dhulikhel Hospital for the first time conducted diabetes control campaigns, giving complete leadership to nurses alone, the narrow perception about nurses' roles can be seen undergoing a change. The campaigns are carried out through the aid of World Diabetes Foundation.

Director of Dhulikhel Hospital, Dr Ramesh Makaju said, “Unlike other non-communicable diseases, the symptoms of diabetes are not detected in time which makes the person unaware about their disease. So, it was necessary to mobilize nurses at the community level.”

“After the screening of diabetes in the community, those identified with the disease are asked to come to the hospital for further treatment.”

Dr Ava Shrestha, a researcher at the community department, said, “Change in lifestyle and eating habits due to increasing urbanization, are the major reasons behind diabetes in most cases. So we plan to organize awareness programs through 'Food Care Clinic' to those patients who come to the hospital and through 22 health centers (outreach).”

According to the department, in developing countries like Nepal, diabetes tops as the major non-communicable disease to affect peoples' health.

Dr Shrestha further said, “Due to the lack of proper investigation mechanism, it cannot be monitored if the diabetic patients have regularly taken their medicine or changed their lifestyle.  This ultimately leads to death from eye, kidney and heart diseases. Many such examples have been seen in the process of research. So, we have given special priority to the camps run from outreach centers. And patients who are under follow-ups are also prioritized. For this, we keep the patients under regular contact with the hospital through software and mobile applications.”

“The patients are contacted through sms to have their follow up. In case the patients don't come for a follow up, we try to be informed if they have gone elsewhere for treatment or left their treatment. More care is given to the eating habits of the patients along with eye care in the second phase. Qualified nurses have been entrusted for this role,” added Dr Shrestha.

The focal person of the program, Rabina Shrestha, informed Republica that since it was not enough for the hospital and outreach centers alone to spread diabetes awareness programs, local clubs were provided trainings too.

“For the first time, we organized orientation programs about diabetes for female health volunteers at Khopasi Primary Health Center. This program is aimed at 130 female volunteers in Dhulikhel, Banepa and Panauti. Two or three diabetes awareness clubs will be formed in each municipality under their participation. Again, the nurses will play a big role in this.”

Till now the hospital has conducted 11 screening camps at the health center, community and camps of Dhulikhel, Banepa and Panauti municipality.

“Some 600 people in Dhulikhel, 300 in Banepa and 208 in Panauti have undergone the screening test. The mobile numbers collected at those camps have been kept in the hospital's database. The flow of diabetic patients to the hospital has increased. We direct them to other departments like heart and eye and assist in the treatment,” added Shrestha.